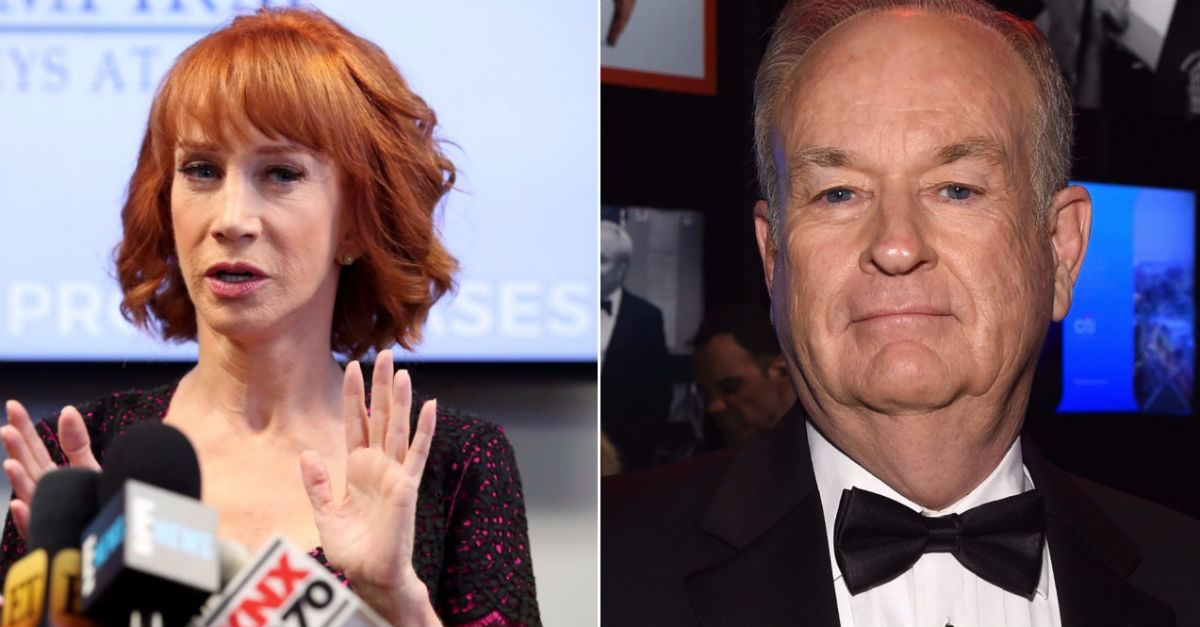 But against all odds, the disgraced comedian gave the disgraced (former) Fox News anchor a new nickname while explaining that she recently denied a request to appear on his podcast.

Griffin posted proof of the messages inviting her on the podcast, one over email and the other over Facebook Messenger. O’Reilly reportedly wanted to have her on to discuss “being blacklisted in Hollywood.”

Griffin then tweeted a sharp denial referring to O’Reilly as “Billy McRapey:”

I’m not that desperate, Billy McRapey. Oh and my Mom told me to tell you to f*ck off. She wasn’t even slightly tipsy when she said it. Gotta love Maggie. 97 years old, drinks half a box of wine a day, and still smarter & sharper than you are. You are an embarrassment to all Irish Catholics. Burn.

4/ my response. Oh, as if you needed that part explained to you;) pic.twitter.com/OgCulzsoUB

O’Reilly has had more time to work on his podcast, “No Spin News,” after being fired from Fox News earlier in the year.

Celebrity attorney Lisa Bloom represented several of O’Reilly’s accusers, including one employee who reported both sexual and racial harassment against him. A former clerk whose desk was next to O’Reilly’s said that he would call her things like “hot chocolate” when he walked by.

Griffin made news in May for posting a picture with a controversial display of a bloodied, severed head made in the image of the president. The picture faced extreme backlash almost immediately, launching a week-long media frenzy.

Though Griffin co-hosted CNN’s New Year’s Eve special with CNN anchor Anderson Cooper as early as 2007, CNN parted ways with the comedian amid the controversy. The network released a statement saying that they found the image “disgusting and offensive.”

RELATED: Kathy Griffin retaliates against Andy Cohen with NSFW allegations that appeared in her inbox