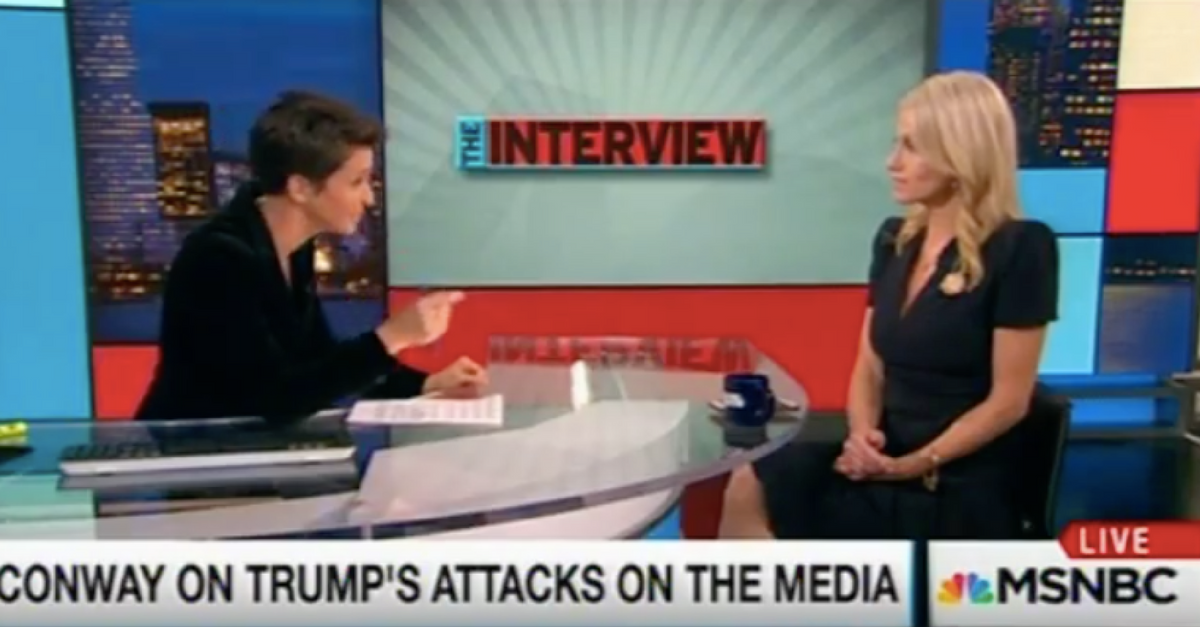 Kellyanne Conway made an appearance on MSNBC’s “The Rachel Maddow Show” Thursday night to address how Donald Trump’s relationship with the press will pan out during his presidency.

Maddow specifically cited Trump’s falsely claiming that ABC’s Martha Raddatz was “crying” after she learned that he had won the election, asking, “Is this how even a reporter like Martha Raddatz is going to be treated by this president?”

RELATED: Kellyanne Conway forcefully shut down a sexist question about how she will handle her White House position while being a mother

Conway assured her that not only will such behavior not continue, but that the Trump team has been in communication with ABC about the incident and has a tremendous amount of respect for Raddatz.

Maddow pressed Conway further, saying that Trump owes Raddatz a public apology because he told the story about her publicly. She argued that if such an apology is not made, many people who have heard his comments will continue believing an untrue story.

“Apologies like that are not made publicly,” Conway answered. “I’ve got an update to what you’ve presented there, is all I’ll say, and it would make you happy.”

She then broadened the conversation to address the press as a whole, explaining why Trump held so many rallies both before getting elected and on his Thank You Tour.

“In terms of his relationship with the press,” she began before pointing out that Trump got a large amount of negative press coverage during his campaign. “It is frustrating, oftentimes, if you’re in Trump world, to not be able to get your message out, which is why he ended up taking it directly to the people.”

RELATED: Kellyanne Conway wasn’t having it when a CNN host brought up the Trump boys

Maddow was not satisfied and brought up Melania Trump’s lawsuit against a blogger, asking, “Is the Trump family going to try to sue, to bankrupt, news outlets and bloggers?”

“That’s not the goal here,” Conway answered. “She has a right to defend herself.”