Menu
Follow us
Search
Menu
Search
FILE - In this June 30, 2010 file photo, Senate Judiciary Committee member, Sen. Jeff Sessions, R-Ala., is seen on Capitol Hill in Washington. Sessions told reporters Thursday, the president should take responsibility for the Secret Service, GSA and energy company Solyndra scandals and insist on a government culture in which taxpayer dollars are not wasted. He said, "I don't sense that this president has shown that kind of managerial leadership." (AP Photo/Susan Walsh, File)

U.S. Attorney General Jeff Sessions, the latest in President Donald Trump’s administration to get caught in the expanding web of the Russia scandal, recused himself from any investigations involving Russian interference. He gave an exclusive interview to Tucker Carlson on Fox News to explain his position.

Sessions said his decision to recuse himself was not an admission of any wrongdoing. Carlson asked Session why he never attempted to amend his statement at his confirmation hearing after retired Gen. Mike Flynn was forced to resign as national security adviser when it was discovered he lied to Vice President Mike Pence about his contact with Russian Ambassador Sergey Kislyak.

“No, I never gave that a thought,”  Sessions told Carlson. “Never considered it. I don’t believe anyone ever mentioned it to me. Quite different circumstances to me, Tucker, unrelated. I had a meeting in my office with two senior staffers, both retired military people, non-political, and we had a meeting with some 25 ambassadors in recent months, while I was Senator, and the Russian ambassador was just one of them.”

RELATED: Those of us who thought Jeff Sessions knew what he was doing, played for fools

At Sessions’ hearing, Sen. Al Franken, a Democrat from Minnesota, brought to Sessions’ attention a breaking news story from CNN about continual contact between the Trump campaign and Russia, and asked him if he knew of any Trump surrogates who had contact with Russians. Sessions said no, and then offered that he didn’t have any contact.

“The question that came to me from Senator Franken, he went into great length saying that that day a new story had come out and said that various Trump surrogates were meeting continually with Russian officials as part of the campaign. And he raised that question with me, and my answer went straight to that. It was the first time I had heard that, so I focused on that I had not had any such meetings, was not meeting with any Russian officials, on a continuing basis to advance any campaign agenda.

“Sometime before that I had met, in my office, and in an official way, with the Russian ambassador, and so, that was, the answer I gave, and I think it was an honest answer, Tucker, I thought I was responding exactly to that question, and it really became a big brouhaha. And I was glad to have a chance to respond today and explain it.”

Then Sessions reiterated to Carlson what was reported Thursday, that Sessions had twice talked with Kislyak, once in Sessions’ office and again in Cleveland following the Republican National Convention.

“I don’t believe anybody that was in that [Senate office] meeting would have seen that I [did] one thing that was improper,” Sessions told Carlson.

Trump responded by bashing the Democrats and declaring this a “witch hunt!” 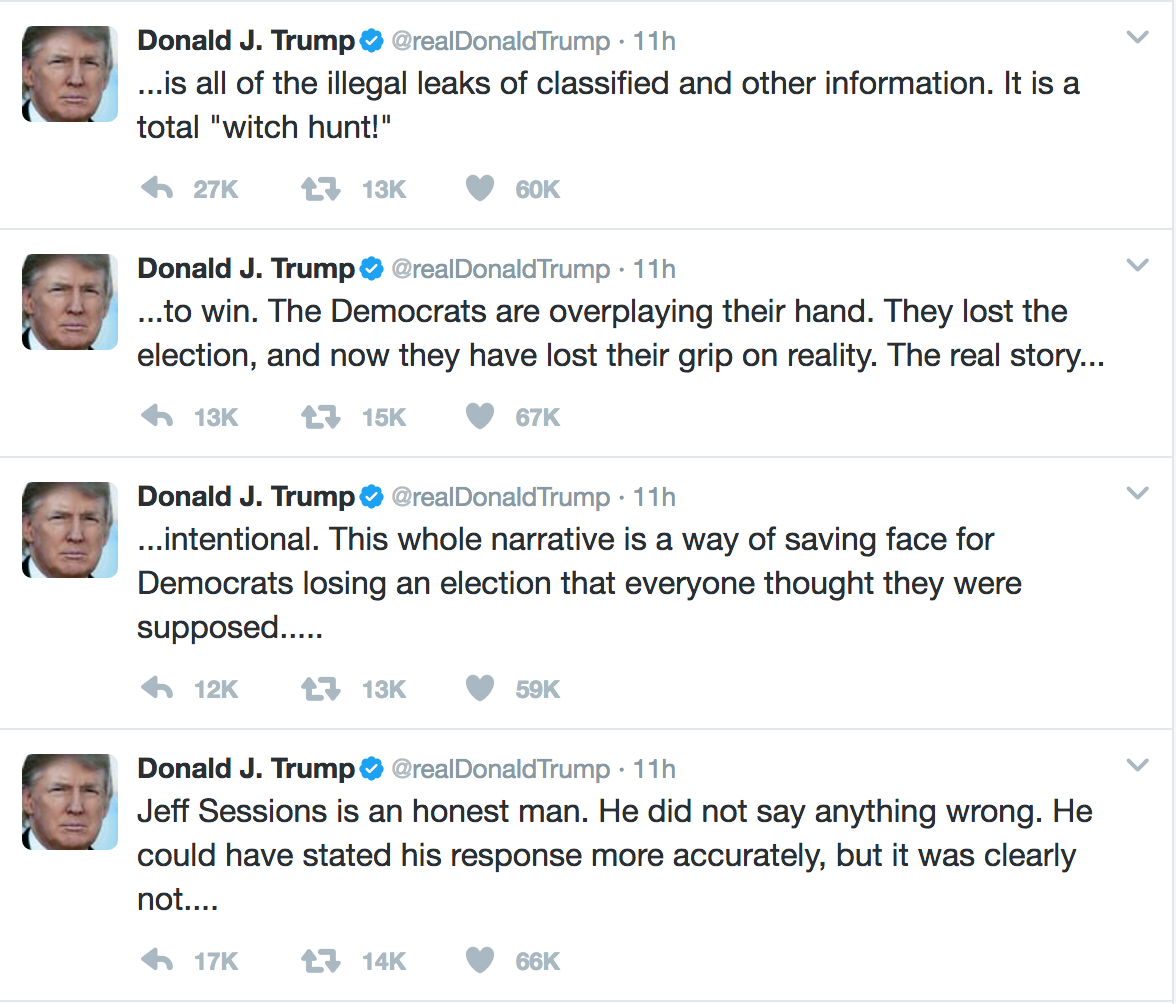 Carlson asked Sessions if agrees with the president that he was the victim of a witch hunt.

“I do not think what was said about that meeting I had with the Russian ambassador was legitimate,” Sessions said.

Here’s the question Franken posed to Sessions during the confirmation hearing.

As for his recusal not being an admission of wrongdoing, Sessions told Carlson:

“It’s simply that whether or not you can be perceived as fairly deciding a case or evaluating a case. And so I committed to doing that after I became attorney general, and I’ve only been there three weeks. We met with professional staff, ethics people, to discuss this issue and we had a full meeting a week or so again. We planned to have a meeting today, it was on our schedule to make a final decision about whether or not I should recuse myself. And the reason I believe that I should recuse myself is because I was involved in the campaign to a degree I think it would have been perceived is that I wouldn’t be objective in participating in an investigation that might involve the campaign.”

“I do not confirm or deny any investigation. I just felt like I should clear the air and we were moving towards that end even before this latest flap,” he added.