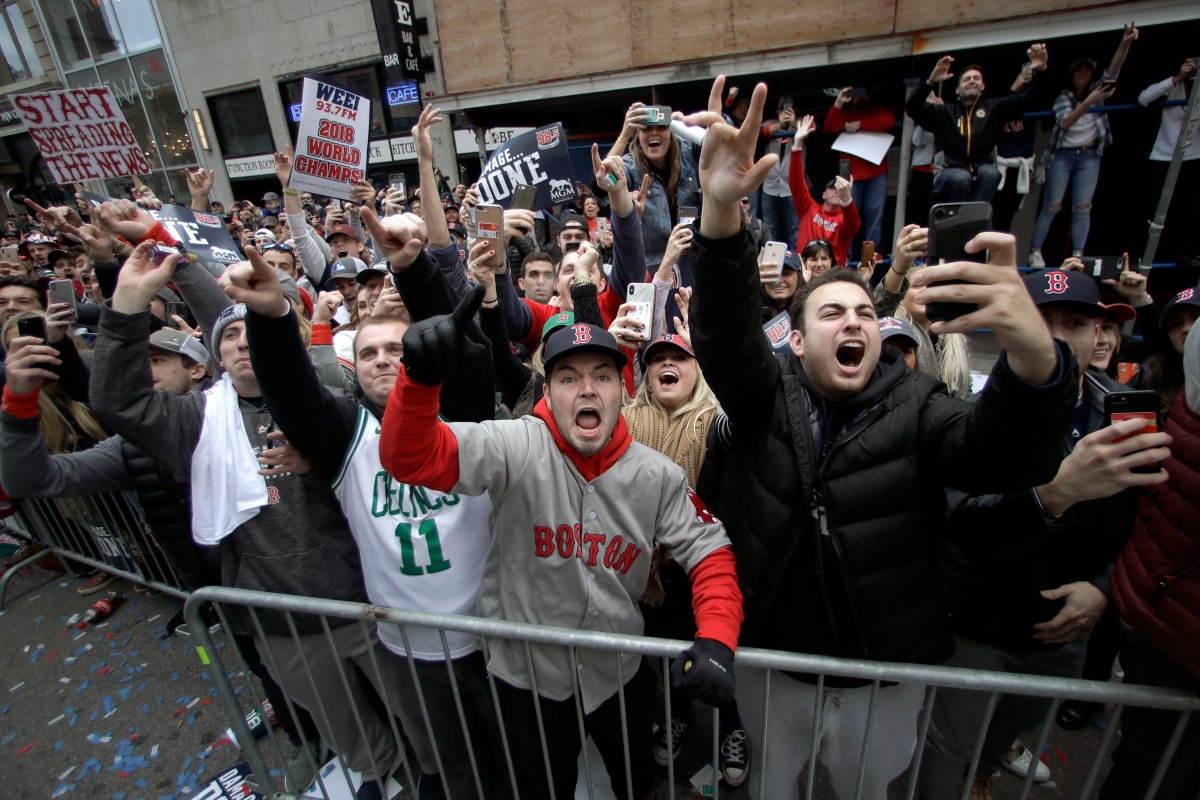 BOSTON (AP) ? The Latest on the Red Sox parade in Boston celebrating the team’s World Series win (all times local):

Security was heavy for Wednesday’s duck boat parade carrying the victorious Red Sox through downtown. Police reported no arrests or incidents, but a fan reportedly tossed a full can of beer at one of the boats, and it struck and slightly damaged a World Series trophy.

Hundreds of thousands of jubilant fans skipped school and work to cheer for the team, giving this year’s Halloween a special flavor on a crisp autumn day. Many wore Red Sox gear instead of Halloween costumes.

The Sox defeated the Los Angeles Dodgers in Game 5 on Sunday to bring another championship home.

Hundreds of thousands of people lined a parade route Wednesday for a glimpse of their favorite players riding in the city’s iconic amphibious duck boats.

Confetti rained down on the crowds, who screamed their approval and snapped selfies as the procession wound its way through downtown Boston. Players autographed balls and tossed them into the cheering throng.

Security was tight along the route, which took the team past the site of the deadly 2013 Boston Marathon bombings. Authorities had not reported any arrests or incidents as of midday.

The Red Sox beat the Los Angeles Dodgers 5-1 in Sunday’s Game 5 to win their fourth World Series title in 15 years.

Boston is celebrating a not-so-spooky Halloween as the city gleefully cheers its fourth World Series title in 15 years.

Red Sox caps, jerseys and jackets are the favored costumes as hundreds of thousands line the streets downtown for a duck boat parade honoring the championship team.

Jarrick Fidalgo, of New Bedford, was one of many taking advantage of the fact that Wednesday’s parade fell on Halloween.

He wore a Sox jersey and ski hat, but also had his face painted up like the Joker from “Batman.” Fidalgo says it’s his first championship celebration.

The Red Sox beat the Los Angeles Dodgers 5-1 in Sunday’s Game 5 to win their latest title.

Confetti cannons are booming in Boston as huge crowds cheer the Red Sox and their World Series title.

Bits of red, white and blue paper are raining down on fans who have been packing downtown streets on a crisp autumn morning for a glimpse of the ballplayers riding the city’s emblematic amphibious duck boats. The players and members of their families are waving down from the open-roofed vehicles.

Security is heavy for Wednesday’s celebratory parade, with uniformed police officers lining the route and plainclothes officers mingling with the crowds.

Fans are decked out in Red Sox gear, and many have been making anti-Yankees chants, reflecting the fierce and long-running sports rivalry between Boston and New York.

The Red Sox won their fourth championship in the past 15 years with a 5-1 win Sunday over the Los Angeles Dodgers in Game 5.

Sports fans grown accustomed to the success of their beloved teams are lining the streets in the hundreds of thousands to salute the Boston Red Sox on their fourth championship in the last 15 years.

Wednesday’s parade began at venerable Fenway Park and was winding along several major downtown streets. Players, coaches and team officials climbed aboard amphibious duck boats to show off the team’s latest World Series trophy, secured Sunday with a 5-1 win over the Los Angeles Dodgers in Game 5.

Police promised tight security, with no public drinking allowed. Fans are also being asked not to bring in large items such as backpacks, coolers and strollers. Roads were closed and parking limited on many streets in and around the route.

Some fans arrived before dawn to stake out the best vantage point, many clad in Red Sox jerseys, sweatshirts and caps.

During a pre-parade ceremony at Fenway, Red Sox manager Alex Cora thanked fans for supporting the team during what he called a “historic season.”