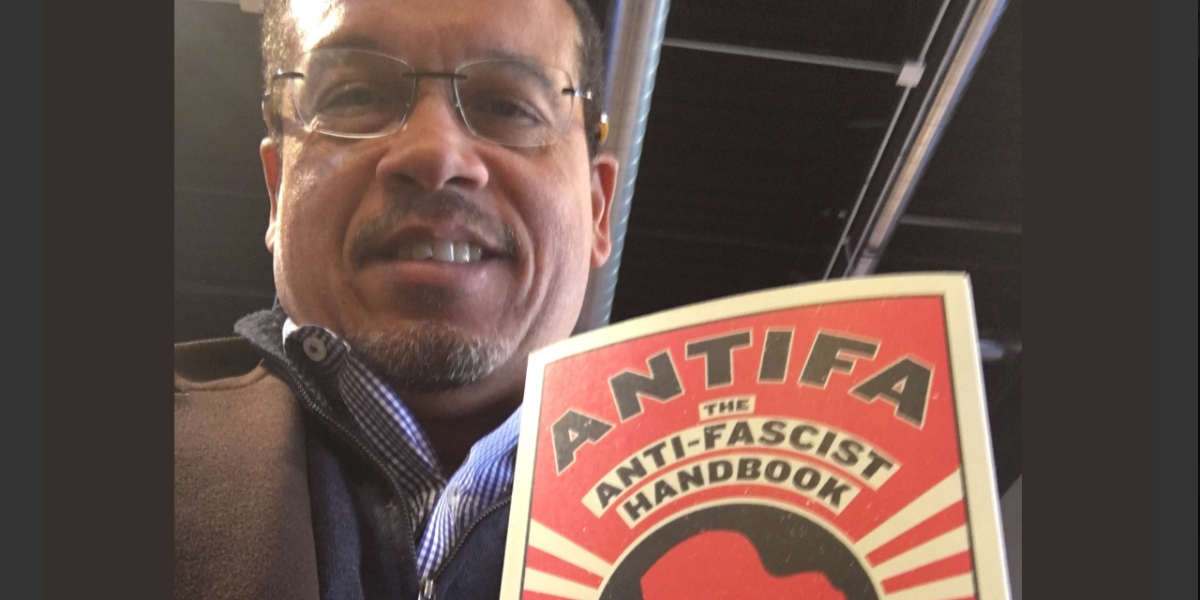 Democratic National Committee Deputy Chair Keith Ellison wants his political opponents to be afraid. The Minnesota Representative recently tweeted a picture of himself holding a copy of the controversial book Antifa: The Anti-Fascist Handbook by Dartmouth professor Mark Bray, with the caption, ?At @MoonPalaceBooks and I just found the book that strike [sic] fear in the heart of @realDonaldTrump.?

At @MoonPalaceBooks and I just found the book that strike fear in the heart of @realDonaldTrump pic.twitter.com/r81nYoeqpL

Other liberal politicians, such as Massachusetts Sen. Elizabeth Warren and Vermont Sen. Bernie Sanders have condemned the methods of Antifa. Meanwhile, Ellison shows a troubling implied toleration of their violence. This comes at a time when the people Ellison is supposed to represent are rightfully worried about political attacks. A June poll showed 76 percent of likely U.S. voters felt that political violence was on the rise, whether from Antifa or their counterparts on the right. Ellison?s acceptance of this illiberalism is not only startling because of the blatant brutality, but also because of the chilling effect these actions have on free expression. A culture of constant fear can lead to a world where anyone who holds a controversial viewpoint is hesitant to voice it, whether it’s actually racist like Richard Spencer?s support for a white ethno-state, or not.

Certainly, the views of the alt-right and other far-right bastions of hate are repulsive, but combatting gross political views with overt violence is antithetical to the values of a free society. In his book, Bray commends the violent actions of anti-fascist activists globally and expresses confidence in the activists? ability to only target actual fascists with their beatings. But, as the Daily Beast?s Anthony L. Fisher put it ?fascism can be a very nebulous term.? And when a term is defined as loosely as Antifa defines ?fascism,? it becomes nearly impossible to draw a bright line between those who are ?punchable? and those who are not.

Given Antifa?s track record in the United States, there is little cause for optimism that these activists won?t begin bludgeoning anyone with whom they disagree. In August, the group attacked and beat non-violent protesters during a ?No to Marxism? rally in Berkeley, California. The ?No to Marxism? event was organized by a self-described ?transsexual female who embraces diversity,? and who told fascists and KKK members they were not welcome at the march — hardly someone worth punching. Or, take this case, also from August, where Antifa members brutally beat and dragged an older woman, holding an American flag during a ?free speech? rally in Boston. The woman was not acting in any sort of violent way nor holding any signs that could be misconstrued as ?fascist,? she was simply holding an American flag.

Antifa has also targeted political opponents with fear-mongering. In November, a Eugene, Oregon chapter of the group, called for the firing of a professor who certainly had some illiberal views, but was by no means a fascist. In addition to calls for his firing, the professor, Jeffrey Borrowdale, said he has received threatening messages and has seen his personal information posted on the internet. A month earlier, Antifa targeted members of the Columbia University College Republicans with threatening messages after the conservative group invited alt-right figure Mike Cernovich to campus. Cernovich?s views, particularly on race, are repulsive, and it was misguided for these students to invite him to campus. However, Antifa shouldn?t paint all of the Columbia University College Republicans as oafish far-right wingers because their chapter invited Cernovich. In a society of toleration, groups invite speakers they may not necessarily agree with to speak and exchange ideas, no matter how awful those ideas may be.

If we turn a blind eye to political violence when it?s committed against disfavored and repulsive ideologies, we?re setting a dangerous precedent. For example, politics of fear and violence kept gay people in the closet for decades. Brutish police raids of gay bars, beatings of suspected homosexuals and a fear of being outed, kept most of the LGBT community underground for the better part of American history. If Antifa is willing to justify political beatings of fascists, it?s easy to see how this could be perverted by others to target any disfavored group.

Antifa?s actions show a tenuous grasp of what actually constitutes a fascist or a Nazi. Certainly, there?s a trolling movement on the right that seeks to get a rise out of people by acting like Nazis, but reacting to weak trolls only emboldens the actual fascists. Ellison?s tweet shows he is either unaware of Antifa?s track record or he is supporting a culture of political fear and violence. Either way, shame on him.

Dan King is an advocate for Young Voices and a journalist residing in Arlington, Virginia. He writes about free speech, mass surveillance, civil liberties and LGBT issues. He can be found on Twitter @Kinger_Liberty.