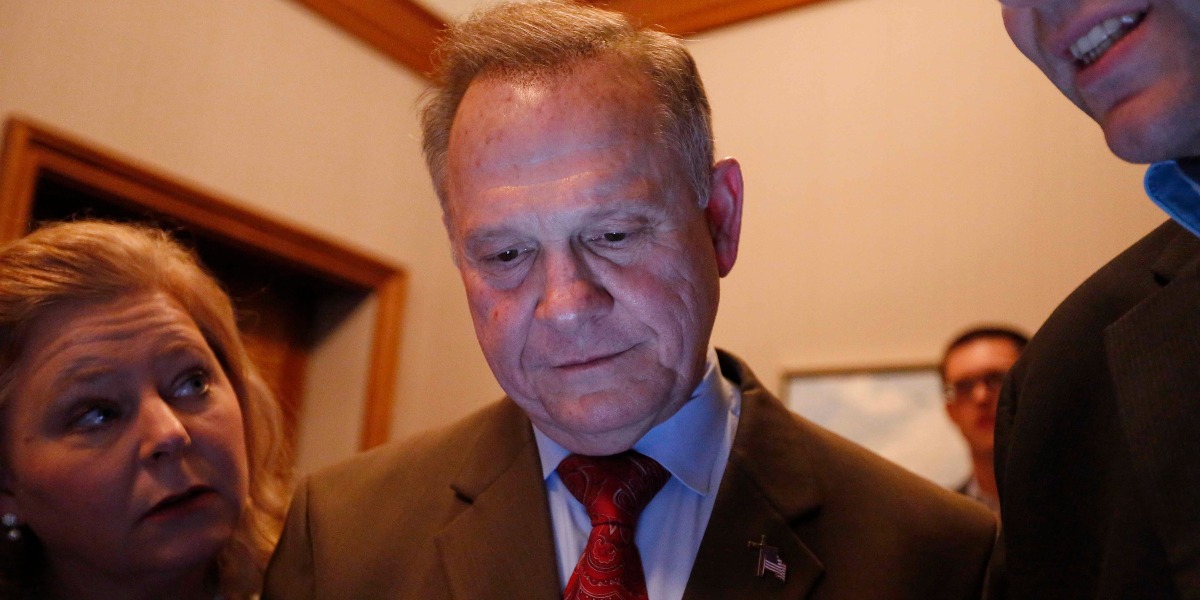 Why did Democrat Doug Jones win the Senate election in deep red Alabama last night? Advance predictions had his Republican rival, Roy Moore, at an 80 percent chance of victory despite the laundry list of sexual misconduct allegations leveled against him involving girls as young as 14. Jones was giving it the old college try, many thought, but come on, it’s Alabama.

And yet, Moore lost. So why did last night go the way it did? Here are four theories to consider.

1. It’s anti-Trump backlash. Though he endorsed his competitor in the GOP primaries, toward the end of the campaign, President Trump became one of Moore’s most enthusiastic boosters. Trump continues to have embarrassingly low poll numbers—as of this writing, the RealClearPolitics average has him under 38 percent approval—and even if his personal base remains committed, they are not the majority in a statewide general election with unexpectedly high voter turnout by Democrats. Not even in Alabama.

Still, as Bloomberg’s Megan McArdle commented on Twitter shortly after the race was called, this factor should not be overestimated. “As stunning as this result is,” she argued, Democrats are deceiving themselves if they plan for 2018 by attributing Jones’ win entirely to this one dynamic. After all, you can’t “count on Republicans to nominate accused child molesters in every seat in the House.”

2. It’s the alleged pedophilia. Speaking of accused child molesters, the accusations against Moore undoubtedly played a role in his loss. While most Alabama voters told exit pollsters the allegations were not the primary factor in their vote, 89 percent of those who believed Moore’s accusers voted against him, and 94 percent of those who don’t believe the women voted for him.

The allegations against Moore were likely particularly motivating because of his own commentary on other people’s behavior. Even for voters who completely share his sexual ethics, the apparent hypocrisy here—Moore acting as a moral authority while facing credible allegations of his own grave sexual misconduct—may have simply been too much.

3. It’s a generational thing. Exit polling shows six in 10 Alabama voters between 18 and 44 voted for Jones, while those 65 and older did the same for Moore. Some of this is younger voters’ typical predilection for voting blue—the age breakdown for 2016’s presidential vote in Alabama is similar—but if I had to guess, I’d say younger Republicans were overrepresented among the 22,000 write-in voters who, perhaps following the advice of Sen. Richard Shelby (R-Ala.), wrote in a “distinguished Republican.”

“Listen to your younger members. We want good candidates who represent our values,” wrote Alabama political consultant Elizabeth BeShears to her state’s Republican Party last night. “We want better,” she continued, and whether “better means a Republican or a Democrat matters less to younger people than it did to our parents.” Millennials make up the largest generational chunk of those 18-44 voters, and we are historically politically disaffiliated. The days of being able to win with a candidate like Moore in a large-scale race are waning or maybe gone.

4. It’s a values thing. Some 81 percent of self-described white evangelicals (“Values Voters”) who voted in Alabama went for Moore, which is exactly the percentage that voted for President Trump. Non-white Christians, and especially churchgoing black women, went overwhelmingly for Jones. Like many, I’m wary of labeling myself an evangelical these days—I pretty much fit its historic definition, but I’m baffled and saddened by its present political implications. After last night, color me more baffled and saddened still.

Had Moore been elected, it is safe to say he would not have done anything of real legal value for white evangelicals. Like Trump, he could only make Values Voters feel good with a pageant politics in which he is their champion against the Bad Godless Liberals. It is exceedingly unlikely he could have achieved meaningful policy change on their top issues, abortion, and religious liberty.

That futility makes even more troubling white evangelicals’ partisan power lust and the willingness to support candidates like Moore that it engenders. White “American evangelicalism is old and sick and weak, and doesn’t even know it,” wrote Russell Moore of the Southern Baptist Convention on Monday. “We clamor for the kind of power the world can recognize while ignoring the very power of God that comes through Christ and him crucified.”

I’m not saying a vote for Jones was the definitive choice for voters serious about their values—were I Alabamian, I probably would have cast a write-in or third-party ballot. But voters who value more important things than Republican power rightly recognized that a vote for Moore was not an option.