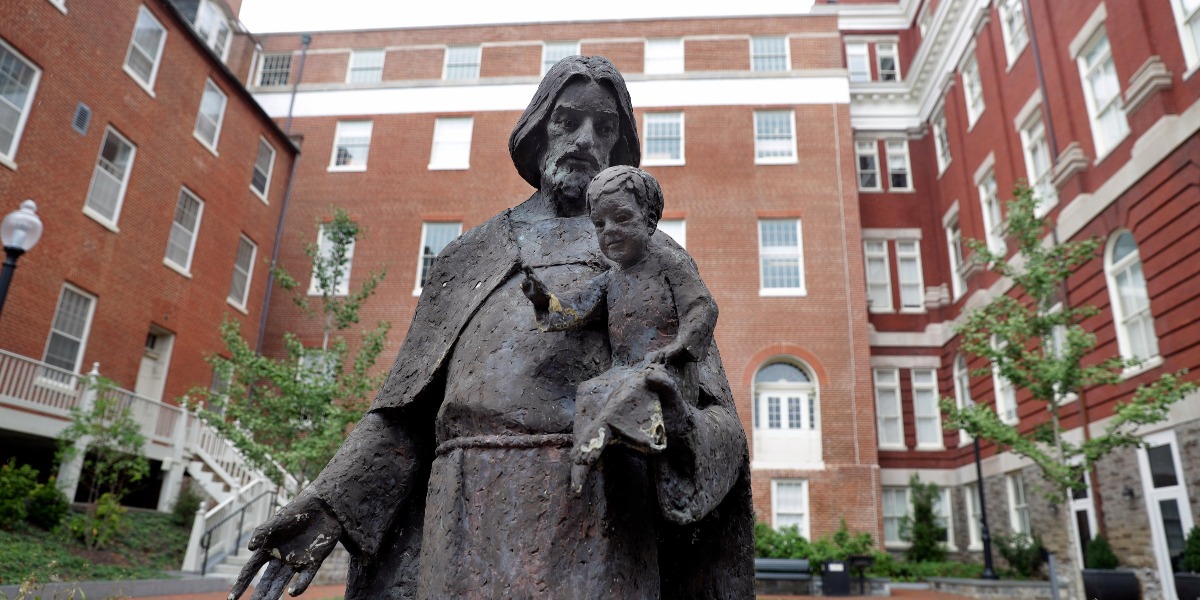 AP Photo/Jacquelyn Martin
A Jesuit statue is seen in front of Freedom Hall, formerly named Mulledy Hall, on the Georgetown University campus, Thursday, Sept. 1, 2016, in Washington. After renaming the Mulledy and McSherry buildings at Georgetown University temporarily to Freedom Hall and Remembrance Hall, Georgetown University will give preference in admissions to the descendants of slaves owned by the Maryland Jesuits as part of its effort to atone for profiting from the sale of enslaved people. Georgetown president John DeGioia announced Thursday that the university will implement the admissions preferences. The university released a report calling on its leaders to offer a formal apology for the university's participation in the slave trade. (AP Photo/Jacquelyn Martin)

Last week, the university where I currently take graduate courses made headlines for all the wrong reasons.

Two Georgetown University students filed a complaint earlier this month against Love Saxa, a student group that endorses traditional Catholic teachings on sex and marriage, accusing the group of discrimination and intolerance and calling for it to be defunded.

?[W]e often get the reputation as the abstinence club or the anti-same-sex-marriage club, depending on whom you ask,? Love Saxa President Amelia Irving wrote in a September op-ed in Georgetown?s student newspaper, The Hoya.

Irving did admit that the group?s ?definition of marriage does not include same-sex couples,? but went on to express her hope ?that there are members of the LGBTQ community that agree with Love Saxa on the issues that we hope to address this year: pornography and the hookup culture.?

You would think that this method of maintaining respectful, principled disagreement while searching for common ground would be enough to calm the raging storm of totalitarian identity politics. But in this case, you would be wrong.

In a piece published on October 20 bearing the headline ?Defund Intolerance,? the Hoya?s editorial board used a passage in Love Saxa?s constitution referencing their belief in the ?primacy of marriage ? as a monogamous and permanent union between a man and a woman? to accuse the group of ?denying individuals? rights on the basis of their sexual orientation.?

To their credit, the editorial board acknowledged that Georgetown is, in fact, a Catholic University, but this inconvenient truth didn?t slow them down a bit: ?Though Georgetown? respects the church?s view of marriage, its student groups nevertheless have a responsibility to care for and protect the entire student body.?

Even after only half a semester on campus, I?ve already seen numerous examples of this exact brand of cognitive dissonance. Catholic chapels share campus space with meditation rooms and Muslim prayer centers, and priests stroll past posters for lectures on queer theory.

This is not a question of free speech. The government is not involved, and Georgetown has no obligation to fund any student group. The situation does, however, reveal the totalitarian ideology of identity politics. They?re willing to generously allow Georgetown to continue as a Catholic institution, but only if it agrees to ignore or constantly apologize for official Church teachings.

Fortunately, even the most liberal voices in the Catholic Church have denounced the attempt to defund Love Saxa. ?Why should a student group that espouses Catholic teaching respectfully be defunded by a Catholic university? As long as Love Saxa treats LGBT people (both on campus and off campus) with ‘respect, compassion and sensitivity,’ as the Catechism requires, then they should be able to have their say on campus,? Fr. James Martin, S.J., a Jesuit priest known for his liberal views on LGBT issues, told the Catholic News Agency.

Love Saxa is still awaiting a decision from the University, but if Love Saxa is punished for respectfully defending a Catholic view of sex and marriage, then the Church might as well pack up its bags and abandon Georgetown to the cult of identity politics.