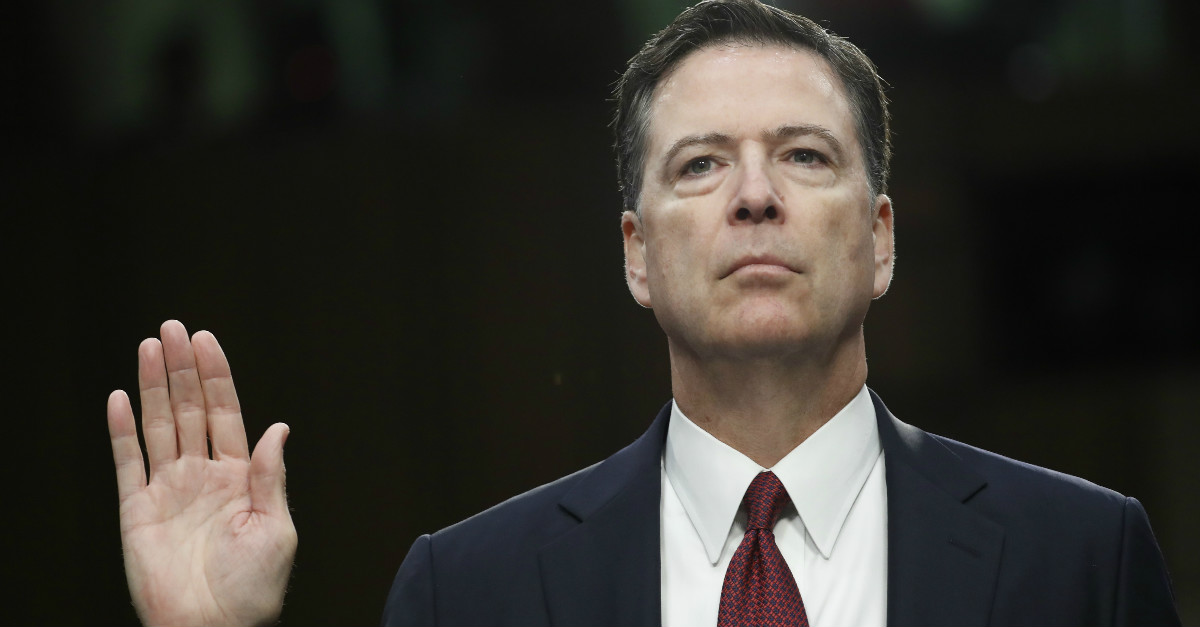 I realized over the weekend that it was all Aaron Sorkin’s fault. That conclusion is almost universally applicable, but in this case I’m directing it at Washington’s breathless binge-watching of James Comey’s testimony before the Senate Intelligence Committee last week, personally witnessed by me at Capitol Hill’s Union Pub. The whoops that greeted Comey’s bon mots, the laughter at his jokes, the little rounds of applause from the giddy interns—denied a Jed Bartlet in the White House, D.C. found one in a former FBI director.

Television has become like a bicycle pump for the Washington ego. “House of Cards” glamorizes our generally banal jobs. “Veep” lets us laugh at ourselves without ever really thinking we’re the butt of the joke. Comedians like John Oliver ceaselessly reinforce our prejudices. But it’s “The West Wing,” whose series finale aired almost exactly 11 years ago today, that casts the longest shadow. Its core theme, that government workers aren’t just paper pushers but quick-thinking, repartee-swapping, morally unimpeachable paper pushers, amounts to something of an ethos here. The public might have repeatedly held us in contempt, but a little of that Josh Lyman idealism still flickers defiantly, nourishing our self-image.

Comey is exactly the sort of cerebral, principled bureaucrat-plus Sorkin might have dreamed up. And because everything on “The West Wing” is instantaneously solved when the characters speechify their opponents to the bottom of the ocean, it was naturally assumed he would do the same. His nemesis Donald Trump was that socially conservative radio host whose world Bartlet ended in 90 seconds by quoting Bible verses she didn’t know—only instead of Exodus, Comey would rattle off quotes from his memo. Then cut to a vanquished Trump, cue the soaring music, and roll the credits. Just make sure you don’t miss any of the tantalizing banter. “Guys be quiet! Remember why we came here!” one patron commanded Union Pub during a line of questioning. (Imagine demanding total silence at a bar.)

There are two problems with this approach. The first is that, as with Will McEvoy’s tirade in the first episode of “The Newsroom” that contained statistics Sorkin literally read upside-down, Comey’s testimony also had some backfire to it. Above all was its implications for Loretta Lynch, who Comey said instructed him to call the probe into Hillary Clinton’s emails a “matter” rather than an “investigation.” (Was she ghost-writing one of those Robert Ludlum novels with the horribly bland titles? “The Chappaqua Matter.”) With even Dianne Feinstein saying the committee should now expand its probe into Lynch’s alleged tampering, Washington’s determination to focus all its fire on Trump may have hit a snag. Unlike on “The West Wing,” the real government can’t be so easily divided into enlightened heroes and benighted villains.

The second problem is that right-wingers do not immediately burst into flames upon encountering Sorkin-style dialogue; in fact, they tend to fight back and have even been known to take majorities of the electorate along with them. Likewise, post-Comey, the Trump administration rolls onwards. There’s no questioning the severity of what Comey said: an FBI director calling a sitting president a liar is unprecedented indeed. But the obstruction of justice case against Trump remains wobbly and Robert Mueller’s “Caper of the Russian Ambassador” is unlikely to return proof of serious collusion let alone illegality. The president will skate ahead—dirtied and venal, no question, but his voters expected him to behave that way. He’s a vessel, not a statesman, and he’s here precisely because civil servants didn’t play the brilliantly beneficent role that Sorkin fashioned for them.

“The West Wing” did get one facet of Washington right: real business tends to take place in grungy offices and claustrophobic halls, not grand rotundas. What it got wrong was in thinking that all business takes place there, that the voters themselves aren’t major characters and that the real narrative isn’t also advanced at kitchen tables and small-town watering holes. That’s where Donald Trump’s fate will be decided, not the hearing room. So time to order up a new show, one that centers on an opioid crisis and features characters who sometimes think differently from Angela Merkel. The question is, will anyone at Union Pub watch?