Back during the legislative debate over the Affordable Care Act — an epoch ago in this harried political time — Republicans warned the health law would fail and when it did Democrats would use it as an excuse to push for single-payer or something close to it. It was a setup, they warned, a ploy to establish a waypoint on the path to European-style health coverage that would allow a more radical proposal to seem reasonable next time around.

That premonition appears to be coming true.

In fact, Democrats seem to have moved the Overton Window further than even the most cynical conservative ever imagined. Look no further than the fact that they’re now taking their cues from Bernie Sanders, the social democrat from Vermont who used to be considered our furthest-left senator, back before those political definitions got scrambled. Sanders announced legislation this week that would distribute “universal Medicare cards,” ensuring basic health care services to every American. Remarkably, more than one third of the Senate Democratic caucus is currently on board with this.

RARE POV: Hillary Clinton’s book tour: Another exercise in blaming everyone but herself

That’s a surge in support compared to Sanders’ last shot at universal coverage back in 2013, when not a single Democratic senator backed his efforts. Fast-forward to this week and the press conference announcing his bill turned into a sort of Jay Gatsby party for 2016 hopefuls. NBC News gushed over the roster: “Sen. Kirsten Gillibrand, D-N.Y., hovered inches from Sanders’ left shoulder” (she’s half genie, apparently) “while Sen. Cory Booker, D-N.J., stood directly behind him. Sens. Kamala Harris, D-Calif., and Elizabeth Warren, D-Mass., flanked Sanders, a once and potentially future presidential candidate himself.” Democratic leadership notably wasn’t in attendance — NBC News: “Chuck Schumer was standing on Sanders’ head…” — but they don’t need a weatherman to know which way the wind blows.

Policy-wise, Sanders’ bill is premised on clinical insanity. The federal government failed to make health care better last time around, so let’s give them control of the entire system. But politically it seems like a winner for Democrats, who run best on kitchen-table issues that allow for huge giveaway pledges. That should especially be true on health care, where consistency of coverage is a serious concern for Americans — and nothing promises stability like an all-powerful card that gets you waved into the oncology unit. Plus, lest we forget, Sanders’ campaign turbocharged the left-wing voter base. Hillary Clinton slammed Sanders for promising every voter a pony; now Democrats have grabbed the saddle and are riding off to Fantasyland. Makes political sense, right?

Not so fast. The oracular mists are clearing; the premonitions of doom arouse skepticism. Out of fraught Democratic backrooms has come news of internal polls, reported in Politico yesterday, suggesting the only impending doom is that of the Democrats. The internal surveys show the opposition party is in deeper trouble than their partisans admit out loud, widely distrusted by the public, unable to make their attacks on Trump stick. But we knew that already. The real revelation is that the left’s bread-and-butter issues are no longer working in its favor, including, surprisingly, universal health care.

Here’s Politico on Medicare-for-all: “The challenge is that most voters in focus groups believe it’s a pipe dream — they ask who will pay for it and suspect it will lead to a government takeover of health care — and therefore wonder whether the politicians talking to them about it are being less than forthright, too.” Even as Obamacare grows incrementally in popularity, the public remembers its failures and is reluctant to let the feds touch the health system again, whether it’s Republicans sucking insurers’ toes or Democrats chasing their single-payer chimera. The trust in government necessary for technocratic liberalism is no longer there, the consequence of wars we didn’t win, economic interventions that didn’t work, on and on for 16 years.

The Democrats’ recent accord with Donald Trump only masks the shambolic shape their party is in. Sure, their presidential hopefuls are better off with Sanders’ fiery socialism than Hillary Clinton’s musty neoliberalism-cum-solipsism. But let’s not pretend their political crisis is smaller than it is. 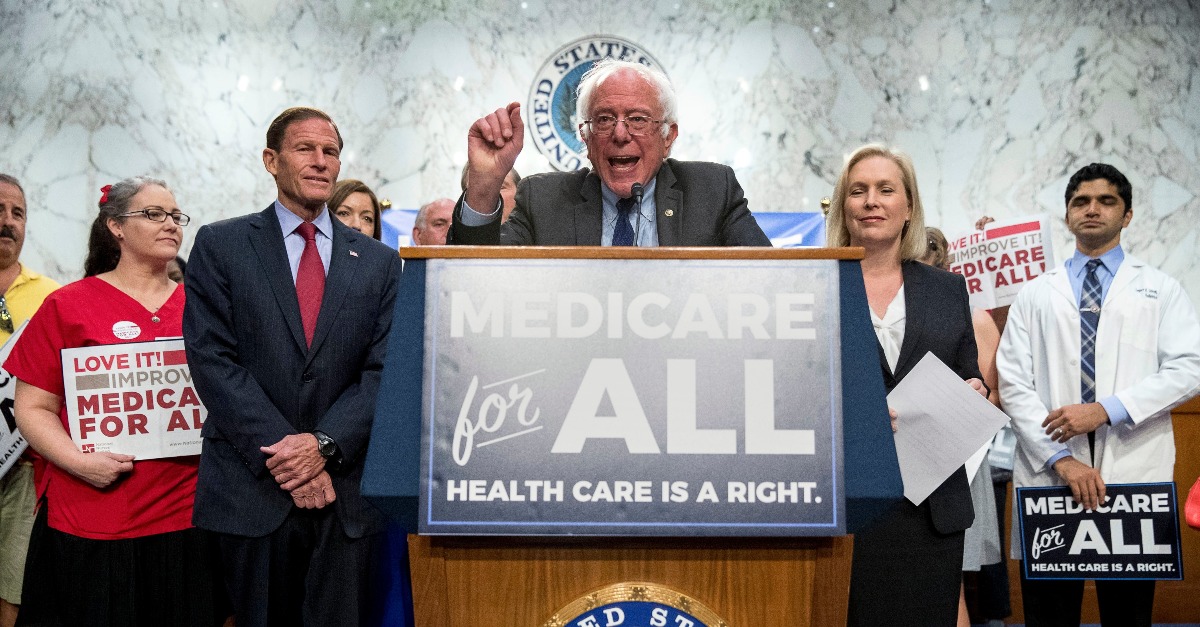