How’s Brexit going? So far, so good, but the EU is getting ready to play hardball 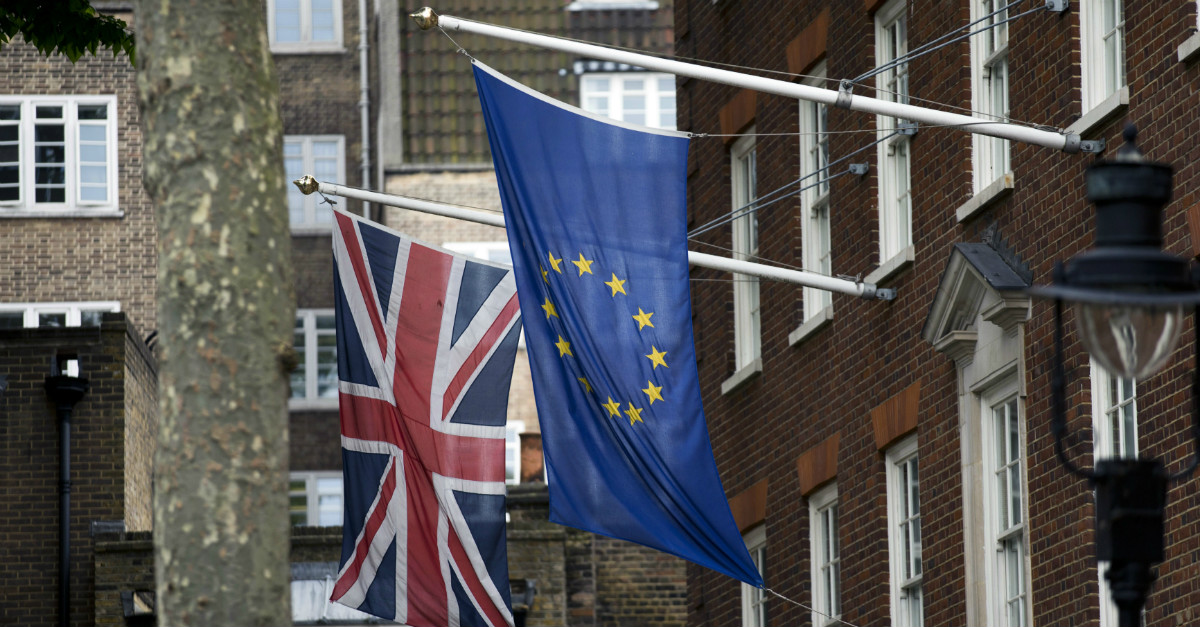 AP Photo/Matt Dunham, File
FILE - In this Wednesday, June 22, 2016, file photo, a European, right, and Union flag are displayed outside Europe House, the European Parliament's British offices, in London. One week after Britain’s vote to quit the EU sent markets into a tailspin, investors seem to be taking a more sanguine view of its eventual economic repercussions. (AP Photo/Matt Dunham, File)

Remember the prophecies of apocalypse after Great Britain voted to leave the European Union? Economic depression, plagues of locusts, and Bashar al-Assad annexing London were among the consequences predicted by many in the media. And even those who weren’t feverishly eschatological augured bleak times for the UK, as its economy wrangled with years of uncertainty.

None of that has come to pass. Stocks initially took a tumble, but the major British indices, the FTSE 100 and the FTSE 250, are well above where they were a year ago. Other economic indicators have also endured the buffeting of Brexit (the exception is the British pound, which is in a two-year slip against the dollar). Meanwhile, polls show that Scotland, despite voting to remain in the EU, has no desire to secede from the United Kingdom, as many warned it would.

So far, so good, but potholes lie ahead. To implement Brexit, the United Kingdom will have to trigger Article 50 of the Lisbon Treaty, which turns an hourglass upside-down. The British will have two years to negotiate a farewell pact with Brussels; failing that, they’ll be unceremoniously jettisoned from Europe’s free-trade zone and British business will suffer the consequences.

The biggest advantage London can claim is that it doesn’t have to begin negotiations until it activates Article 50, which Britain’s new prime minister, Theresa May, has said she won’t do until next year. This has elicited much squawking from inside the EU, where ministers want an expeditious process, but there’s little they can do: Britain has the whip hand here and May, an unflappable and competent stateswoman, has no intention of moving faster than she needs to.

RELATED: Say, has anyone noticed that Britain hasn?t sunk into the ocean?

Don’t interpret May’s caution as an attempt to stall Brexit into oblivion, though. The PM has said repeatedly that “Brexit means Brexit,” and to further hammer the point, she placed in charge of negotiations three ministers who backed the Leave campaign. London elites hopefully titter about how, *breathes*, the referendum was non-binding and, you know, Parliament could simply choose to ignore it and Britain could stay in after all! Yes!! But that would be an egregious circumvention of democratic will, and May, though she supported Remain, isn’t that stupid. Britain is coming out of the EU. The questions are when and on what terms.

The EU must descend onto a narrow landing strip here. On one hand, they’re facing a foment of nationalism across the continent that reflects public exhaustion with Brussels’ economic and immigration-related deficiencies. Marine Le Pen, head of the French National Front populist party, has said she’ll hold a referendum on France leaving the European Union if she’s elected next year?Brexit would hobble the EU; Frexit would destroy it. So Brussels can’t let Britain off too easy, lest it signal that departure can be painless. But it also can’t throttle the British, since many European nations’ exports, particularly Germany’s, are reliant on the UK.

How to proceed? Enter Jean-Claude Juncker and Guy Verhofstadt. Juncker is the president of the European Commission and an ardent federalist?different from American parlance, that means he wants a more federal EU. Verhofstadt is the EU’s chief negotiator and arguably even more of a federalist than Juncker. Brexiteer Nigel Farage has said Verhofstadt’s appointment amounts to a “declaration of war,” and it’s certainly an indication that the EU intends to play hardball. Both Juncker and Verhofstadt have insisted that the EU’s freedoms are indivisible, meaning free trade must be accompanied by free migration, something Britain cannot allow after a referendum where immigration was a major issue.

RELATED: After Brexit, Obama should start work on a free-trade deal with Britain

Offsetting the federalists is German Prime Minister Angela Merkel, who’s been more moderate on the subject of Brexit, both because she’s fed up with Juncker and because she doesn’t want to wreck her country’s economy. But this week, even Merkel closed off back channels to Britain, saying Germany wouldn’t negotiate, even informally, until Article 50 had been activated. Europeans are now singing from the same hymnal. Brexit will be a slog and London will not slip out the door easily.

But Britain also has plenty of friends willing to hold her coat, notably the United States, Australia, New Zealand, and India, all of which are keen on striking bilateral trade deals with a freshly sovereign UK. America’s special relationship with Britain is in need of repair, after the trauma of Iraq and President Obama’s mild Anglophobia. What will Brexit bring? With the EU crumbling under its own weight, perhaps it’s the transatlantic friendship that will be left standing tall.