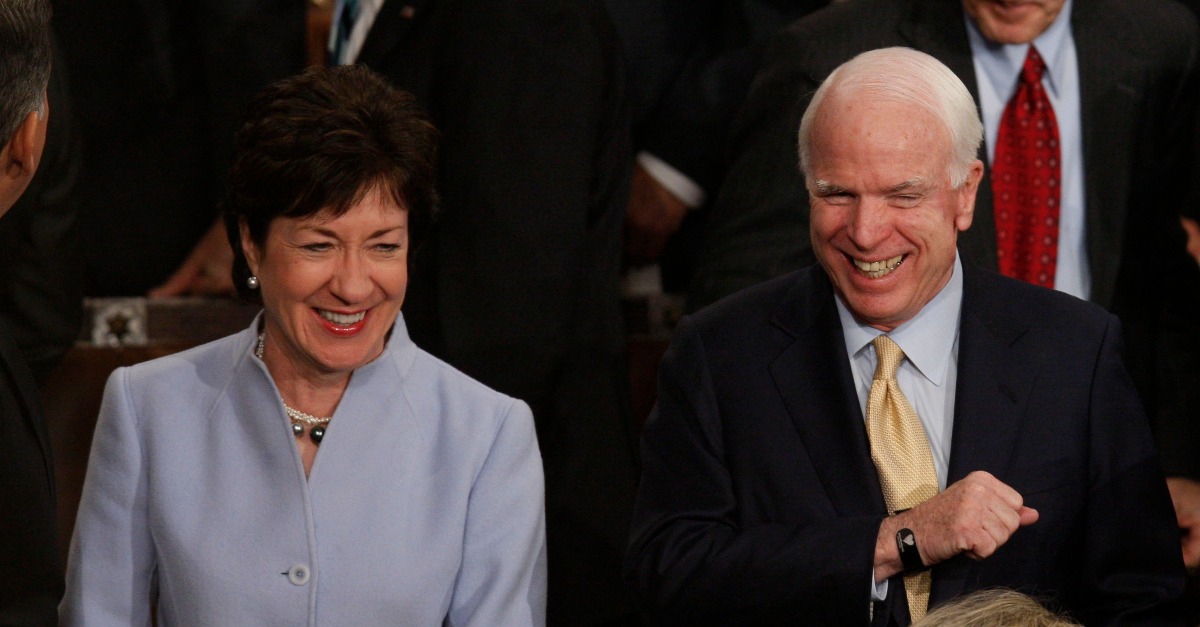 The “skinny repeal” of Obamacare is dead. Sen. John McCain joined moderate Republican Senators Lisa Murkowski and Susan Collins, along with all the Democrats, to defeat the bill 51-49.

The measure was supposed to be the narrowest possible terms that could still garner 50 Senate votes. But throughout the day Thursday, Capitol Hill sources told Rare they didn’t know what “skinny repeal” actually meant. They used the term to refer to policies as various as repealing the individual mandate, partially delaying the employer mandate, giving states more flexibility with Obamacare regulations and cutting increases in public funding found in the original Obamacare bill.

Really anything could have been on the table, including language that defunds Planned Parenthood for a year, Senate staffers explained Thursday. And there was another huge stumbling block: there was no agreement on what to cut, and to fall under the narrow rules of reconciliation, the bill would have to reduce the deficit by $115 billion.

The legislation itself was not released until nearly 10 p.m. on Thursday night. Ultimately it included a repeal of Obamacare’s individual and employer mandates, and a temporary repeal of the medical device tax. It also included state-based flexibility to opt out of some Obamacare regulations.

The man who ultimately doomed the legislation, Senator John McCain, flew back to Washington to vote for a motion to proceed on the health care bill Tuesday, only to then hold press conferences decrying the bill and complaining about the process. He cast the decisive vote burying skinny repeal at close to 2 a.m. on Friday morning.

This came after several moderate Republicans?including McCain?joined Democrats to defeat an amendment Wednesday that would have allowed two years for Congress to devise a replacement to Obamacare.

The clues that this bill was doomed to fail no matter what it contained were evident Thursday as moderate GOP senators demanded assurances that the bill would conference with the House, a bizarre and backward request that Senate Majority Leader Mitch McConnell reportedly agreed to. Some senators appeared to be asking in the hopes that the House Freedom Caucus would accept the blame for its failure.

Politico saw this as moderates’ hope that ?their own Obamacare repeal won?t become law,? and it?s hard to interpret such spinelessness any other way. These senators were saying they?d like House Minority Leader Nancy Pelosi to have a seat at the table as the bill she whipped votes for would be torn asunder. Has any legislation ever entered into conference and emerged better for the ordeal?

The opening of a Vox article is telling: ?Republican Sen. Mike Rounds (R-SD) wants a guarantee: that the Senate health bill he will likely vote to pass won?t actually become law.? What a portrait in leadership.

In order to understand the kind of tortured logic wherein a senator says he will vote for a health care bill whose language has not yet been released, based on a bill from the House, hoping that a tiny minority of House conservatives will somehow scuttle the bill, or Democratic leadership will add back in the parts you like but couldn?t publicly support, you have to have the backbone of a jellyfish.

Yet it wasn’t so long ago that the entire GOP conference was united in repealing Obamacare. As recently as December 2015, Senator Murkowski said: ?This law is not affordable for anyone in Alaska. That is why I will support the bill that repeals the ACA and wipes out its harmful impacts. I can?t watch premiums for Alaskans shoot up by 30 percent or more each year, see businesses artificially constrained, or see the quality of public education decline.?

What changed? It was easy enough to vote for repealing Obamacare ?root and branch” when the legislation would land on the desk of President Obama, who would never undo his own legacy legislation.

But now that these senators’ votes have meaning, they don’t want to stand on what they promised over and over again. For shame.