No, Donald Trump was never a conventional Republican. And it’s a bit late to be crying about it. 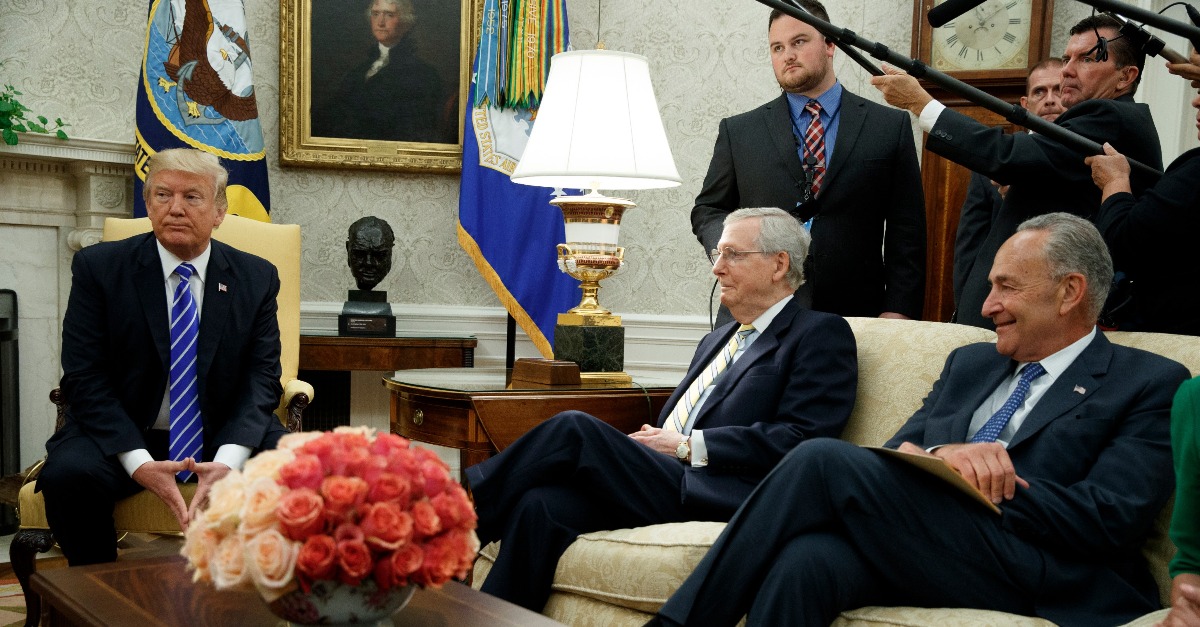 When Senate Minority Leader Chuck Schumer and House Minority Leader Nancy Pelosi stopped by the Oval Office yesterday to meet with President Trump and their Republican counterparts, they probably thought the meeting would last for an hour at most and break up with no discernible progress.

What they got instead was everything they were asking for in the upcoming budget battle: a three-month debt limit increase, a three-month bill to keep the lights on in Washington and a rhetorical commitment from Trump that a legislative fix for the Dreamers should be a top priority. House Speaker Paul Ryan and Senate Majority Leader Mitch McConnell were left flabbergasted. As Axios?s Jonathan Swan reported, ?Sources inside and close to [GOP] leadership have used the full range of expletives in text messages reacting to what Trump did this morning.?

Paul Ryan went back to his office aware that Trump had just chosen the Democratic proposal over that of his own party — the same proposal the Speaker had publicly blasted earlier that day. McConnell looked like the bride left at the altar, forced to dry his tears and choke out a few words. ?The president can speak for himself,? as McConnell said, is not exactly a ringing expression of Republican Party bonhomie.

Congressional Republicans have a right to be upset. The Atlantic?s description of the Democratic win as an ?early Christmas gift? isn’t even the half of it. It?s more like ?the gift that keeps on giving,? because by agreeing to a three-month extension for the debt ceiling and a government spending package, Trump gave Schumer and Pelosi even more leverage during the next round of fiscal talks in mid-December. The more votes on government spending and the debt ceiling that a GOP Congress has to take, the more of an opportunity Democrats have to play hardball on priorities like immigration reform and non-defense spending.

If Ronald Reagan or any member of the Bush family were in charge, Republicans in Congress wouldn’t have to worry about being sold out in the spur of the moment. Party loyalty and cohesiveness as an essential component of Republicanism is how a slew of GOP priorities like tax reform, tax cuts and defense spending were successfully pushed through Congress during their presidencies.

Trump, though, isn’t a conventional Republican politician. In fact, he isn’t a Republican, period. He?s a modern-day populist who isn’t beholden to any ideology whatsoever. His ideology is Trump; he does what he wants to do in the moment and he doesn’t really care if the two top Republicans in Congress are upset about it. He fights just as often with Mitch McConnell, John McCain, Jeff Flake, Ben Sasse, and Lindsey Graham as he does with Schumer, Pelosi, Richard Blumenthal, and Elizabeth Warren. To Trump, all of these people are career politicians, members of the swamp he still wants to drain. The famous Reagan commandment ?Thou shalt not speak ill of another Republican? means nothing to Trump.

No one is saying that congressional Republicans shouldn’t be pissed off about what happened yesterday. But should they really be surprised, given Trump?s non-ideological political history and his tense relationship with GOP leadership?

If Republicans wanted a president who followed the GOP script, they should have nominated Jeb Bush or Marco Rubio in 2016. It?s a little late to be crying about it now.