The death of Muhammad Ali elicited much praise for the sports and cultural icon, but it also resurrected an old charge: That Muhammad Ali was a draft dodger.

On social media and at some conservative outlets, Ali was attacked for his opposition to the Vietnam War and refusing to fight.

But Ali didn’t “dodge” anything. As Rare’s Tom Mullen explains, “Ali never dodged the draft; he opposed it, accepting the legal consequences without any attempt to evade them.” “He didn’t flee to Canada or enroll in college to obtain a deferment,” Mullen noted. “From the moment he learned of his induction, Ali stood firmly in the proud tradition of civil disobedience, saying ‘just take me to jail.”

Ali even showed up for his draft selection to make an explicit statement that he would not be taking part in it. “On April 28, 1967, Ali reported to the Military Entrance Processing Station in Houston,” Bustle’s Abby Johnston notes. “As officials called his name for induction to the Army to fight in the Vietnam War, he wouldn’t step forward.”

That’s not running away. It was saying, ‘Here I am, I’m not fighting in your war, now do with me what you will.’

Ali faced the music and accepted the consequences of his actions.

But are there others who could more accurately be accused of “dodging” the draft?

A 1967 Associated Press story reported on President Lyndon Johnson’s attempts to “stop draft dodging” described this as any methods by which young men used to avoid service, from attending university to seeking deferments.

Neither of which Ali did or attempted to do.

Donald Trump never served and has avoided questions about it. Dick Cheney, who helped bring us the Iraq War, got five deferments during Vietnam. George W. Bush’s service record is a bit shady (a former Texas politician claimed he helped Dubya avoid going to Vietnam at the request of his family). Mitt Romney used his Mormon faith to stay out of Vietnam (Ali cited his Muslim faith).

These are just a few Republican politicians.

Rush Limbaugh qualified to serve in Vietnam but stayed out because he had a cyst on his butt. Chronic war supporter (any war, really) Bill Kristol most likely used a student deferment. Here’s a fun one: John Wayne—Vietnam War supporter—dodged the draft during World War II so he could sleep with actress Marlene Dietrich.

One of the craziest draft dodger stories is that of rocker Ted Nugent. Here it is as described by Twisted Sister singer Dee Snider:

Ted’s always been a gun-toting conservative. But what gets me is that he was actually a draft dodger! I mean, to the point where he didn’t bathe for a week, and vomited on himself to deliberately avoid the draft. I totally understand why he did that, but all of these Republicans who love Ted don’t seem to know or remember that too well. It’s crazy that he’s become one of the voices of Conservative America even though he was a draft dodger. If you don’t believe me, Google it.

I did Google it. Yikes.

In fact, if you Google the names of Trump, Cheney, Bush, Romney, Limbaugh, Wayne or Nugent along with “draft dodger,” you will find people defending them, arguing that each man’s lack of service was somehow not actually draft dodging. They attempt to defend their honor, presumably because they believe these are honorable men.

So why not afford the same courtesy to Muhammad Ali?

During the 1992 election, I remember my father being bewildered by criticisms of Bill Clinton as a draft dodger (he was). My dad was not a Clinton supporter, but simply noted that most guys he knew during the Vietnam era, particularly in the later years of the war, were trying to find any way they could to get out of the draft.

Who could blame them?

This is no slight against the thousands of brave soldiers who fought and died for their country. But it is recognition that a war most Americans today think was a mistake, was also viewed as such by so many young men of that era—and especially those who were being forced by their government to go fight in it.

Can we really judge anyone who tried to avoid that?

So why so much ire toward Ali? One of the few famous men who faced the authorities head-on during that era and paid a price for that defiance?

Muhammad Ali was no draft dodger. But his critics seem to be dodging the true reasons behind their venom toward him. 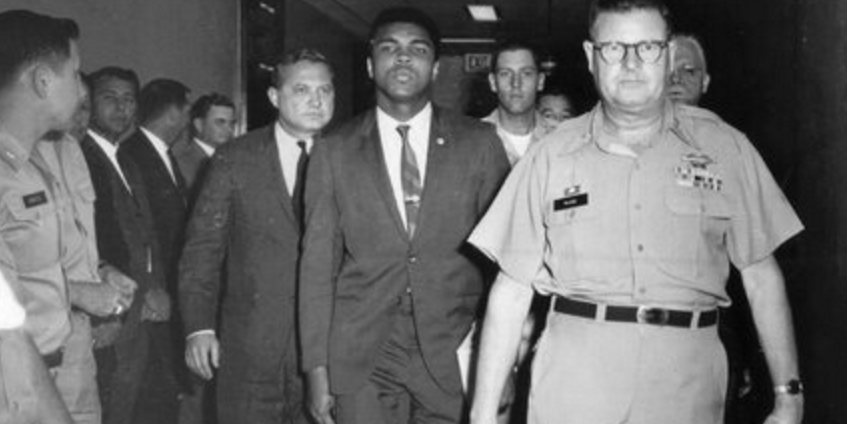