Private sector vs. government: Why is Matt Lauer out but John Conyers still there? 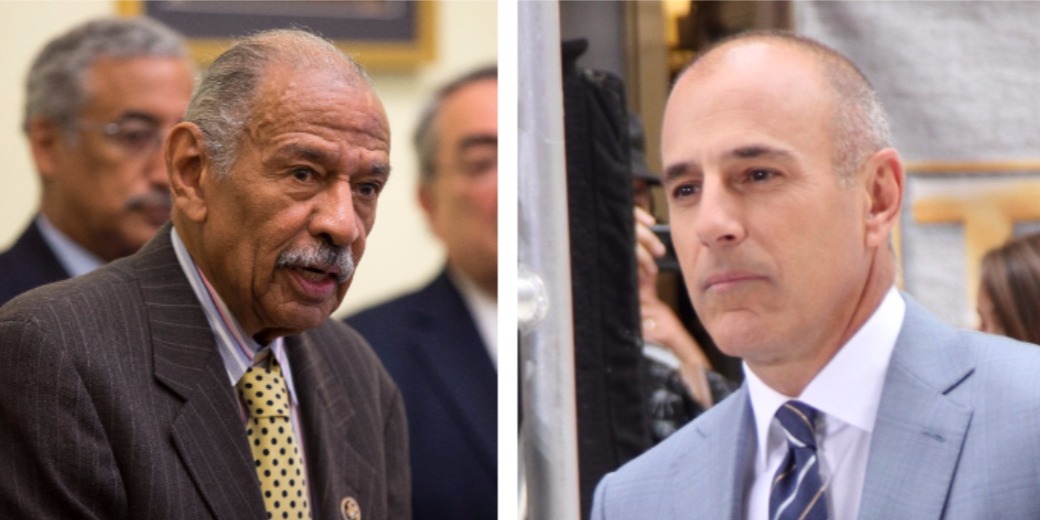 On Wednesday, NBC announced it had fired TODAY host Matt Lauer due to sexual harassment allegations. Many Americans, including most of Lauer’s NBC colleagues, were shocked by this news. As the day unfolds, allegations against Lauer continue to mount.

For well over a week now, multiple sexual harassment allegations have been made against Rep. John Conyers (D-Mich.). Like Lauer, the accusations against Conyers continue to multiply.

But unlike Lauer, Conyers remains in his job. He stepped down from his post on the House Judiciary Committee, but as of this writing, he’s still refusing to resign his seat. Democratic House Minority Leader Nancy Pelosi all but defended Conyers last weekend.

Not all of these sexual harassment and allegation charges against high profile people that seemed to have exploded in the wake of the Harvey Weinstein scandal are the same in type or degree. But there does seem to be consistently different patterns for politicians who have been accused as opposed to those who work in the private sector: Government officials generally get to keep their jobs, and private sector celebrities generally do not.

In the last few weeks, we have watched not only Lauer, but television host Charlie Rose, actor Kevin Spacey, comedian Louis CK, journalist Mark Halperin (I know I’m going to miss a few) lose their jobs or deals in some sudden fashion due to charges of sexual misconduct. But politicians like John Conyers? Politician Al Franken? Politician Roy Moore? Not to mention current and former presidents Donald Trump and Bill Clinton –  each has been immune to the same sort of punishment their private sector counterparts could not avoid.

Because the private sector exists to make profit and employers are not going to risk losing advertisers, ticket sales, subscriptions or customer dollars in whatever form they might come because there is a stench on their product. The free market dictates that these men who have been accused must go.

Government works much differently, where accountability is up to voters in theory, but more realistically, once politicians are ensconced in Washington they have far more privileges and protections than most private citizens could ever hope to enjoy.

The state doesn’t have to answer to the people in the same way the free market does. Government can slumber on even if it’s doing a bad job.

Even in the case of Roy Moore, it’s harder to imagine him still being a candidate for the gig he seeks if he was running to replace Matt Lauer than to hold a seat in the U.S. Senate. Moore’s not even in Washington yet and the rules are simply different for many politicians.

Please don’t misunderstand: The same private sector that now swiftly dismisses those accused of sexual assault also created an environment that allowed many men to be predators for far too long, doing irreparable damage to many innocent people.

But now that environment has appeared to change, post-Weinstein. More women feel more comfortable coming forward. It’s becoming clearer, hopefully, that even the most powerful men will no longer be allowed to get away with such behavior.

And it has been the private sector that has reacted the fastest to these new market demands.

Free market dynamics don’t apply to politicians. Lauer is accused by multiple women and is paying a price. President Trump has been accused by 13 women. To date, this has not affected his office significantly and there’s a good chance it never will. The same was true of Bill Clinton, who some now suggest would not be able to remain president in the current environment, but comments like those made by Pelosi about Conyers make you wonder if that’s even true. Some Democrats are still divided on whether or not Conyers should go.

If John Conyers worked for NBC, we wouldn’t even be having this discussion.

There are many reasons conservatives and libertarians distrust government and prefer free markets. Add this one to the list.