Rep. Justin Amash said Wednesday that impeaching President Trump could be a possibility if a memo written by recently fired FBI Director James Comey turns out to be true. That memo reportedly indicates that the president asked Comey to end the FBI’s investigation of former Trump cabinet member Michael Flynn.

Amash tells reporters that if Comey memo allegations are true, it's grounds for impeachment. Says he trusts Comey more than Trump.

To be absolutely clear — something that has become increasingly difficult for partisans on all sides since Trump took office — Amash is not calling for impeachment. He is simply saying that if these allegations are true, such abuse of power is an impeachable offense.

But no one should be surprised Amash would be the first Republican to raise this as a possibility. For starters, he is one of the only two Republicans to co-sponsor a Democratic bill that calls for an independent investigation into any involvement by Russia in the 2016 election. The other Republican sponsor is Walter Jones, a frequent Amash ally who was also one of the closest allies of former Congressman Ron Paul, the libertarian icon Amash has been compared to on occasion since entering Congress.

Which brings us to the most significant reason the Michigan congressman wouldn’t hesitate to stand up to the president if guilty of wrongdoing, even if the Commander-in-Chief is a Republican: Amash is a libertarian Republican.

The more important fight will take place on Capitol Hill. With the vast majority of Republicans already capitulating to Trump, libertarian-minded lawmakers are positioned as the most vocal bloc of intraparty opposition. Ron Paul was a lonely voice of dissent in Bush’s GOP, and benefited politically when the party faithful eventually came around to some of his arguments.

Today, there’s a much larger contingent in the Congress oriented toward libertarianism—Amash, Sanford, Thomas Massie of Kentucky and others in the House; Rand Paul and Mike Lee in the Senate—and it has already shown a willingness to tangle with Trump where others in the party have passed. The aggressiveness with which libertarians check Trump’s overreach, at home and abroad, will correlate with the movement’s credibility, and popularity, if Republican voters turn against the president’s policies.

To date, every libertarian-leaning Republican Politico cited — obviously Amash, but also Reps. Mark Sanford and Thomas Massie, Sens. Rand Paul and Mike Lee — have opposed Trump on various issues and to varying degrees. Whereas John McCain and other Republicans have challenged Trump, national security hawks are coming from a different place than libertarians who prioritize enforcing the Constitution and equal application of the law.

Libertarian Republicans also don’t always agree. Rand Paul and Thomas Massie have regularly dismissed alleged Trump-Russia ties or cooperation as Democrat paranoia (though have not directly addressed the Comey memo), whereas Amash and the liberty-friendly Jones insisted on an investigation.

Still, no one should be surprised that the first Republican to use the “i” word as a possibility for Trump is a liberty Republican who continues to be one of the most independent leaders in Washington. 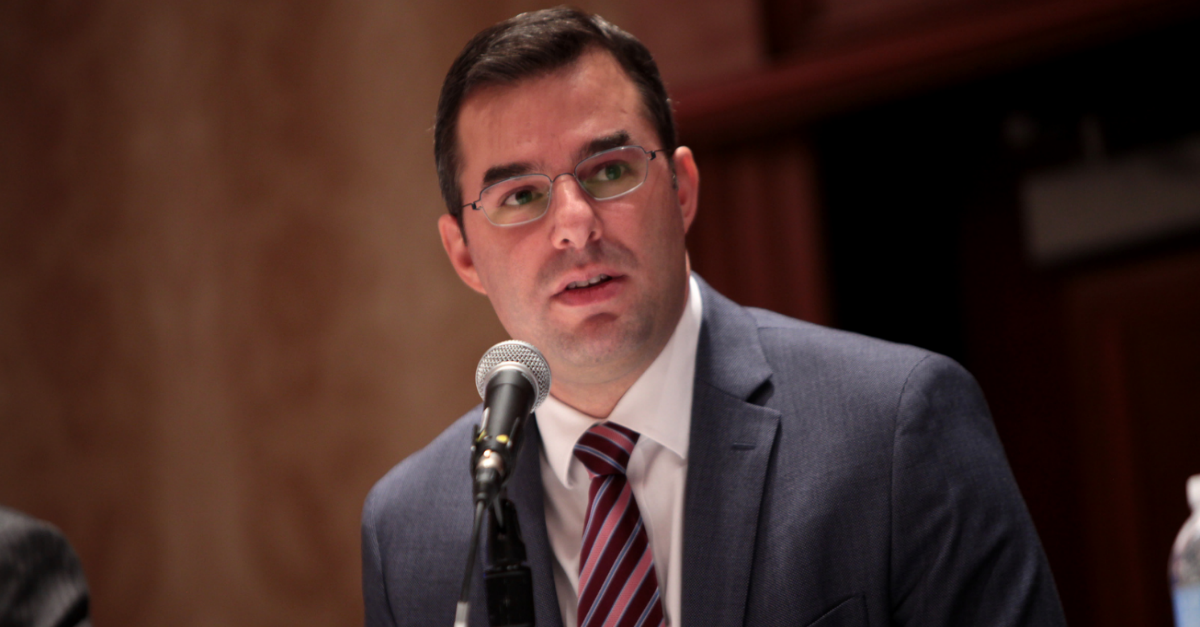