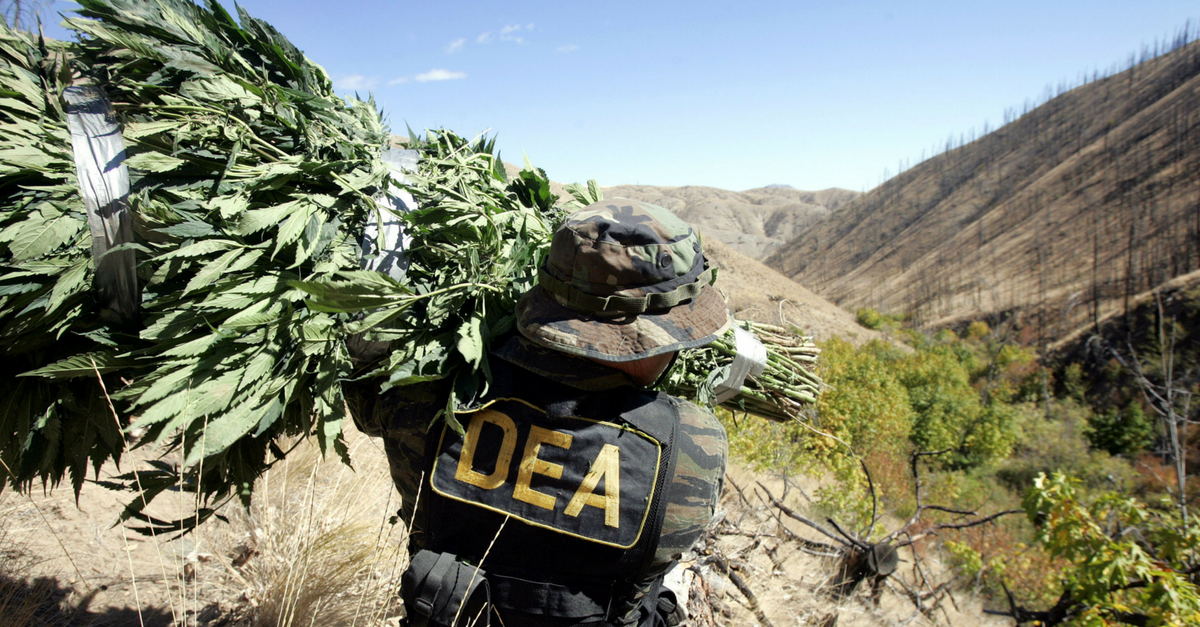 AP Photo/Elaine Thompson
** ADVANCE FOR WEEKEND OCT. 1-2 ** A Drug Enforcement Administration agent shoulders a bundle of marijuana plants down a steep slope after working with other law enforcement officers to clear a patch of the plant from national forest land near Entiant, Wash., Sept. 20, 2005. Police confiscated 465 marijuana plants at the so-called "garden," a small find compared to the thousands of other plants confiscated on some other busts in the area. The illegal marijuana growing operations are wreaking havoc on counties with huge tracts of open space and few resources to tackle them. (AP Photo/Elaine Thompson)

Last month, the Drug Enforcement Administration quietly updated the Federal Register to include a new drug code for “marihuana extracts” under the Controlled Substances Act. The DEA asserts that the move was meant to better track these materials and to comply with international treaties, saying:

At first glance, this seems to be a purely clerical change. However, a problem lies within the DEA’s definition of a marijuana extract, which they say is “an extract containing one or more cannabinoids that has been derived from any plant of the genus Cannabis, other than the separated resin (whether crude or purified) obtained from the plant.”

The issue here is that only the cannabis plant itself had been previously scheduled as a controlled substance, not its stems or stocks, and that “any plant of the genus Cannabis” could include hemp ? which was determined to be distinct from marijuana in the 2014 Farm Bill ? and its products. In fact, the Controlled Substances Act clearly states that marijuana does not include “the mature stalks of such plant, fiber produced from such stalks, oil or cake made from the seeds of such plant, any other compound, manufacture, salt, derivative, mixture, or preparation of such mature stalks (except the resin extracted therefrom), fiber, oil, or cake, or the sterilized seed of such plant which is incapable of germination.”

So, in defining a marijuana extract as any cannabinoid derived from any part of the plant, the DEA is ignoring the fact that certain parts of the plant weren’t previously scheduled. It’s also problematic because CBD oil, which is commonly used for medicinal purposes and does not contain THC (the psychoactive element of marijuana), and hemp were not specifically mentioned in the Controlled Substances Act beforehand.

However, it seems the new drug code has now made these extracts Schedule I controlled substances.

“This would be the equivalent of making lemons a Schedule I controlled substance and then later suddenly saying that all extracts made from the leaves of lemon trees are bound to the laws surrounding lemons, even though only the lemon fruit itself is a scheduled substance,” Zack Ruskin of SF Weekly analogizes.

The DEA, however, claims that it is merely amending preexisting rules to separate one substance into two categories for “more appropriate accounting,” with spokesman Russ Baer saying, ?The FRN published earlier this week did not have anything to do with re-scheduling CBD or anything at all to do with hemp.?

This is a misleading interpretation of the law at best because not all marijuana extracts originally belonged to Schedule 1 or any Schedule for that matter. At worst, it’s an unlawful expansion of the definition of marijuana because the administrative update arguably created new law, something that the agency has no authority to do. Because a scheduling action didn’t technically occur, the DEA maintains that the new code changes nothing in regard to what was or wasn’t already a controlled substance. However, even if this is the case, it’s still troubling for two reasons: it creates confusion, and it opens the door for harsher marijuana regulations under a soon-to-be attorney general who is very anti-marijuana reform.

“Substances that have not been properly scheduled should not be on the list as this can create confusion in the marketplace and also result in other federal agencies improperly treating legal substances as controlled,” the Hemp Industries Association said in a statement. In other words, it’s now unclear to CBD and hemp producers whether or not their products are illegal, and it’s an invitation to the national government to treat them as such, even if that was not the DEA’s intention.

With the growing legalization of recreational and medical marijuana in states across the country, the expansion to include all marijuana extracts under Schedule I is worrisome because it gives the federal government more control. Although the DEA has scaled back on targeting producers and consumers of marijuana products who are in compliance with their state’s laws during the Obama administration, there is nothing stopping them from ramping those efforts back up under a President Trump.

Attorney Michael Cindrich told Forbes, ?I think the DEA is testing how this president’s administration will respond to the marijuana issue. A push by the DEA to both regulate this and other related products is testing the waters as to the level of control.?

While it may not happen, the marijuana industry’s concern that progress could soon be reversed is valid, given that Trump’s attorney general pick Jeff Sessions opposes efforts to reform marijuana policy, even once saying that “good people don’t smoke marijuana.” Sessions has also said that we “need grown-ups in charge in Washington to say marijuana is not the kind of thing that ought to be legalized, it ought not to be minimized, that it?s in fact a very real danger.?

If confirmed by the Senate, Sessions will have the authority to roll back decades of marijuana progress and to challenge medical and recreational marijuana laws in states that have approved legalizing the plant for those uses. After the DEA’s action, he could even do the same in regard to marijuana extracts when he previously would not have had that power. So, while consumers and producers of marijuana extracts may be able to continue business as usual for now, they will certainly be on edge over the next four years.