If Trump were serious about improving policing and safety, he’d stop militarizing the police 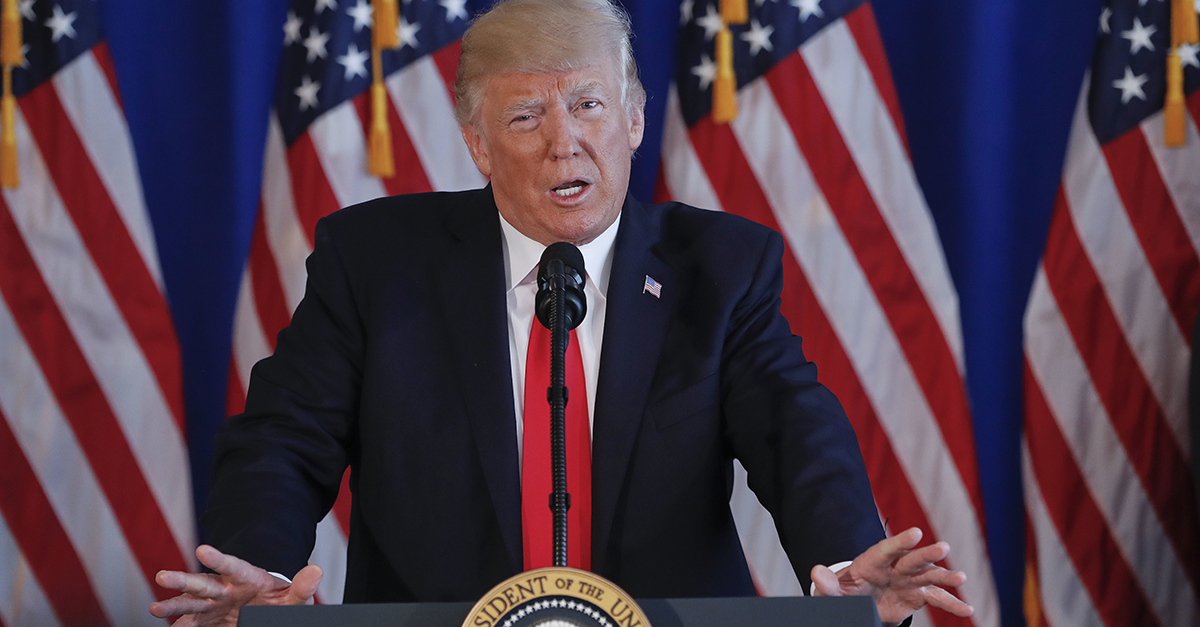 President Trump on Friday spoke at an FBI graduation ceremony for police officers from around the country who completed an 11-week training. While much coverage of the president’s speech focused on the contrast between his enthusiasm for the FBI on stage on the one hand, and his administration’s attacks on the agency on the other, that wasn’t the only noteworthy aspect of the talk.

As both Reason and The New York Times noticed, in the middle of his speech, Trump falsely claimed the Obama administration deprived local law enforcement of access to military gear.

“We are allowing our local police to access surplus military equipment, something the previous administration for some reason refused to do,” he said. “Explain that one. Explain it to me, please. Never understood that one. Somebody out there can explain ? anybody want to stand up and explain it, that’d be tough.”

The relevant comments begin around the 8:30 mark if you care to watch them:

This comment is a textbook example of why I recommend reading Trump’s speeches instead of watching them: When you watch Trump say these lines, his questioning body language and befuddled facial expressions draw you in to share his curiosity. Why wouldn’t Obama give police good gear?

Reading Trump’s words, however, it’s a lot easier to realize all the assumptions informing his question are false. His entire statement is built on lies.

The truth is the Obama administration did not refuse to give surplus military equipment to local law enforcement. On the contrary, the Obama years oversaw a massive transfer of battlefield gear to cops for use in American streets, against the American public.

Yes, in May of 2015, three-quarters of the way through his presidency, then-President Obama announced the Pentagon would no longer be allowed to distribute some types of military gear to local police. However, as Rare?s Casey Given documented at the time, the announcement was more show than substance: Many of the items Obama banned weren?t being given to police anyway, and a whole lot of military equipment was still made available.

Obama prohibited ?the handover of some equipment, including weaponized aircraft, bayonets, grenade launchers and armored vehicles that run on tracks,? the Los Angeles Times reported, but added, ?Grenades and bayonets, on Obama?s banned list, are not in widespread use by police, analysts say, and armored vehicles with tires are more common in police departments than tanks with tracks.?

In other words, for six of the eight years Obama was president, he did not institute any new restrictions on what kind of war weapons the Pentagon could give to cops. And when he did introduce restrictions, they did very little to change the militarization of police and its destructive?even deadly?consequences for the American people.

What makes this all so frustrating?beyond the standard frustration that comes with the president telling blatant, easily disproved falsehoods in service to his own personal glory and agenda?is that militarizing police doesn’t make anything better. The public or police officers aren’t made any safer.

On the contrary, it encourages police escalation and misconduct. It suggests violent solutions to problems that could be solved nonviolently. It fosters a separation between cops and their neighbors, casting the public as an enemy to be controlled instead of a community to be served.

A few weeks ago, I shared the story of Colorado man whose home was totally destroyed by cops trying to catch a shoplifter who broke in and holed up inside. The police spent 18 hours systematically blowing up every single room of this guy’s home, something they could do because they were equipped with ?40 mm rounds, tear gas, flashbang grenades, two armored Bearcats [a type of armored vehicle] and breaching rams,? plus ?68 cold chemical munitions and four hot gas munitions.?

The standoff didn’t end until a small team of police went inside the home and captured the shoplifter in half an hour. All the explosives didn’t help a bit.

It’s understandable that police would want big, powerful weapons if the Pentagon is offering them. But wanting is not the same as needing, and the feds are notorious for handing out military gear without any meaningful assessment of whether it’s good or necessary for a given police force.

If Trump were serious about improving policing and safety in America, he’d be criticizing Obama’s reforms for not going far enough.