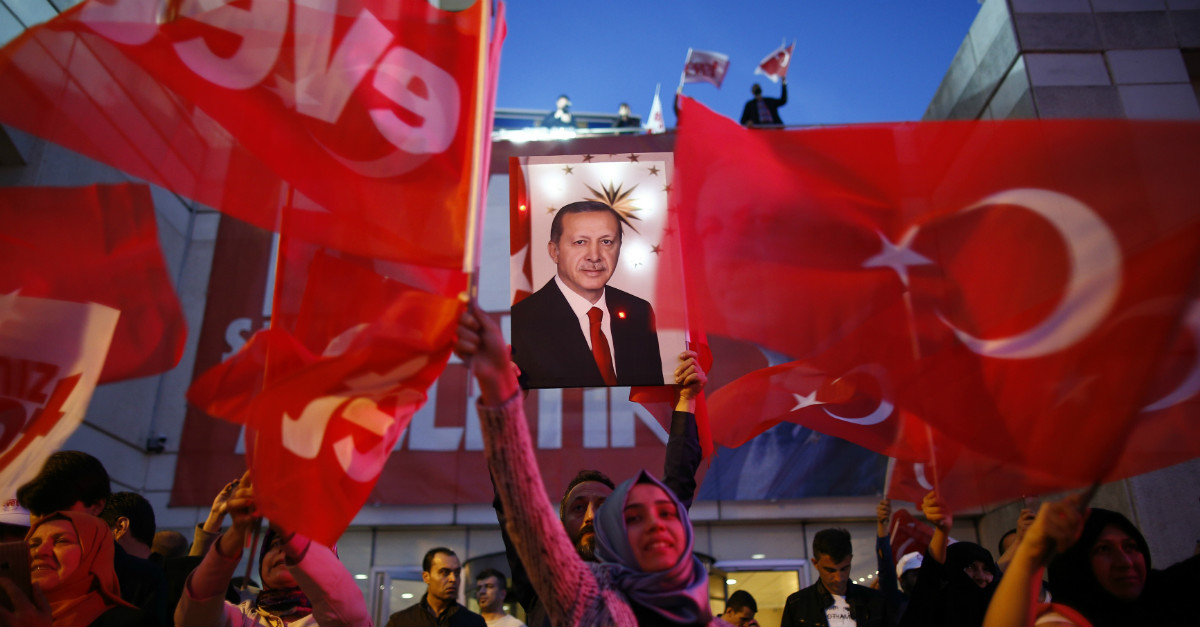 AP Photo/Emrah Gurel
Supporters of Justice and Development party (AK) wave Turkish flags and hold a poster of Turkish President Recep Tayyip Erdogan outside its offices in Istanbul, Sunday, April 16, 2017. Voting has ended in Turkey's historic referendum on whether to approve constitutional changes that would greatly expand the powers of Erdogan and the result will determine Turkey's long-term political future and will likely have lasting effects on its relations with the European Union and the world. (AP Photo/Emrah Gurel)

This weekend, Turkey voted itself into authoritarian rule. In a referendum, the country opted to weaken the powers of its parliament and vastly expand the authority of its president, Recep Tayyip Erdogan. Erdogan, who since a coup last summer has thrown thousands of Turks into prison and sacked tens of thousands from their jobs, will now have at his command an imperial executive.

The referendum, which is being denounced by international election monitors as a sham, saw 51 percent of Turks vote to enhance Erdogan’s power. Rural Turks from the country’s central Anatolian heartland were more likely to support the reforms than urban Turks in cities like Istanbul and Ankara.

Frida Ghitis writes at CNN that the referendum could be the end of Turkish democracy:

New elections will be held in 2019, at which time the prime minister’s position will be abolished. By then, the President will be able to appoint 12 out of the top court’s 15 judges, select the members of the National Security Council and play a prominent role in drafting legislation. Critics say Erdogan will, in effect, become a dictator.

Erdogan never quite left the helm of AKP even as he transitioned into the presidency, and when he faced down an attempted overthrow last July, he used the opportunity to purge the country of anyone who might stand in the way of his political ambitions. …

What lies ahead for the divided Turkish people is a much more intense Erdogan era. The President will now be empowered to move forward with his plan to erode secularism and consolidate his own power. For those who want Turkey to continue on the path of a democracy, with rule of law, independent judges, free expression and equality for all, the road ahead just became much, much steeper.

It is unclear what if any ramifications this referendum will have on Turkish membership in NATO. Erdogan has long been viewed as at the vanguard of a new crop of authoritarian leaders that threatens liberalism. This referendum will only cement that impression.

The question to be asked is why. Why did Turkey, a relatively modern country with European aspirations, vote itself into dictatorship? The reason is that liberty is a very fragile thing. As former president Ronald Reagan once said, ?Freedom is never more than one generation away from extinction.? In the case of Turkey, it took little more than a decade for freedom to be lost under the determined and conniving Erdogan.

RELATED: Turkey?s authoritarian leader is a fan of America?s death penalty, so why do we have it?

We often forget in the United States how delicate freedom really is. Liberal democracy with full franchise for all is a relatively new phenomenon in history. For example, African-Americans have only had their full civil rights for slightly more than 50 years.

The norm in the world is dictatorship or some other kind of unrepresentative, unfree rule. It is the natural course of human history for powerful men to impose their wills upon others.

Erdogan promised stability in exchange for his countrymen?s freedom. Turkish voters decided that was a good bargain. It?s a choice that has ramifications for every free country in the world.