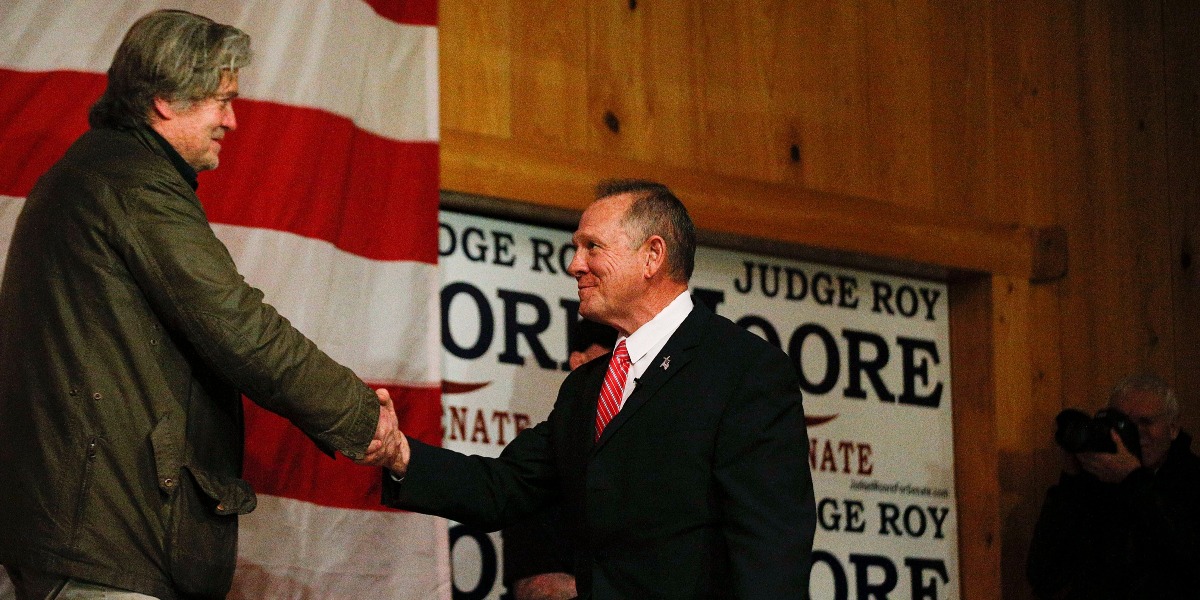 For Breitbart Chairman and former Trump chief strategist Steve Bannon, politics is a form of war. There can be no mercy on the enemy, no sense of guilt in the trenches, and no hesitancy in pulling the trigger. All that matters is conquering your opponent using all of the political weapons at your disposal?even someone like Roy Moore, a man alleged by multiple women to be a sexual deviant and a predator.

Bannon, of course, doesn?t believe the allegations anyway. They are all part of an orchestrated campaign by the establishment media, in cahoots with Senate Majority Leader Mitch McConnell, 2012 Republican presidential nominee Mitt Romney, Sen. Jeff Flake… anyone in Washington who doesn?t agree wholeheartedly with the economic populism and nationalist agenda Bannon is working so vociferously to promote.

Roy Moore is an outsider in deep red Alabama and the definition of a social instigator, the kind of candidate Bannon can sink his teeth into. He worked on behalf of Moore during the primary campaign against the establishment-picked Luther Strange and helped him win by nearly ten points. And sexual misconduct?including assaults on teenagers?be damned, Bannon is boosting Moore again.

Given the numerous women who have come forward to tell their stories of being abused and harassed by an early 30s Roy Moore while they were teenagers, defending the former Alabama Chief Justice in public takes a lot of balls.

While the allegations against Moore have yet to be proven in a court of law (has the statute of limitations expired?), it?s hard to make a case that all these women are lying. Moore?s denials would be believable if he had the backbone to answer questions from reporters and the courage to debate Democratic candidate Doug Jones in public, but he doesn?t.

Instead, he taps Bannon to do the dirty work for him. And Bannon is more than happy to take the assignment?calling Romney a draft dodger (?you hid behind your religion. You went to France to be a missionary while guys were dying in rice paddies in Vietnam.?) and Flake a pathetic, limping worm with shallow pockets in the process.

And the Republican Party apparatus has been a complete, shameless embarrassment during this entire campaign. When sexual assault claims were first made against Moore, they were serious enough for the Republican National Committee (RNC) and the Republican Senatorial Campaign Committee (RSCC) to cut all financial ties. Sen. Mitch McConnell was actively exploring a write-in candidate, and Sen. Cory Gardner (the head of the RSCC) strongly expressed his view that Moore should be expelled from the Senate if he won his race.

Now, because Moore?s poll numbers have risen to the level where he could very well win the seat, the RNC has backtracked and decided to pour money into Moore?s get-out-the-vote effort. McConnell is now left mumbling to himself that there is nothing that can be done.

There is a way, however, for the GOP to recoup the decency it has lost throughout this campaign. Assuming Moore wins the race, it could immediately forward his case to the Senate Ethics Committee, investigate the allegations, and?if there is any truth to them?work to acquire the 67 votes necessary to kick him out of the chamber.

Egregious conduct, even if it happened decades ago, shouldn?t be excused or swept under the rug just because you have an ?R? next to your name.