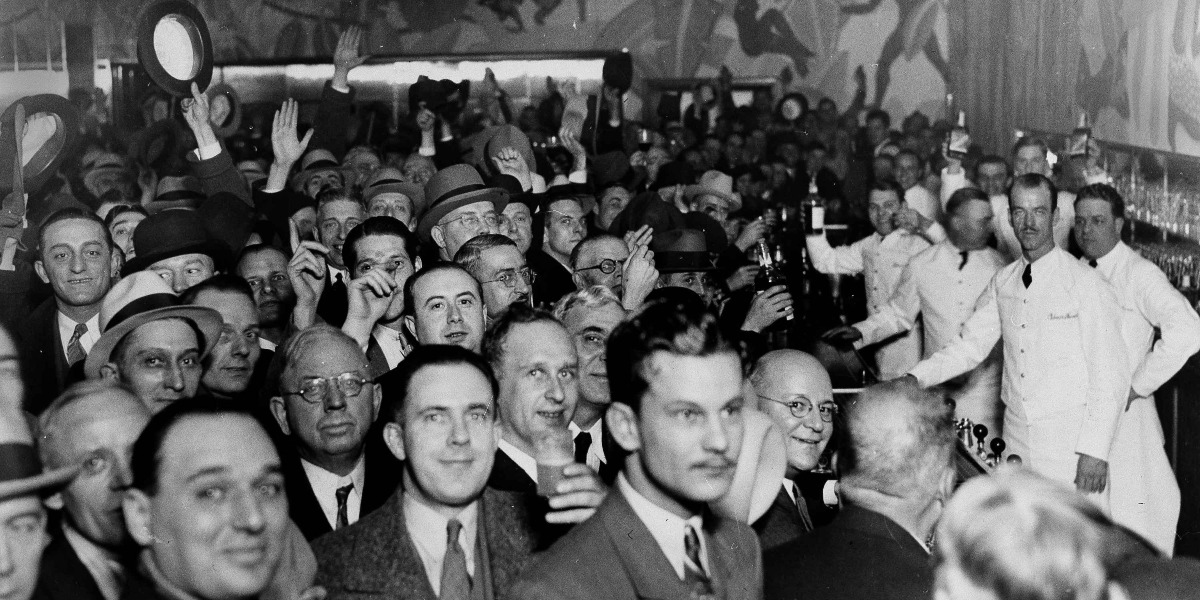 AP Photo
Crowds jam a downtown Chicago bar as word came from Utah that prohibition has been repealed, Dec. 12, 1933. Before the scramble for a legal drink, the crowd tossed a few hats in the air and let loose a round of cheers. (AP Photo)

This week marks the 84th anniversary of the repeal of alcohol prohibition in the United States through the passage of the 21st Amendment. Free marketeers frequently concern themselves with major policy wars in which the individual too often loses to the Leviathan state—for example, health care, the drug war, spending, and debt. However, individual battles in everyday life are often overlooked—sin taxes and other nanny state regulations affect how we live in a very real and visible manner. During this time of celebrating our freedom to choose (and booze), we should be conscious of the many ongoing nanny state battles.

Governments still try to control the consumption of alcohol around the world today. The monopoly the government has on alcohol in Sweden is the reason illegal smuggling accounts for five percent of total sales, and one-fifth of alcohol consumed is from other countries. And in perhaps the most overreaching nanny state in the world down under, restrictions on mixed drinks have led to heightened consumption of hard liquor by Australia’s youth. Not only are these policies a gross violation of freedom, they’re also ineffective. Australia has the same amount of teens in hospital beds, and Sweden’s alcohol dependency still exceeds the European average.

The tobacco industry has been a target for decades. London has the world’s most expensive cigarettes at $14.30, followed by New York City, where Mayor Bill de Blasio has passed a bill making $13 the minimum price a pack can sell for. Many nations in Europe take it to the next level and require industries to use standardized packaging. The European Union forbids packs with less than 20 cigarettes from being sold. In the UK, this new rule fueled the black market as an increased amount of cigarettes are bought from illicit sources, abroad, and illegally online.

No wonder ol’ Britain wants to leave the EU! Judging by the skepticism other Europeans have towards Brussels, the UK may not be the last country to stick it to their bureaucratic overlords. A recent Financial Times survey found that 83 percent of their readers believe the EU would not keep an open mind and make decisions based on independent evidence.

The nanny train doesn’t stop at smokes, either. Next stop: sugar! In recent years, governments across the globe have been taxing sugary drinks like soda in a supposed attempt to curb obesity. Fortunately, the tide might be turning. When Chicago tried to implement a similar policy, mass confusion ensued, and the policy ended within a few weeks.  When former Mayor Michael Bloomberg tried to ban large sugary beverages in New York City, citizens across America rose up and defended their freedom to buy a Coke larger than 16oz. Fortunately, the New York Court of Appeals agreed, striking down the ban on the grounds that it “exceeded the scope of its regulatory authority.”

Other nanny state battles should be fought with the same zeal as America’s sweet tooths. After all, it’s unlikely that the ninnies will stop anytime soon. In the FT survey, 68 percent of readers believe it is inevitable that regulators will attempt to shift tobacco style regulation into other lifestyle areas—and they’re not wrong. Many of these issues were discussed at FT’s Business Regulation Forum in Berlin last week, providing hope for a future of more intelligent rulemaking.

After all, industries do not need regulations to understand where society is going and how to adapt to a more health-conscious world. Electronic cigarettes are a healthier option than cigarettes and are a product of the free market. Soda companies are investing in healthier options because they are becoming more profitable. The citizens—not governments—of the world, should be setting the agenda for unhealthy industries by deciding what to consume.

It’s time for the world to recognize that not every public health issue can be solved with a bill. Making an item more expensive, harder to obtain, or simply banning it does not make it less desirable. While it’s been almost 100 years, Americans ought not to forget the damage the 18th Amendment did to society. Governments around the world should keep this in mind—along with other regulatory failures—when trying to control the lives of their citizens.