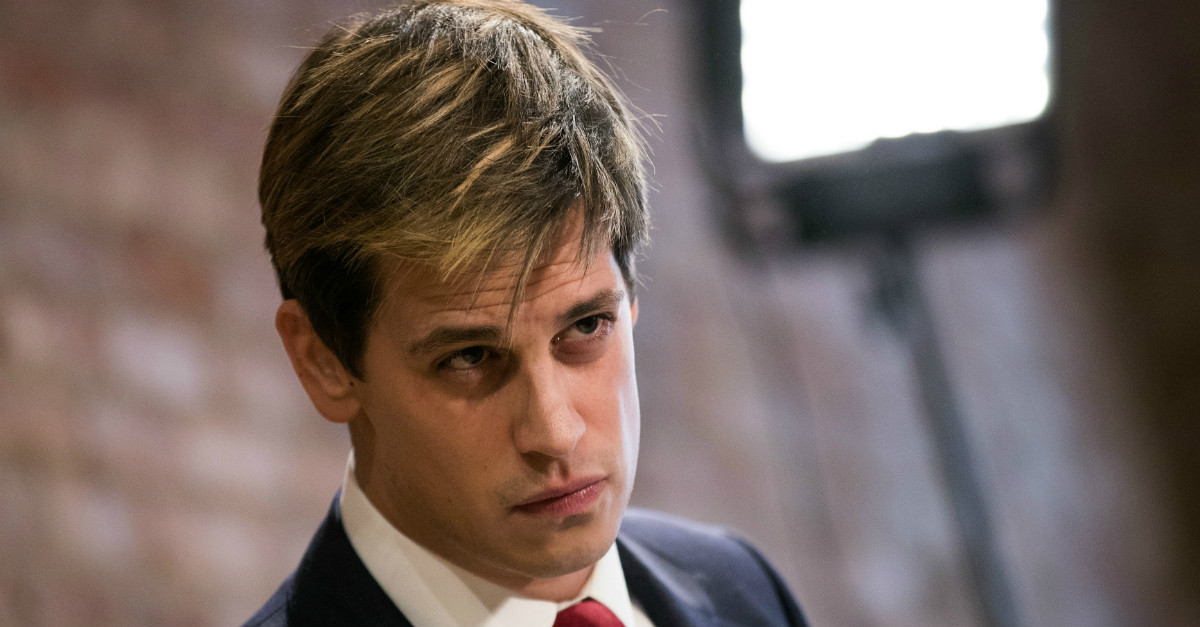 Photo by Drew Angerer/Getty Images
NEW YORK, NY - FEBRUARY 21: Milo Yiannopoulos speaks during a press conference, February 21, 2017 in New York City. After comments he made regarding pedophilia surfaced in an online video, Yiannopoulos resigned from his position at Brietbart News, was uninvited to speak at the Conservative Political Action Conference (CPAC) and lost a major book deal with Simon & Schuster. (Photo by Drew Angerer/Getty Images)

After a series of setbacks this week for Milo Yiannopoulos, pundits are rushing to declare his career is over. Perhaps the best assessment of what’s happened to Yiannopoulos comes from The Federalist’s Ben Domenech:

This whole episode serves as a reminder of what Milo is and what he is not. He is not a conservative, a libertarian, or an ideologue. He is an attention seeker and a provocateur who in practice amounts to a blunt instrument to use against the left because he confounds them as something they argue cannot exist. He is impossible, so the fact that he exists is infuriating.

“And he is not going to go away,” Domenech adds.

RELATED: Milo’s comments about pedophilia made me feel sorry for him

Despite his extreme behavior and rhetoric—and no doubt because of it—what ultimately animates Milo and his supporters is exactly what Domenech describes: Yiannopoulos has been successful in getting a rise out of the left, which makes conservatives feel good and liberals mad.

Milo’s purpose is not to spread a conservative message, or promote individualist-based libertarian philosophy or do anything that could possibly be misconstrued as a positive right-leaning blueprint for a better society.

He’s a battering ram for the right, and a villain for the left. Period.

And how much of our politics is just that now—people on left and right doing their best to needle the other side and make them look their worst?

It’s the reason Tomi Lahren has a career. It’s why Hollywood turns every awards show into a political rally. It’s why liberals try to turn Betsy DeVos into George Wallace, and conservatives rush to condemn Beyoncé as a racist. It’s why Nancy Pelosi thinks white supremacists are running the White House and Newt Gingrich used to think black nationalists ran it.

These are just some of the more guttural examples, but so much of our politics at the broadest level really is just about picking a side on the ideological spectrum and targeting the other. Reacting to what we consider the extreme dangers of the left or right—or more accurately, what threatens our own left and right identities—is why once blue states turned red in the presidential election, and also why millions of women and others marched around the world the weekend after President Trump’s inauguration.

They were casting votes and voicing dissent, important American and democratic traditions, but so many were also drawing battle lines arguably more cultural than political.

I’m not saying issues weren’t discussed, policies weren’t considered and there aren’t legitimate fears on the left and right about potential dangers posed. But the overarching driver of American politics, and probably all politics—nor is this necessarily new—is an us v. them dynamic too often impervious to reason or anything resembling critical thinking.

Polls right now show Americans are more divided than ever. This is not a result of meaningful conversations leading to more disagreement, but to longstanding divisions exacerbated by the 2016 election because of too much emotion and too little actual debate.

So many of us don’t even know how to talk to each other anymore. Too many conservatives see Donald Trump as a savior and too many progressives insist he’s the next Hitler. In between these extremes is a vast space where truth lives. More of us should live there.

Milo believes everyone just needs to come over to red America. Lena Dunham wants everyone on team blue. Fat chance either ever happens, but many believe this to be a legitimate goal.

At Rare Politics where we lean conservative but also libertarian, the 2016 election wasn’t as black and white as Trump and Hillary Clinton—or more apropos, Breitbart and Salon—made it out to be. Libertarians tend to take the best parts of the right (small government, individual liberty) and the left (less war, protecting civil liberties) and fight for those principles on their own merits. Along those lines, there were hopes and fears expressed about both candidates. We aren’t reflexively against the right or left—we’re against an ever-growing state.

But this middle of the road approach is anathema to so many partisans, left or right, as 2016 often reminded us.

Milo Yiannopoulos has never been moderate in any fashion, and has been one of the more entertaining figures in some time to pick a side in the cattiness we pretend is legitimate political debate. He’s not conservative or libertarian, but a rightwing attack machine in an age where so much of this nonsense has consumed our discourse that many can no longer tell the difference. Domenech writes of Milo:

He is a gay contrarian exhibitionist defined by his positions against the left rather than in favor of natural rights bequeathed by nature’s God, and he gives little purchase to the liberty of individuals defined by the limits of the non-aggression principle. There is no Burke or Locke in him, just the illiberal rage that seeks to end the somnolence of modern culture and address the enemies that are arrayed against them.

Say what you will about Yiannopoulos (and I have been mostly critical), but he knows how to play this game better than most. He also still has plenty of supporters, including many seemingly eager to dismiss his controversial pedophilia comments, and most of these people identify as conservatives. Ponder that for a second, and use it as a reminder of how good Milo is at pleasing his base.

Despite losing a book deal, a CPAC speaking slot or even his platform at Breitbart, why does anyone think declaratively that this is the end of Yiannopoulos? If the kind of partisan mindlessness that defines so much of our politics isn’t going away—why does anyone assume Milo will?