‘Eight Is Enough’: Where is The Cast Today? 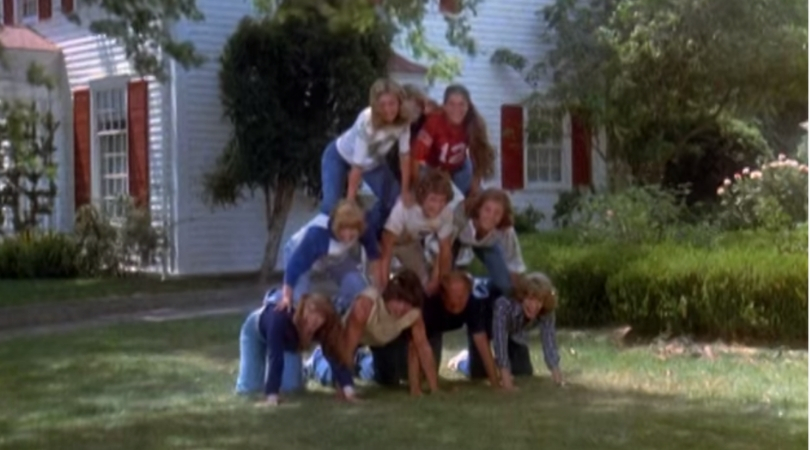 Eight Is Enough was a dramatic sitcom that ran from the late seventies to the early eighties. The five-season show was based on real events in the life of newspaper columnist, the real-life Thomas Braden. Thomas Braden actually was a parent to eight children and wrote a novel by the same name telling of his children’s adventures and lessons throughout their upbringing. In the show, The Braden clan was the Bradford Family, consisting of Nicholas Bradford, Elizabeth Bradford, Tommy Bradford, Nancy Bradford, Joannie Bradford, Mary Bradford, Tom Bradford, David Bradford, Abby Bradford.

He and his family were played the Eight is enough cast: Dick Van Patten, Diana Hyland, Betty Buckley, Grant Goodeve, Lani O’Grady, Laurie Walters, Susan Richardson, Dianne Kay, Connie Newton, Willie Aames, and Adam Rich. The show follows the rearing of the kids as well as adulthood and even shows some of them have kids of their own. The show also had a couple of spin-off [TV] movies including Eight is Enough: A Family Reunion and An Eight is Enough Wedding.

The cast reunited at the top of this year in Los Angeles to support their mother figure, Betty Buckley in her starring role in the broadway Hello Dolly tour! Despite it ending more than 30 years ago, some of the cast decided to continue their Hollywood route.

Where Are They Now?

Betty Buckley (Abby Bradford): Buckly had the hard but loving task of replacing the Bradfords’ mom which was played by Diana Hyland. Hyland passed away due to breast cancer after filming four episodes. The producers dealt with Joans Bradford passing, making Tom a widower at the start of season 2. Buckley then portrayed Sandra Sue “Abby” Abbott who then married Tom. Buckley continued in the spotlight, recently appearing on the TV show ‘Pretty Little Liars’ and The Chicago Code. She also is known in the theater world, which earned her a Tony Award for Best Actress in 1983 for singing “Memory” from Cats.

Dianne Kay (Nancy Bradford): Aside from the series, she appeared in Steven Spielberg’s 1941, a World War II comedy. Despite the success of the movie, she decided to stop acting in 1999 to raise a family of her own. Fun fact, she and Spielberg actually went to Arizona’s Arcadia High School together. She also starred in the series Reggie in 1983 and Glitter in 1985.

Willie Aames (Tommy Bradford): A bad boy on the show, he turned a metaphorical leaf and portrayed the character Bibleman for almost a decade after conquering his cocaine habit. He also co-starred with Scott Baio on Charles in Charge from 1984 to 1990. Aames also decided to step away from acting and became a successful financial adviser.

Grant Goodeve (David Bradford): The oldest child in the Bradford family, Grant Goodeve sang the Eight is Enough theme song. His career to date includes shows such as Dynasty, Northern Exposure, hosting a travel show, as well as voice work for commercials and video games. Despite him being in his 60’s, he pretty much looks exactly the same since 1981.

Connie Newton (Elizabeth Bradford): The youngest Bradford daughter, Elizabeth, portrayed a dancer in the TV series Fame from 1982-1983. After getting married, she changed her name to Connie Needham. She is an ovarian cancer survivor and a mother of two daughters.

Laurie Walters (Joanie Bradford): Laurie Walters appeared on Happy Days before she was apart of the Bradford Family. Last seen in The Common Sense Wisdom Tree in 1999, the actress is active in environmental causes and part of a film club in Los Angeles.

Susan Richardson (Susan Bradford Stockwell): Was also on Happy Days before joining Eight is Enough. She played a character with her same name. She was a subject of controversy in 1987 after claiming she had been kidnapped and almost murdered by North Korean filmmakers. There are still conflicting reports about the accuracy of her shocking story. Richardson also battled addiction and didn’t participate in the 2010 Today Show cast reunion. She now lives in Pennsylvania away from the limelight and works at a nursing home.

Adam Rich (Nicholas Bradford): The youngest in the Bradford family had some trouble involving jail and drugs as he grew up a child actor but overall seems to be recovering well. He had a recurring role on the series Code Red from 1981 to 1982 and reunited with costar Willie Aames to star in the animated Dungeons and Dragons. He willingly participated in an epic prank created by Dave Eggers’ Might magazine in the mid-’90s. The magazine had published a story claiming he had died, but obviously he didn’t. He’s alive and well.