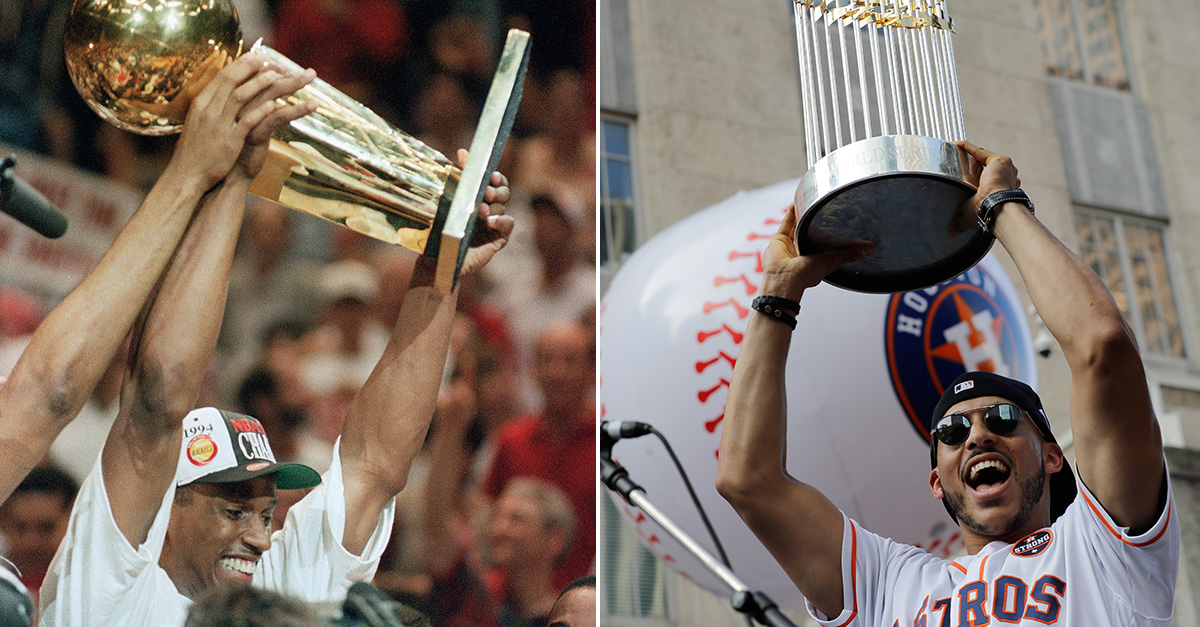 On Wednesday, November 1, the Houston Astros won their first World Series title in the franchise’s 55-year history. On Friday, November 3, more than a million people jammed the streets of downtown Houston for the team’s victory parade. The team’s record number of home runs, including five by World Series Most Valuable Player George Springer, earned the team the nickname, ?Crush City.?

However, it wasn’t the first time a Houston team had conquered an historic franchise and brought home a title. In June 1994, after enduring a historic playoff collapse the previous year, the Houston Rockets earned the first of their back-to-back NBA titles in a tough seven-game series against the New York Knicks. The Rockets came from behind earlier in the playoffs, changing their name from ?Choke City? to ?Clutch City.?

So which title means more to Houston? Let’s go to the Tale of the Tape.

RELATED: James Harden plans to retire from the Rockets after signing extension

The Rockets had reached the NBA Finals twice before (1981, 1986), losing both times in six games to Larry Bird’s Boston Celtics teams.
The Astros had reached the World Series once before, losing four straight to the Chicago White Sox in the 2005 Fall Classic.
EDGE: Astros

After the Oilers blew a 35-3 halftime lead against the Buffalo Bills in the 1993 AFC Wild Card Game, and the Rockets blowing a 3-1 lead against the Phoenix Suns in the NBA Playoffs a few months later, Houston was desperate for a championship. The Rockets turned ?Choke City? into ?Clutch City? and gave Houston a reason to celebrate.
After four years of 90-plus loss seasons from 2011 to 2014, along with the devastation of Hurricane Harvey in 2017, Houston was desperate for something to cheer about. The Astros turned ?Houston Strong? into a motto for the whole country and gave Houston a reason to celebrate.
EDGE: Astros

While the Rockets gave the city its first title, the Astros’ victory means just a bit more in a historical context.

So when can fans expect the Texans to bring a Lombardi trophy home? Unfortunately, with so many injuries and so much team turmoil, Houston won’t host a Super Bowl victory parade any time soon.