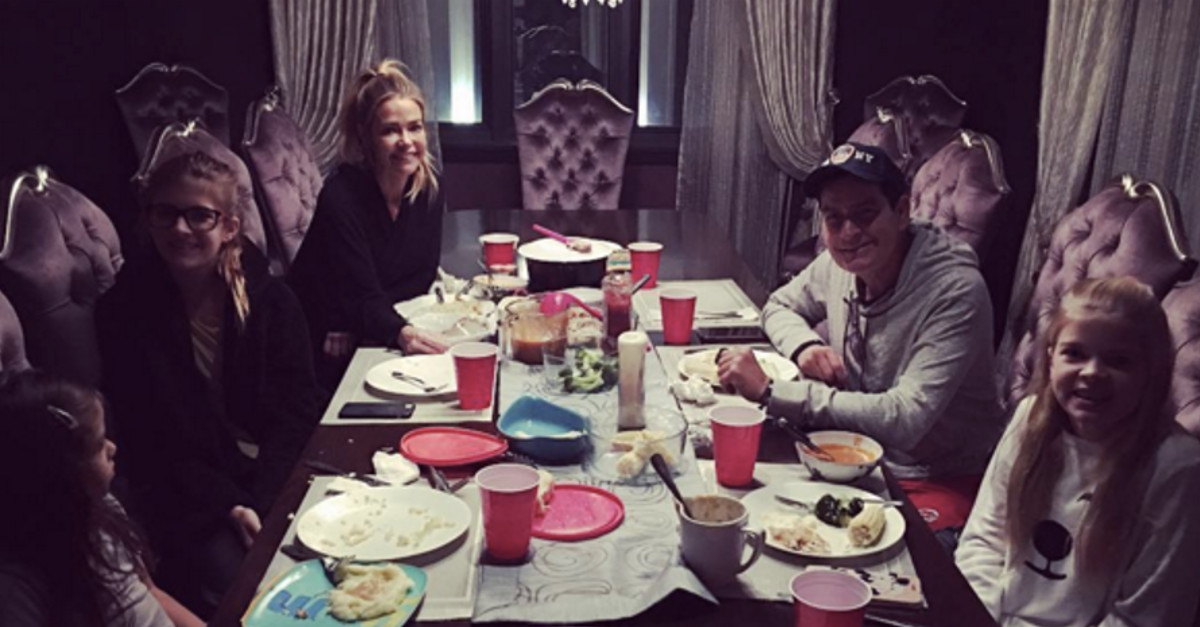 Though their co-parenting relationship has often been contentious, Denise Richards made it clear this week that she and her ex-husband Charlie Sheen are still family.

The “Wild Things” star, 45, shared a sweet family photo of her family sitting at the dinner table. Pictured are Sheen, 51, and their two daughters, 12-year-old Sam and 11-year-old Lola, along with Richards’ own adopted 5-year-old daughter, Eloise.

RELATED: Charlie Sheen?s oldest daughter is all grown up and looking as cute as ever

Sheen and Richards married in 2002 and divorced in 2006. Their relationship has not always been smooth sailing. Richards filed for divorce from Sheen in March 2005, while she was pregnant with their second daughter. Though the two briefly reconciled, Richards eventually followed through with the divorce in January 2006. She even sought a restraining order against Sheen, alleging that he sent her death threats.

Though the couple experienced a nasty legal battle for custody of their children, they eventually cleared the air and have been on good terms since 2012.

And Sheen and Richards certainly seem to be on good terms now! Richards shared this sweet photo on Jan. 4, captioned, “We’ve had a colorful year …at the end of the day we’re still a family.. @charliesheen #familydinner.”

We've had a colorful year …at the end of the day we're still a family.. @charliesheen #familydinner

On November 17, 2015, Sheen openly admitted to being HIV-positive during an interview with Matt Lauer on NBC’s “TODAY.” The “Two and a Half Men” star revealed he had been diagnosed four years prior, in 2011.

Sheen?s physician, Dr. Robert Huizenga, also appeared on ?Today? and made it clear that Sheen does not have AIDS and could not have infected anyone else. He said that drugs have suppressed the virus and Sheen has an ?undetectable level” of HIV in his blood.