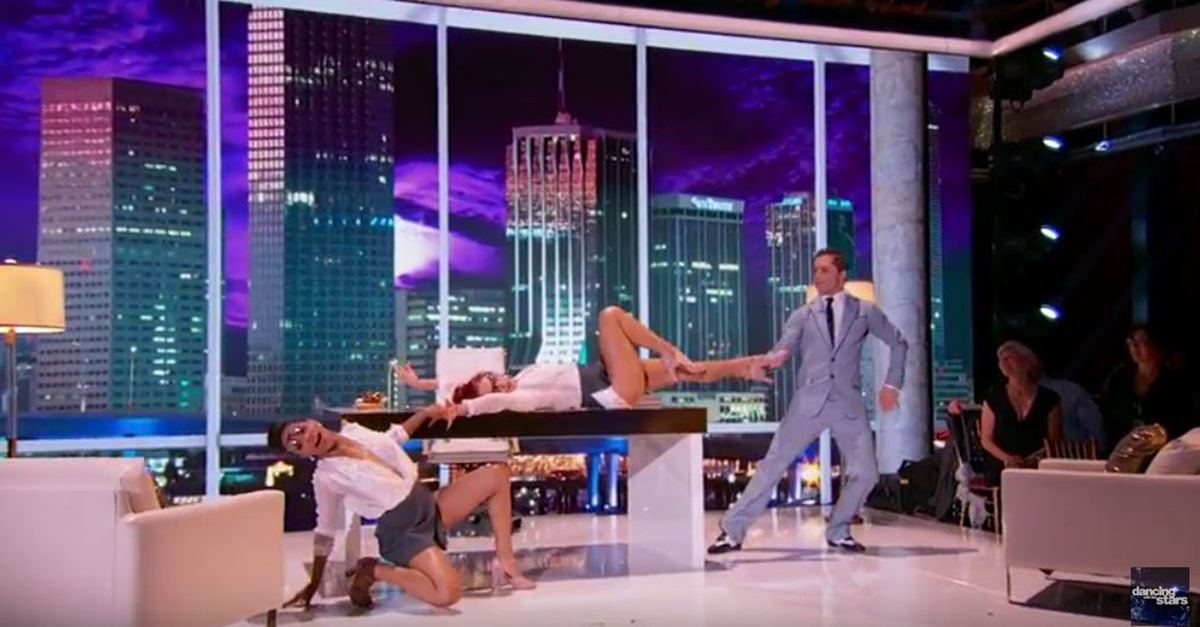 On Monday night, Bonner Bolton and Sharna Burgess invited “Dancing with the Stars” troupe member Britt Stewart into a trio dance routine that was unfortunately, a little too hot for some.

In the routine Bolton played a money making hot shot who had two women fighting for his attention. Burgess was nervous about the routine ahead of the competition, but not because of its risque nature.

“This is very much like an intertwined office love triangle, love affair,? she said during rehearsals. “We are having a lot of fun in this trio, but we don?t quite have the moves down yet.?

After the performance, host Tom Bergeron was at a loss for words as he invited the three down for judges critiques.

RELATED: According to Andy Cohen, this is exactly what Ryan Seacrest needs to know about his ?Live!? co-star Kelly Ripa

“I can’t even adlib,” Bergeron said with a nervous laugh. “There are no words.”

Well, the judges had no problems finding words for the routine.

“I feel like I need to take a shower. It was kind of raunchy,? judge Carrie Ann Inaba said. ?I mean, you guys looked amazing and very sexy, and I loved the high concept. It was very clean and pristine. And I felt like Bonner you didn?t pop as much as I needed you to pop next to these two booty-popping but you didn?t booty-pop, I noticed that ? a lot, but not quite enough Bonner from you.?

Len Goodman also felt a bit uncomfortable by the sexiness for the routine.

“Rashad, he did an Argentine tango that had a bit of passion about it. ? From me, this was a little bit too. I?m 73. [It was] a little bit too raunchy for the old guy, really,? Goodman said.

RELATED: After months of waiting, Bristol Meyer is finally meeting her third child

The trio was then awarded 28 out of a possible 40 points, the lowest scores for the group routines.

In the end, Bolton and Burgess were eliminated from the competition.

“I was very, very surprised at how far I went. I went further than I ever knew I would,” Bolton said after the elimination. “I?m so thankful for the journey that I got to take. I found out how far I can really push myself and how much I can take.?