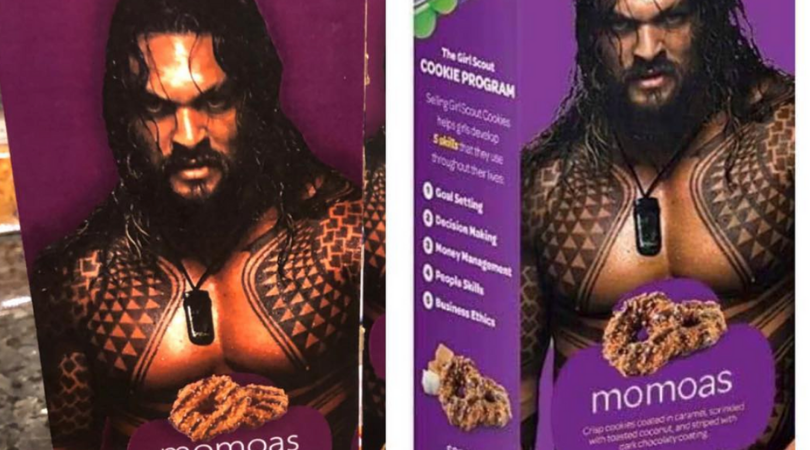 Not to portray every woman as a Kathy cartoon, but there’s a good chance most women aren’t going to be able to resist both chocolate and the bare arms and chest of Jason Momoa. Not combined. And that’s only the women. Momoa shirtless is going to catch anyone’s eye. Even the straightest of men will do a double take at Aquaman flexing on a box of cookies.

So then kudos to Girl Scout Charlotte Holmberg, who was already the top cookie CEO in Highlands Ranch, Colorado but is now basically the Jeff Bezos of slinging cookies. She came up with the idea for Momoa Somoas and, once again, she’s the top seller in her area.

I want to put that in my mouth. THE COOKIES, I mean. This is A+ work on the part of Charlotte. Again, who says no to a Girl Scout this clever. Somoas aren’t even in my top three favorite Girl Scout cookies and I’d buy a box just out of appreciation for the ingenuity. Usually, I like to keep my Girl Scout cookies in the fridge because they taste better cold but if I did that this HOT Momoa box would probably ruin my produce. Because he is a hot piece of beef, is what I’m trying to say. (How do the oceans not boil with that man in them?)