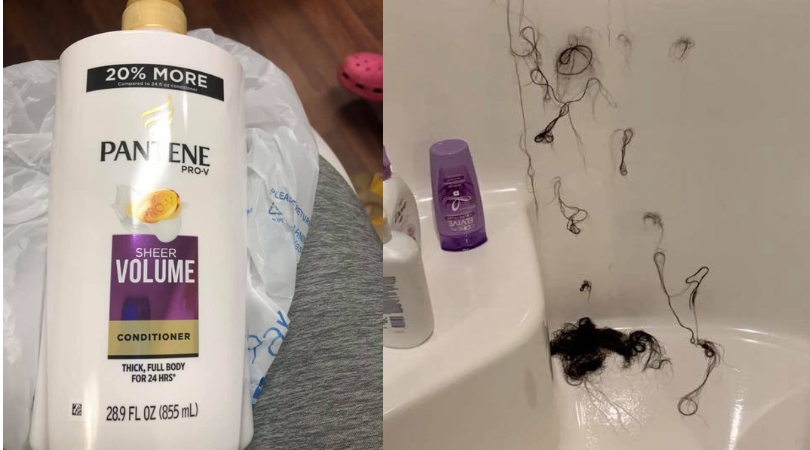 Great, it looks like we all have one more thing to worry about. A mother is urging shoppers who purchase products at Walmart to double-check if any of the items have been tampered with before buying them. This after her daughter discovered her conditioner bottle contained Nair inside the product. Nair is a hair removal product that works by breaking the “disulfide bonds of the keratin molecules in hair” which makes it easier for hair to be wiped away easily without using a razor.

According to Taffy Jo Timms, her daughter bought Pantene Pro-V shampoo and conditioner at Walmart in New Richmond, Wisconsin. Ashley quickly began to panic when she saw heavy chunks were falling down to the floor, realizing someone had mixed in Nair in her conditioner bottle. The mother shared a picture of the girl’s shower which shows Ashley’s hair stuck on the walls.

When they opened the bottle, they found the product was an “ugly pink color” instead of the traditional white color that Pantene conditioner should be. The family contacted authorities and stated they will be reviewing camera footage and investigate the incident. Unfortunately for Ashley, after a consultation for extensions, hairdressers ended up shaving her head since her hair kept falling out.

Now, I don’t know about you, but this seriously broke my heart. Whoever decided to got to Walmart one day and just tamper with the shampoos and conditioners seriously needs to get a life. This isn’t just devastating, but it’s cruel. This girl was probably shattered and emotionally wrecked after she saw her hair fall off. It’s pretty much one of the harshest things one can do.

I get the whole “tampering with groceries” is at a record high right now, but this is just crossing the line. For those of you who are saying, “it’s just hair it will grow back,” yeah sure, I get that. But these are the types of incidents that make you question someone’s humanity. This girl could have seriously gotten hurt if the product either went into her eyes or her mouth.

As a reminder to every one, since we can’t go to the grocery store anymore and pick up either our favorite ice cream, mouthwash, toothpaste, or shampoo without us worrying about it being messed with, always make sure the seal inside hasn’t been tampered with. The world is a scary place.