Tuesday night as a very weird live show for judges Mel B., Howie Mandel, Heidi Klum and Simon Cowell, and host Tyra Banks there are well.  So much went wrong and seriously disrupted the show’s flow. First, there were technical problems, showing the thrill — and problems — with live TV. Light Balance, the dance act, couldn’t perform live because of technical difficulties, and Demain Aditya, the escape artist, had his act ruined by technical difficulties.

Then, there was an angry Mel B. throwing her drink on Simon when he told a rude joke about her wedding night.

But tonight is another night, with the live results show in which we find out which seven acts move on. The magician Eric J0nes, singer Evie Claire and singing group The Masquerades were on the bubble, awaiting for viewers to vote during the “Dunkin Save” portion of the program. In the end, it was the night of the singers, as four of the seven acts that made it through were vocalists.

Tough decision.. Two of their members had to leave the auditions early because their parents wanted them to concentrate on school, the story goes. So the remaining members put on an awesome dance performance that brought the crowd to its feet during the taped auditions. The live audition was equally as thrilling for everyone except Howie, who said he didn’t get a “wow.” But they didn’t wow enough.

Trent and Colton are mirror twins, hence the name of their act, Mirror Image.  They’ve had a tough time with Simon through the competition, who has never warmed to their cutie-awkwardness.  We’ve seen them sing Who’s Loving You, which came with  wild dance that seemed to lose Simon a bit.  And the same thing happened Tuesday night, when Simon pressed the dreaded red X again. And anytime an act gets an ‘X,’ that tends to spell doom. And, it did.

The singing group is made up of three friends who have known each other since high school, Now, 50 years later, they’re in their 70s, and still chasing the dream. During the audition round, they belted out the Sam Cooke classic, “A Change is Gonna Come,” they got four yeses so they could continue their dream because, they never  stopped dreaming. So during judge cuts, they did Bring it on Home to Me in the same tight harmonies and power as they did during the auditions. For the live show, they sang an original song — I’m just an average guy — that was written in 1969 but never released — until tonight. But unfortunately, that wasn’t good enough, and they didn’t make it through.

The technical difficulties during the live show may have gotten poor Demain, He nailed himself on a box, handcuffed, from in the air, and had to escape before a blow torch frayed a rope and forced the box to crash on flaming spikes. But there was a technical problem that ruined the act, and ruined his chance to move on.

The Pompeyo family — mom Natalia, daughter Katerina and husband/dad George —  love their dogs. All 18 of them. The family has a dream of having its own Las Vegas show, and they don’t seem that far off, with a dog that can do a handstand, balance on someone’s hand, or walk on their front legs. The dogs also jumped rope, jumped through a hula hoop — all sorts of stuff.  But despite how good they are, they weren’t quite good enough. Still, this is an act we could see in Las Vegas. 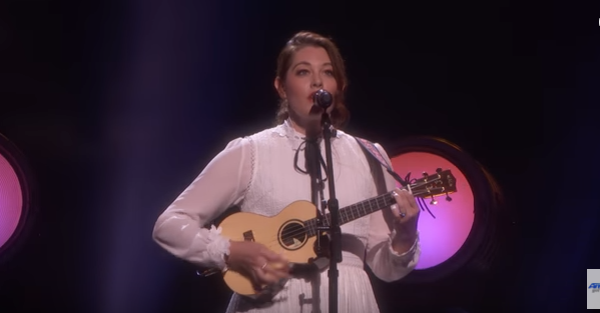