it was mission accomplished for Blaine Garcia and Wyatt Walton after the two hunters successfully tracked down and tied up 790-pound “BoarZilla” in Texas.

“I did a double take. I couldn’t believe his size, and he took off running down a draw. I tried to walk up and get a better look but he kept running off as I approached,” Garcia told The Flash Today. “I got on the phone and called my friend Wyatt Walton, who was in Cross Plains, and told him what I had found.”

Garcia and Walton were aided by two trusty hunting bulldogs, which picked up the scent of the boar. 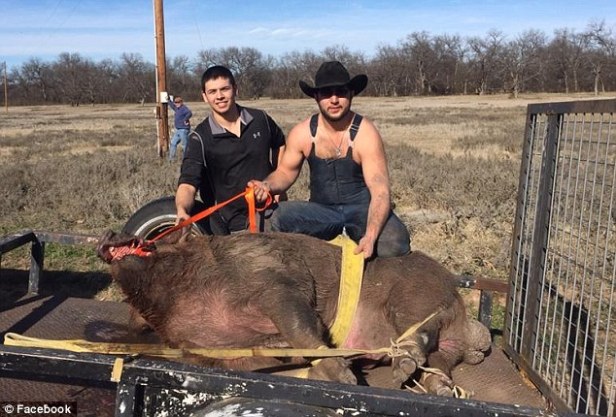 “There was the distinct smell of wild boar hog and you could smell it even more as we began to work up a brushy hill. When I had almost topped it I could see him moving toward us and around, so we got by a big oak tree and kind of hid behind it,” Garcia said.

Then it was time to capture it.

“The pig was really squealing and running around in circles and I’m hollering for Wyatt to come running, and he’s probably about 400 yards away,” he said.

“When I first saw him, Blaine’s dog looked like an earring or some kind of jewelry hanging off the hog’s head, but it really wasn’t until we got ahold of the hog that I realized how big and powerful this animal was,” Wyatt Walton added.

Even after tying three legs together the boar still tried standing up, but the hunters got the best of him.