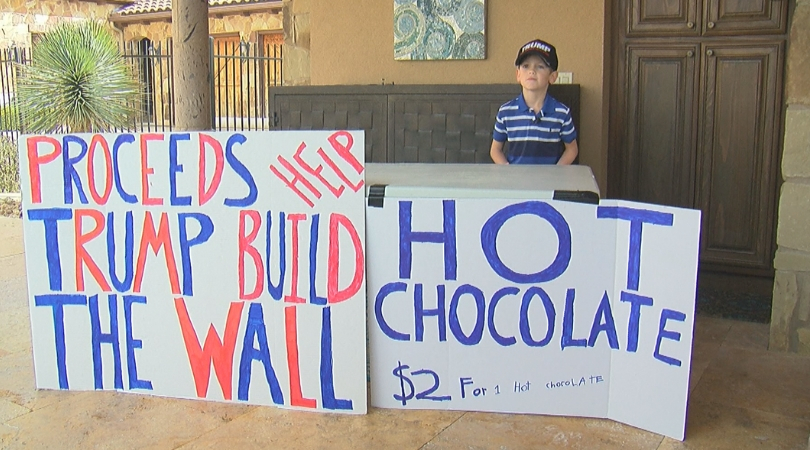 It looks like the hot chocolate business is where we should all be. 7-year-old Benton Stevens has reportedly raised over $22,000 to support Trump’s planned border wall. The stand, which was initially put up in February, quickly turned into an online store, selling “Liberty Lemonade Mix,” “Freedom Hot Chocolate,” and MAGA hats signed by Benton.

Not surprisingly enough, the fundraiser is causing a heavy amount of controversy from non-Trump supporters, pointing out that it’s unlikely the 7-year-old understands the complicated moral intricacies of building a physical wall at the border. This especially since the Trump Administration is currently facing criticism due to the callous treatment of detained migrants. Some are also blaming Benton’s parents of “using him as a political pawn.”

Benton?s mom, Jennifer, stated her son was inspired to create ?Benton?s Stand? while watching Trump’s latest State of the Union Address. The mom reportedly said that he heard the president say they needed to close the border to protect the country and make it safe. Benton hopes to raise $50,000 in support of the wall. You can visit his website bentonstand.com, where a percentage of what he makes goes towards the nonprofit ‘Securing Our Borders and Turning Point USA.’ There is also a place for direct donations for ‘We Build the Wall Inc’ nonprofit.

Editors Note: This article was originally published on February 19, 2019. It was updated on June 11, 2019, to showcase the amount Benton Stevens has raised during his fundraiser for President Donald Trump’s proposed wall. Original article below.

—
A 7-year-old boy from Austin, Texas is facing backlash after neighbors took offense to a hot chocolate stand he started, to raise money for President Donald Trump’s proposed border wall. According to the boy’s parents, Shane and Jennifer Stevens, their son Benton decided he wanted to start the fundraiser after attending the inauguration and watching the State of the Union address earlier this month.

Both parents are members of the Republican National Convention and consider themselves conservatives. They believe Benton was influenced after watching news coverage they follow on a daily basis, and by listening to the conversations they have at the dinner table. The mother stated it was important for not only her child but every child know what’s going on in the world.

The boy allegedly begged his parents to set up a hot chocolate stand to raise money for the wall and set up a stand at Steiner Ranch strip mall in Austin. According to the 7-year-old, he has been ridiculed in the past for his political beliefs, including at President Donald Trump’s inauguration, which he attended with his parents. The boy said three women in pink hats made fun of his MAGA hat. Despite his parents’ activity in politics, Jennifer said she never encouraged her son to get political, rather he happens to be “a very mature 7-year-old who wants to be involved in this.”

According to Benton, while selling the cocoa, one man called him “little Hitler” and people around him were happy. Shane, Benton’s father, believes this is a teaching tool for his children and wants to help them understand that there is always going to be a backlash, despite the situation.

Not getting discouraged by the name calling, the boy stated he still plans to raise money for the wall and mail it to President Trump or go to Washington and give him the money in person, “so that illegal immigrants can’t get into our town illegally.”

I’m just going to nod my head at this to not get in trouble for saying something I shouldn’t. Take it as you will.