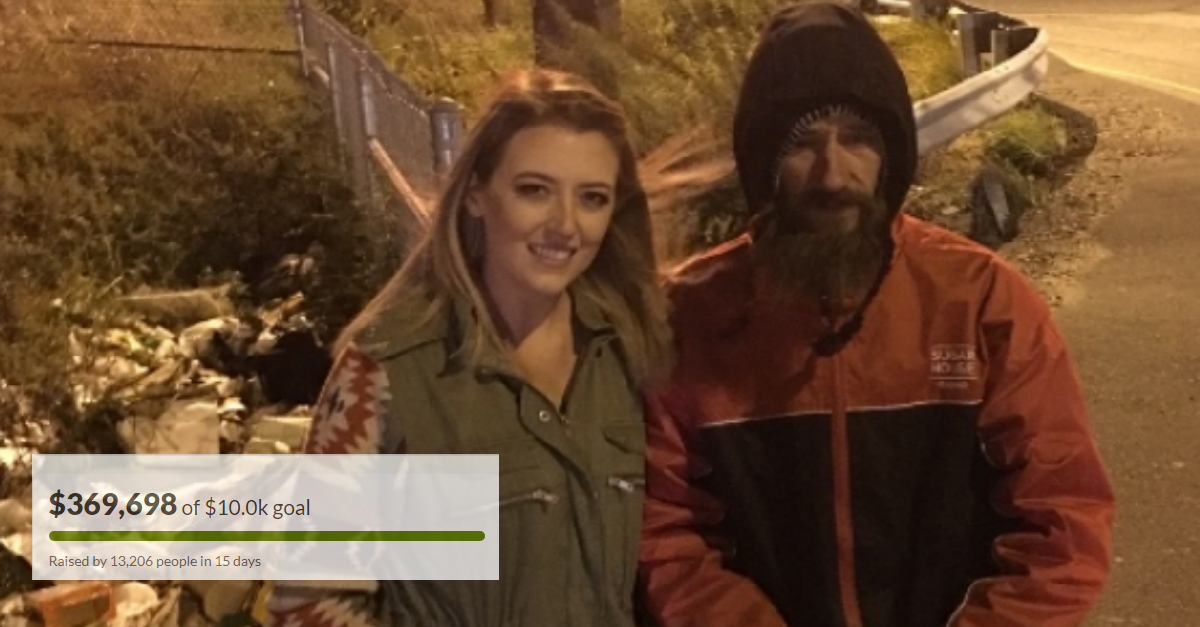 A homeless veteran who gave a 27-year-old woman his last $20 for gas has received hundreds of thousands of dollars after the woman kick-started a crowdfunding effort on GoFundMe.

Kate McClure started the GoFundMe campaign after receiving unsolicited assistance from a homeless Marine veteran and EMT named Johnny Bobbitt Jr., who came to her rescue while she was stranded on Interstate 95 outside Philadelphia, Pa.

Speaking to the Philadelphia Inquirer, McClure said that she was initially frightened when she pulled over on a stretch of deserted highway shortly before midnight. “My heart was beating out of my chest.”

She phoned her boyfriend and asked him to come get her. But as she waited for help to arrive, Bobbitt Jr. emerged from the darkness and approached her car.

Bobbitt, who new the area well, told McClure to lock the doors and stay in her car while he went to get some fuel. McClure, said she didn’t have any money to repay him that night, but he used his last $20 to buy her some gas anyway.

McClure and D’Amico returned to the spot where McClure was stranded several times over the next few days. They gave Bobbitt cash, food and clothes. But perhaps more importantly, they got to know him. They talked to him, and they listened to him.

“I can?t stop thinking about this guy. I think about him all the time,” D’Amico texted McClure. “OMG! Me, too!” McClure replied. And that’s when they decided to do something more.

RELATED: 5 years after her dad died, a Tennessee woman turned 21 and got a letter from him she?ll cherish forever

Bobbitt said he has been “overwhelmed” by the generosity of strangers after McClure’s fundraising campaign exceeded its initial $10,000 target. Donations currently stand at more than $360,000, and that figure continues to grow as more and more people donate money to help the former Marine, who has been homeless for a year and a half.

The pair were reunited on a recent edition of “Good Morning America,” where Bobbitt vowed to pay forward a portion of the money in order to assist others.

“That’s how I got the money to start with, from other people,” he said. “[I have to] return the favor. I can’t constantly take and not give back.”

“This money was given to help me. Why not help other people in similar situations or people that are actively helping other people in different situations?” he continued. “Everybody out there is facing some kind of struggle, so if I can touch their life, the way mine was touched, [it’d be] an amazing feeling,” Bobbitt said. “I want to feel the feeling on the opposite end.”