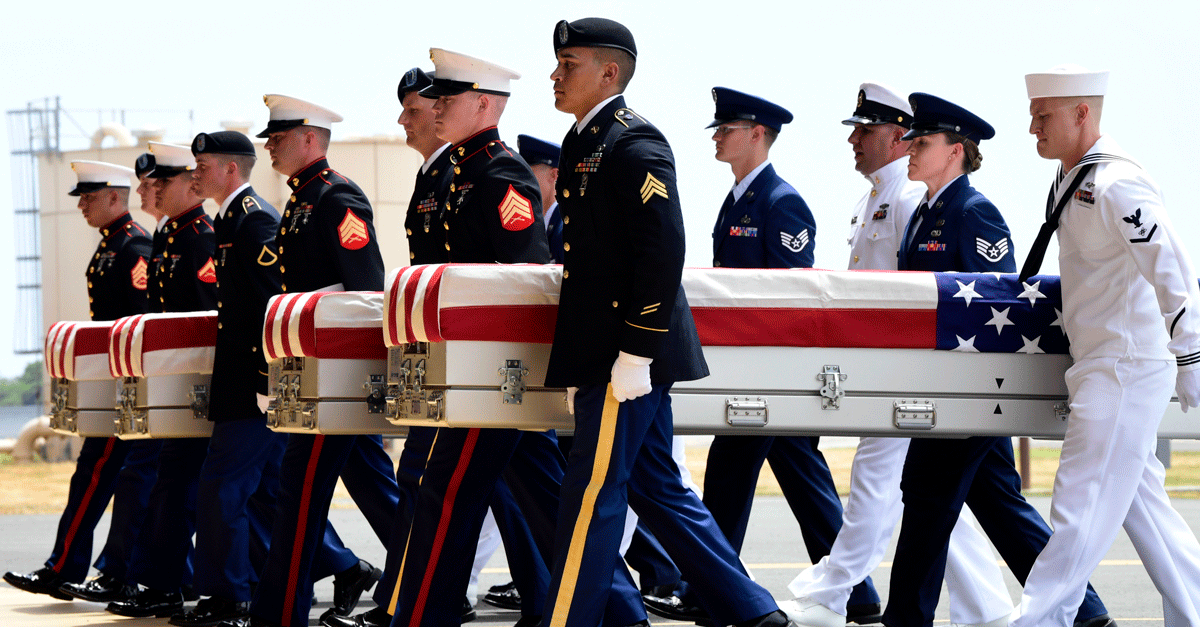 HONOLULU (AP) ? The U.S. military is beginning the painstaking process of analyzing remains from the Korean War now that they are back on American soil after having been handed over by North Korea last week.
Vice President Mike Pence and the top commander of U.S. forces in Asia, Adm. Phil Davidson, received the remains contained in 55 caskets during an emotional and solemn ceremony Wednesday after the caskets arrived by military cargo jets from South Korea.

“They were husbands and fathers, brothers and neighbors ? long gone, but never lost to the memory of their loved ones,” Pence said during the ceremony at a military base in Hawaii. The homecoming comes 65 years after an armistice ended the conflict and after President Donald Trump received a commitment from North Korean leader Kim Jong Un, at their June summit in Singapore, for their return.

Trump, in a tweet Wednesday night, thanked Kim “for keeping your word & starting the process of sending home the remains of our great and beloved missing fallen! I am not at all surprised that you took this kind action.”
Each container was covered in an American flag and carried off the aircraft by one Marine, one sailor, one soldier and one airman. The troops carefully set each box on risers inside a hangar as Pence stood watching with his hand over his heart. Davidson saluted. Some of the invited guests wiped tears from their eyes during the procession.

The homecoming comes 65 years after an armistice ended the conflict and weeks after President Donald Trump received a commitment from North Korean leader Kim Jong Un for their return. The Defense POW/MIA Accounting Agency will take the remains to a lab on the base where forensic anthropologists will study bones and teeth to identify their race, gender and age. Scientists will extract DNA and compare it to DNA samples collected from families of troops still missing from the war. The agency usually also relies on any items that may have been found with remains like uniforms, dog tags and wedding rings to identify remains. But North Korea only provided one dog tag with the 55 boxes it handed over last week. It could take months or years to determine their identities.

“Some have called the Korean War the ‘forgotten war.’ But today, we prove these heroes were never forgotten,” Pence said. “Today, our boys are coming home.”

The U.S. military believes the bones are those of U.S. servicemen and potentially servicemen from other United Nations member countries who fought alongside the U.S. on behalf of South Korea during the war.
Australia, Belgium, France and the Philippines have yet to recover some of their war dead from North Korea.

“Whosoever emerges from these aircraft today begins a new season of hope for the families of our missing fallen,” Pence said. “Hope that those who are lost will yet be found. Hope that after so many years of questions, they will have closure.”

There are 7,699 U.S. service members listed as unaccounted for from the 1950-53 Korean War, of which about 5,300 are believed to have died on North Korean soil. The remainder are those who died in South Korea but have not been recovered; those who died in air crashes at sea or on ships at sea, as well as a number who are believed to have been taken to China. During his summit with Trump, Kim also agreed to “work toward complete denuclearization of the Korean Peninsula” in return for Trump’s promise of security guarantees. Trump later suspended annual military drills with South Korea which North Korea had long called an invasion rehearsal.

But Trump now faces criticism at home and elsewhere that North Korea hasn’t taken any serious steps toward disarmament and may be trying to buy time to weaken international sanctions against it. North Korea halted nuclear and missile tests, shut down its nuclear testing site and began dismantling facilities at its rocket launch site. But many experts say those are neither irrevocable nor serious steps that could show the country is sincere about denuclearization. North Korea may want to use the remains’ return to keep diplomacy with the United States alive and win a reciprocal U.S. concession. Experts say the North likely wants a declaration of the end of the Korean War as part of U.S. security assurances.

An armistice that ended the Korean War has yet to be replaced with a peace treaty, leaving the peninsula in a technical state of war. North Korea has steadfastly argued its nuclear weapons are meant to neutralize alleged U.S. plans to attack it.
___