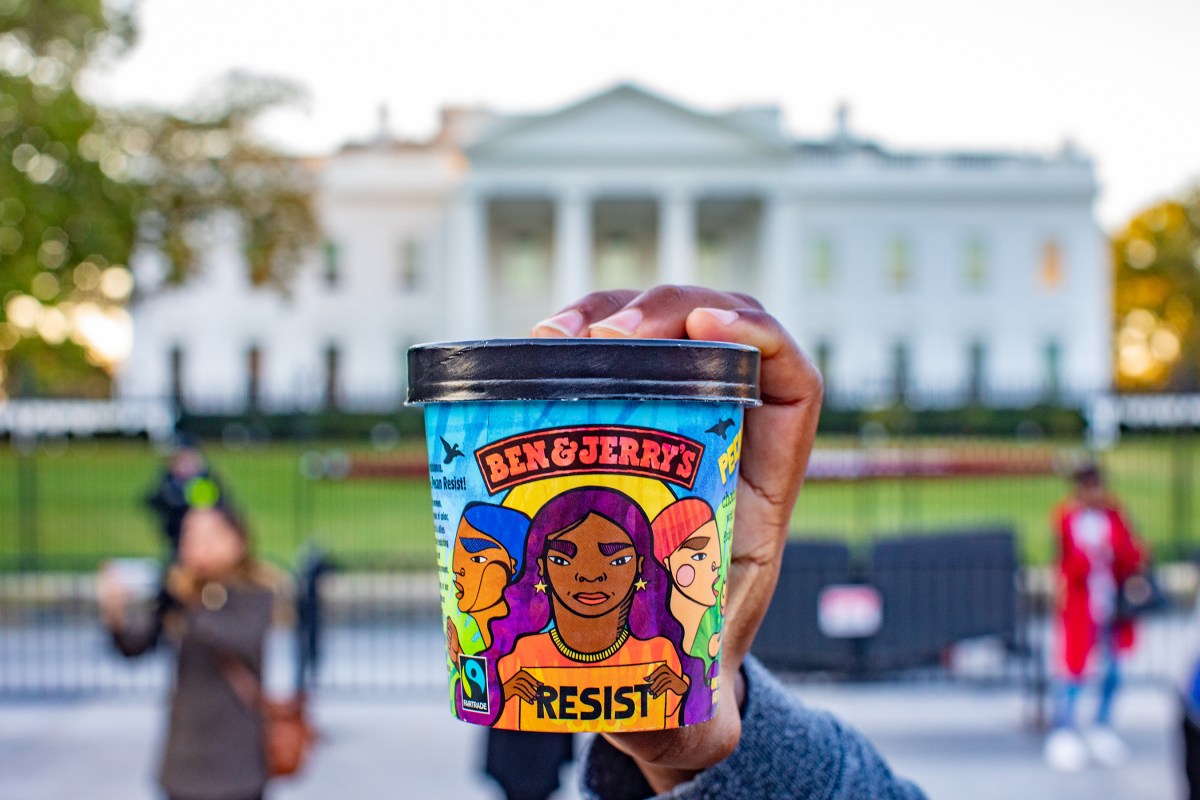 The popular Burlington, Vermont ice cream company, Ben and Jerry’s has released a new ice cream flavor inspired by President Trump. And when we say inspired, we mean it’s a flavor that was created to take a stand against the Administration’s agenda and to peacefully protest the attacks on what the company values.

The flavor, Pecan Resist, heads the campaign to fight injustice and push forward those who are fighting for a more equal nation. The limited-edition ice cream was created to celebrate the activists who are continuing to resist oppression, harmful environmental practices, and injustice in today’s society.

The flavor consists of rich chocolate ice cream swirled with white and dark fudge chunks, pecans, walnuts, and fudge covered almonds. Customers can get a pint of the ice cream for $6.99 or grab a scoop of the new flavor at a scoop shop.

The ice cream will highlight four groups and movements that are focused on belonging, community, freedom, and justice. The four groups include Color of Change, Honor the Earth, Women’s March and Neta. Color of Change design powerful campaigns to end unfair practices towards Black people. Honor the Earth works with Indigenous communities fighting for issues of climate change, renewable energy, and environmental justice. Women’s March focuses on the power of diverse women and their communities to create social change, and Neta is the fastest-growing independent media platform led by people of color on the Texas-Mexico border.

Welcome to the resistance. Together, Pecan Resist! We honor & stand with women, immigrants, people of color, & the millions of activists and allies who are courageously resisting the President’s attack on our values, humanity & environment. We celebrate the diversity of our glorious nation & raise our spoons in solidarity for all Americans. Take a stand & join those on the front lines at benjerry.com/pecanresist.

Ben & Jerry’s is donating $25,000 to each of these organizations and is asking members of the community to sign their petition on their website.

This isn’t the first time the ice cream brand got political. The company has been a strong advocate for LGBTQ equality since the 1990’s, and in 2015 when the Supreme Court made the monumental decision on marriage equality, the brand renamed Chocolate Chip Cookie Dough to I Dough, I Dough for the summer. Back in 2009, the company released “Yes Pecan” to commemorate President Obama’s slogan, “Yes we can.”

Thanks for helping me to stick with my diet! I won’t be buying your ice cream anymore. #BoycottBenAndJerrys

Lol when will companies learn? You make ice cream, we want ice cream, not your political takes. Now no more @benandjerrys in our home. #BoycottBenAndJerrys pic.twitter.com/7NMHblFBYh

Watch: How Much Does It Cost to Attend an NFL Game?