Menu
Follow us
Search
Menu
Search
Leslie Corp holds up an American flag and the Gadsden flag while waiting outside of Roseburg Municipal Airport for President Barack Obama's arrival in Roseburg, Ore., Friday, Oct. 9, 2015. Gun-rights activists say they plan to protest when Obama visits here Friday to meet with families of victims of last week's college shooting rampage. They are angry about Obama's call for more gun restrictions after the killing of eight students and a teacher. (AP Photo/Ryan Kang)

In the latest of seemingly unnecessary things that the government has its paws in, the Equal Employment Opportunity Office (EEOC) will decide if wearing the Gadsden flag creates a hostile work environment, punishable as racial harassment.

The Gadsden flag comes from the Revolutionary War era. It is a yellow flag with the words “Dont tread on me” emblazoned on it, and a rattlesnake coiled up the middle. Most recently, it has become a banner of limited government types and the tea party.

As Fox News reports, “the EEOC said it received a complaint in January 2014 from an African-American federal employee about a coworker wearing a hat bearing the flag.”

The issue of harassment stems from the creator of the flag, Christopher Gadsden, who was a slave trader.

The Equal Employment Opportunity Office has already deemed the wearing of Confederate Flags workplace harassment, The Washington Post explains, adding, “unsurprisingly, this is extending to other political speech as well.”

RELATED: Conservative extremists? The right is nowhere as extreme as the left right now

The Gadsden flag complaint argues that the flag is a “historical indicator of white resentment against blacks stemming largely from the Tea Party.”

The case notes that “it is clear that the Gadsden Flag originated in the Revolutionary War in a non-racial context…[h]owever, whatever the historic origins and meaning of the symbol, it also has since been sometimes interpreted to convey racially-tinged messages in some contexts.”

Eugene Volokh of the Washignton Posts Volokh Conspiracy blog writes his concern that making paraphernalia like the Gadsden flag not allowed at work hampers free speech and creates an undue liability for employers.

What if an employee came to work with a Trump/Pence bumper sticker? he asks. Or shares a “Stop Illegal Immigration” sign on his cubical wall? Will these things too be considered racial harassment?

Should the flag be ruled harassment, “all employers – private and public – where employees wear the flag could be held liable for workplace harassment if they receive complaints,” Fox News notes. 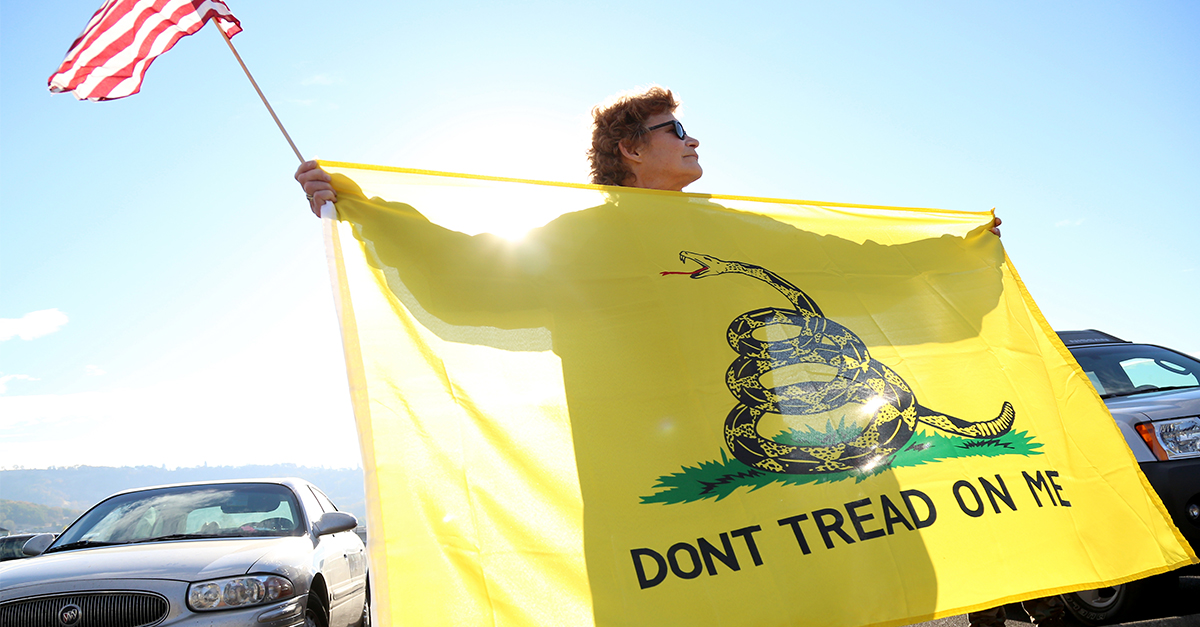