NAACP claims a shooting club’s “kneeling” billboards are racist, but the owner is fighting back 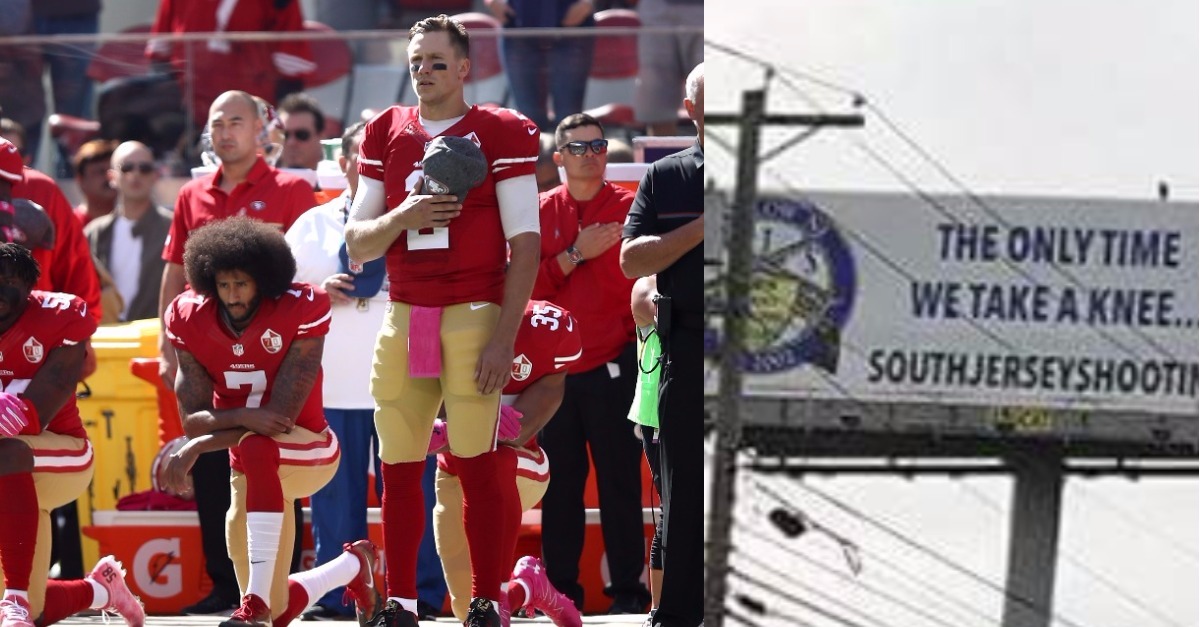 A New Jersey shooting club is under fire amid claims that its billboard depicting a kneeling soldier is racist, but the owner is taking a stand.

“It has absolutely nothing to do with race,” said Wesley Aducat, owner of South Jersey Shooting Club, to The Philadelphia Inquirer. “It’s just support for our veterans.”

The billboards read: “The only time we take a knee…” and features a silhouette of a soldier kneeling while shooting a rifle. The URL of the club’s website is written at the bottom.

The sign’s message appears to be a response to the NFL protests sparked by ex-San Francisco 49er Colin Kaepernick’s 2016 decision to kneel during pregame renditions of the national anthem. Much of the public has been very critical of the continued protests, while participating players argue that they are not trying to disrespect the flag but are simply calling attention to racial injustice and police brutality.

Local activists from the NAACP chapter in Camden, N.J., are calling for protests of the company and demanding that Aducat remove the billboard.

Please call!
This billboard on Rt. 73 in Voorhees. Tell them this billboard is racist. Taking a knee is a protest to say NO to police brutality. The women of SJWPC are taking a knee to support black and brown people.Take it down!The Manager is Carmen Console: 609-704-9500. pic.twitter.com/nCCd8SBUmy

Aducat, however, is putting his foot down. The owner refuses to give in to protests and take down the billboard, saying that while he supports the right to protest, taking a knee is disrespectful to the military, especially since some of the club members are veterans. The shooting club is also affiliated with the NRA and requires all its members to join.

The club’s Facebook page has received several mixed responses to the billboard.

One user shared, “I love your billboards as well. I think we need more of them around our country supporting our troops and service members. You have my support. Keep it up!”

Another posted his plans to tell people to stay away from the range: “I’m recommending all of the new African American Gun Owners that I’ve introduced to gun ownership, self defense and target practice to avoid your facility.”

Another argued that the advertisement is an offensive way to advertise firearms.

I don't care for your ad on Rt. 73. I'm sure there's a way to advertise responsible common sense firearm training and use that's not offensive.