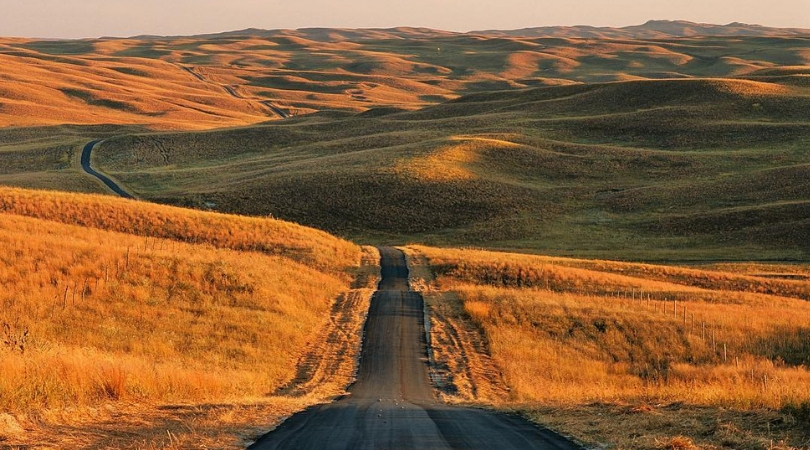 Looking to take some scenic drives this summer? Consider Nebraska. Not what you had in mind? Here, let me change that for you. The Nebraska Sandhills are as awe-inspiring as they are overlooked. They’re a National Natural Landmark that covers a quarter of the state! Reaching from northern to western Nebraska, they range 19,600 square miles. The Nebraska Sandhills are the largest sand dune formation and are considered a National Natural Landmark since 1984.

Initially thought to be “useless” due to the sandy soil inhibiting the land from growing crops, Nebraska’s outback grows in near 100% intact natural habitat. I.e. humans are screwing up this piece of land, as we do. The natural habitat is a curious ecoregion (as detainment by World Wide Fund for Nature). Being part sand dune and other part prairie land/tallgrass, it grows and roams wildly for miles. The height of the dunes in the Sandhills of Nebraska ranges from 1,800 ft in the eastern part to over 3500 feet in western Nebraska.

Sandhills traverse. For many of us, Sundays are a time of reflection and reminisce. This image was made years ago in the golden days of October, where I first fell in love with this mighty kingdom of grass. #nebraska #greatplains #protectprairie #sandhills #gratitude #natgeo @natgeocreative @ilcp_photographers

The Sandhills sits atop the Ogallala Aquifer, which touches eight states. The Ogallala Aquifer is a collection/mixture of water, sand, silt, clay that lies beneath the Great Plains, this makes the Nebraska Sandhills, what they are. However, this is not the only body of water affecting the area. The Middle Loup River and Niobrara River are the bodies of water that drain into the Nebraska Sandhills. According to US Fish and Wildlife Service, this is the most intricate wetland in the United States.

Not unlike many wild areas, animals have made their homes in the Sandhills. Multiple species of fish live in the Niobrara River and Loup River. Shrimp are present in some areas, as well. On land, there are a varied 300 and more species that reside in the semi-arid region. These range from insects such as spiders, mosquitos, dragonflies and many east and west coast birds. For migratory birds, the Sandhills, being centrally located is in the central flyaway, so it isn’t unpopular to see the Sandhill Crane and the likes of the Turkey Vulture.

Morning reflections: A trumpeter swan stretches her wings near its nest in the Nebraska Sandhills. On the prairie, beauty reveals itself in many ways, sometimes it shouts, sometimes it whispers. #plattebasintimelapse #protectprairie #nebraska #greatplains #swans #reflections #remembrance #beauty #gratitude #natgeo @natgeocreative @ilcp_photographers

Where are they located?

If you have never been, this is a natural wonder you have to see at least once in your life. The Sandhills are along the stretch of Grand Island on Highway 2- often referred to as Nebraska Sandhills Journey Scenic Byway. The small town of Broken Bow offers a unique tourist stop with the Custer County Historical Museum, the Arrow Hotel, Kinkaide Brewing Co.

Don’t forget to find the best place to view the stars, because rumor has it, it’s spectacular!