Menu
Follow us
Search
Menu
Search
Real estate developer Donald Trump, left, waits to be announced with his children, from left, Eric, Ivanka, and Donald Jr., during topping off festivities for the 92-story Trump International Hotel and Tower in Chicago, Wednesday, Sept. 24, 2008. Trump, commenting on the economic bailout plan at the news conference said the $700 billion plan is probably necessary because it looks like the economy is "rushing into one big depression." (AP Photo/Charles Rex Arbogast)

Before Trump played the part of Republican nominee, he entertained Stern’s listeners with his opinions on sex, the news and women.

According to Stern, Trump was in many ways a perfect guest.

“I knew I had a guy who loved to talk about sex,” Stern recently said.

“I had a guy who loved to evaluate women on a scale of 1 to 10. These are avenues I went down because I knew it would entertain the audience.”

In a recent report, CNN’s KFile team compiled a collection of interviews that Donald Trump Jr. did that were in a similar vein to his father’s.

Among Trump Jr’s comments were demeaning remarks about beauty pageants and overweight people, along with jokes related to the 2012 movie theater mass murder in Aurora, Colo.

In one appearance during January 2012, Trump Jr. alluded that President Barack Obama was a racist.

“I mean, so many people, you know, they’re just worried about, you can’t say something bad about Obama, not because you actually have a strong stance against his platform, but because that makes you a racist,” Trump Jr. told the radio show, Opie and Anthony.

RELATED: New York passed so Donald Trump’s kids could make the announcement he’s been waiting for

“Like, that in itself is racism. Like, it’s so, you know, it’s so ridiculous and that’s what we’ve become, and he’s played that card very well. And by the way, if I was in his shoes I’d be playing that card too, because you can get away with it in this country, and we allow it.”

In 2015 appearance, Donald Jr. said that people coming to the United States from Mexico were more likely to do bad things.

“He’s not talking about people that are just here doing,” Trump Jr. said of his father who recently made comments where he called Mexican immigrants rapists.

“He’s talking about people, again, there’s a big element coming across and if you speak to people that are on the Texas border — and he said it very clearly — ‘Listen, I’m sure there’s some great people too just trying to do better for themselves. I understand that,.”

“But, you know, there’s a disproportionate amount of people that are bad relative to society coming across and doing the same thing, and we can’t just arbitrarily let everyone in here,” he continued.

In another interview, Trump Jr. stopped himself short when he was about to call singer Dionne Warwick a “bitch.”

Throughout his father’s presidential campaign, Trump Jr. has had to delete several of his old Twitter comments after some found them unsettling.

“Lesson for the night if you look like @mark_mcgrath you too can sexually harass the hell out of anyone. HR rules don’t apply 😉 hahahaha,” Trump Jr. tweeted in 2012.

In September, Trump Jr. drew ire from across the Internet after he tweeted out an image that compared Syrian refugees to Skittles. 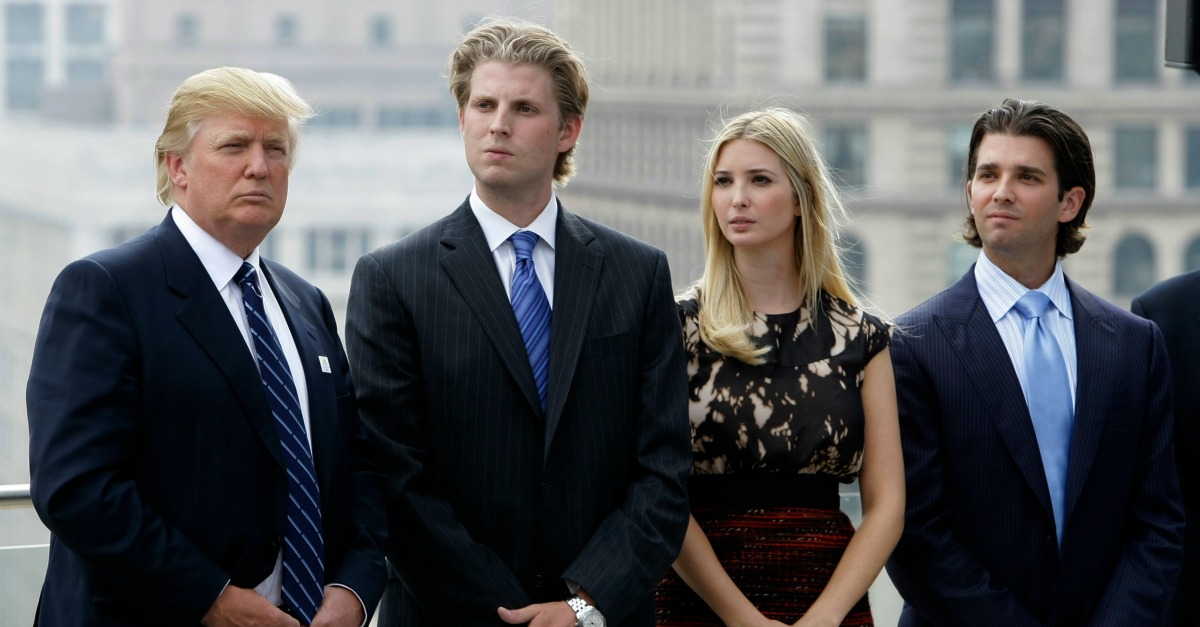