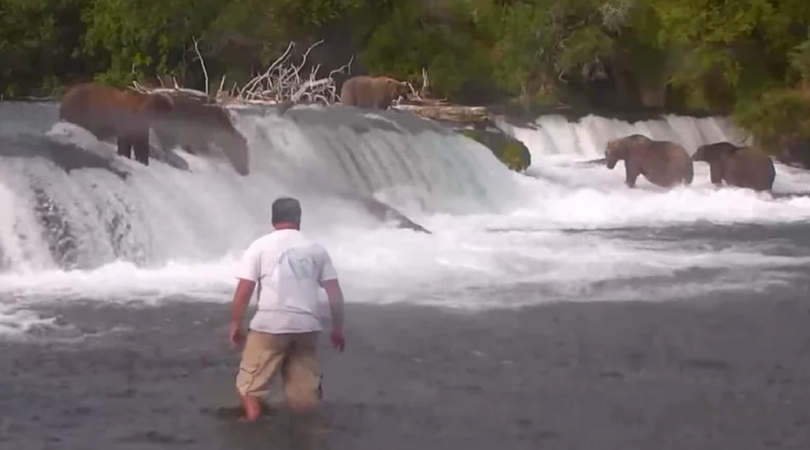 Sometimes I am amazed at the things people will do to get that selfie. Last year, the Conde Nast Traveler stated that selfie-related accidents have actually killed more people worldwide this year than shark attacks have. Yes, 11 people died during selfie accidents, while eight people worldwide were killed in shark attacks. Take for example the 66-year-old Japanese tourist who succumbed serious head injuries, after slipping from the staircase inside the Taj Mahal in Agra. Or the case of a woman at South Jetty Park Beach in Oregon who was standing on a log with friends, falling, and getting pinned under the log, drowning. Yes, safe to say, sometimes people can get a bit out of hand when it comes to taking pictures.

In this case, two Alaskan residents and one tourist are now in trouble with the law, after one member of their group approached a group of feeding bears at the Katmai National Park and Preserve, in a attempts to take a selfie. Surveillance footage from the National Park Service shows a man from the group jumping into the river, walking towards the bear as they are feeding on fish. While the bears remained calm throughout the encounter (thank god, this would have been a totally different story), the video shows the man taking his camera out, take a selfie, walk a bit farther out, squat down, and take one last photo.

Wildlife officials state the group violated the National Park Service wildfire regulations, by putting themselves and wildlife at risk. Immediately after the incident, Katamari rangers stated they received multiple reports from concerns viewers and visitors who observe the violation on the bear cam.  Approaching within 50 yards of a bear using a concentrated food source, like salmon, is prohibited, which is why the group is pending charges as of now. Due to concentrated bear activity at Brook Falls, closures are in place from June 15 through August 15 to allow bare access to essential food resources, allowing them to survive in the winter. These closures help prevent negative bear-human interaction.

Watch: Being Best Friends with a Bear