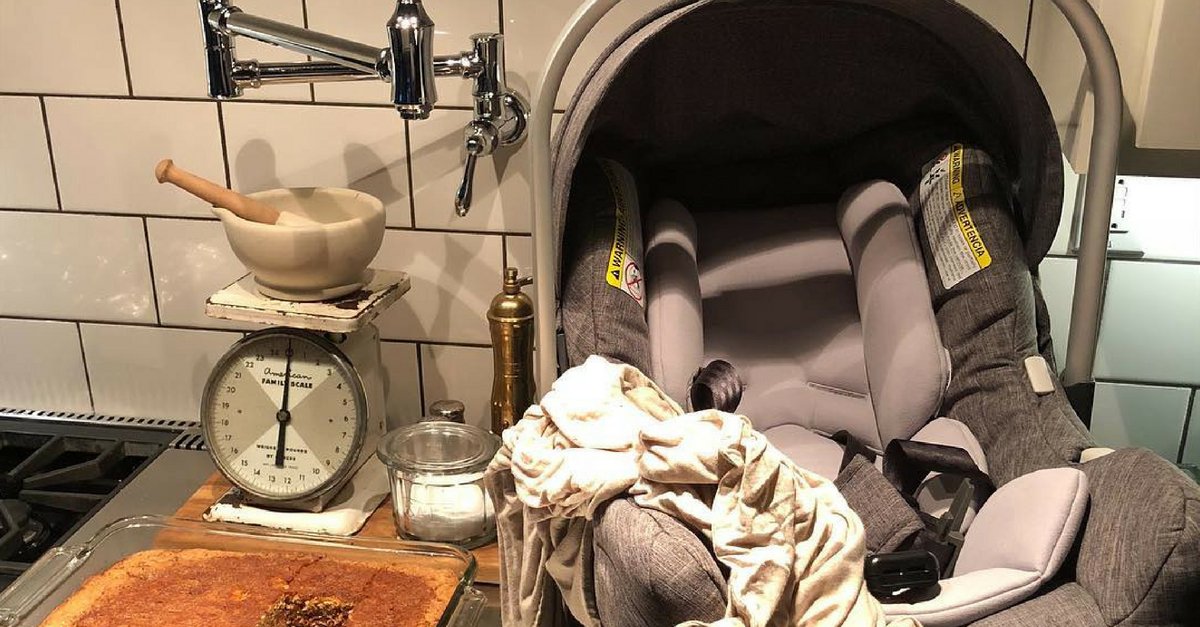 Hello, it’s me reporting from the field of Instagram where Chip Gaines just posted a photo that’s causing some slight controversy. The dad of three boys (Drake, 13; Duke, 10; and Crew, about 2 months) and two girls (Ella, 11; Emmie Kay, 8) has his hands full around their Waco, Texas farm with the arrival of baby Crew Gaines on June 23. As wife Joanna Gaines readies the world for her new design book, the Fixer Upper team has been making waves with the recent snapshots from life on the farm. And y’all, they have been some very adorable photos, including the sweet surprise about Chip’s hospital bracelet tradition.

So back to this new controversial photo from the Fixer Upper star. Can you spot it right away? If you’re Type A, you probably can.

If you’ve read my book #capitalGaines you know I’m NO child safety specialist, but even I know this can’t be a good place for a car seat..

Yes, it’s about how weirdly that cornbread/cake is cut!

In all honesty, I didn’t even blink an eye at the cake on the counter and truly thought he would get more flak for the car seat on the counter. Since he definitely acknowledged how wrong that was in his caption, though, it looks like the world had to nitpick one tiny detail. Do we think it’s cornbread or cake? The lack of icing makes me think it’s cornbread in which case, can I just become a member of the Gaines family?

Quick question, do you like the corners of cornbread or the inside middle without a crispy crust in sight? Because it seems like someone really loves the center of cakes and cornbread in the Gaines household. Could that someone be Chip? Probably. Here’s the detail people can’t seem to stop talking about, apart from their new baby and all the photos Joanna Gaines shares.

Here are some of the comments on his Instagram post, totally calling out HGTV star Chip Gaines for his questionable cake/cornbread eating habits.

I can only speak for myself, but I’m eating anything that comes out of the Gaines’ kitchen, cornbread/cake cut weirdly or not! Many, of course, thought this was all a publicity stunt for social media and who cares if it is! Isn’t it just nice to read something other than terrible news day in and day out?

Now, if you’ll excuse me, I’ll be spending my day taking a poll on how folks cut their cakes, brownies, and cornbread dishes.