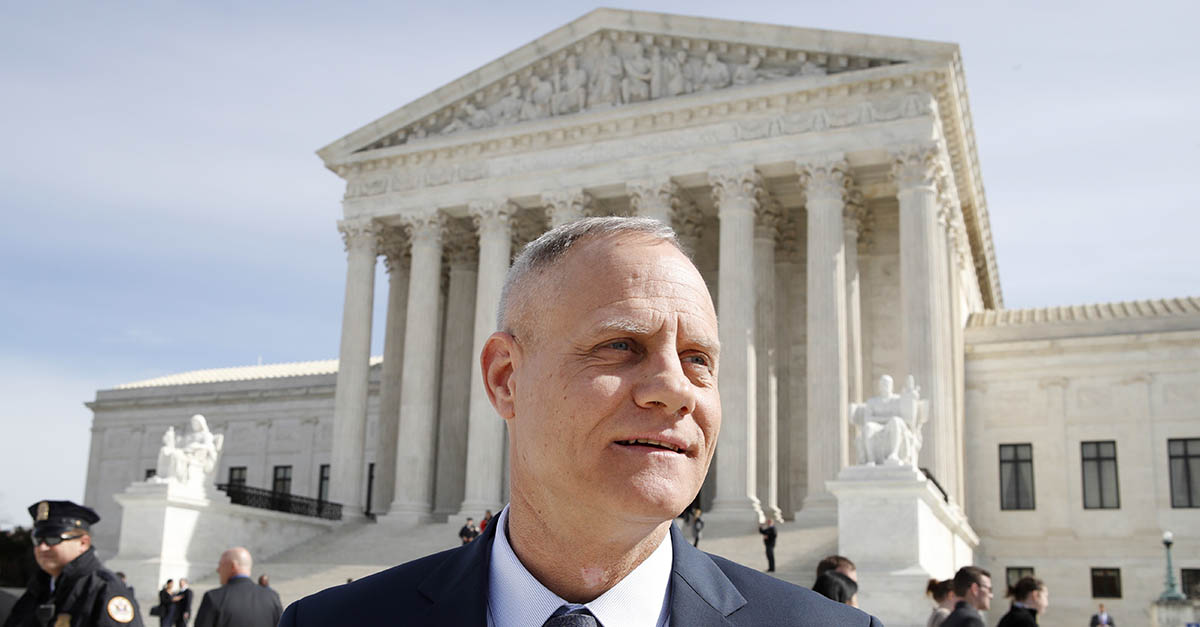 AP Photo/Jacquelyn Martin
Andy Cilek stands outside of the Supreme Court, Wednesday, Feb. 28, 2018, in Washington, where a Minnesota law that bars residents from wearing political clothing at the polls — from Donald Trump's "Make America Great Again" hats to Democratic Party T-shirts and union buttons — is being debated at the Supreme Court. (AP Photo/Jacquelyn Martin)

Should it be illegal to wear a “Make America Great Again” hat or an “I’m With Her” shirt to the polls? The U.S. Supreme Court is considering that question this week.

The case, Minnesota Voters Alliance v. Mansky, is a matter of the First Amendment and free speech versus the freedom to vote without intimidation. It’s also an example of how much “heightened sensitivity” there is around certain issues in a divided America today, said Ilya Shapiro, a senior fellow in constitutional studies at the Libertarian-leaning Cato Institute in Washington, D.C., and editor-in-chief of the “Cato Supreme Court Review.”

“There’s a difference between disrupting someone from voting, or even electioneering, and speech or expression,” he said. “I don’t think there should be electioneering at a polling place.”

In 2010, Andrew Cilek, executive director of the Minnesota Voters Alliance, showed up at his Hennepin County, Minnesota, polling place in a coiled-snake “Don’t Tread on Me” T-shirt — the unofficial logo of the Tea Party — and a “Please ID me” button, even though his state does not have a voter ID law.

He was temporarily prevented from voting, though he was eventually allowed to cast a ballot. Poll workers asked Cilek and others to cover up their slogans. An election official took down his name to possibly prosecute him for electioneering inside a polling place, which is punishable by up to a $5,000 fine, though no action was taken. It ended up being Cilek who filed a lawsuit instead. He and the Minnesota Voters Alliance are being represented by a big-time conservative legal advocacy group, but they also have the backing of the American Civil Liberties Union and libertarian groups.

A lower court upheld the law used against Cilek’s T-shirt as protecting Minnesota’s legitimate interest in polling place “peace, order and decorum” and “the integrity of its election process.” The state is arguing its law is necessary to keep order at polling places at a time of intense political polarization and deepening divisions.

Voter intimidation is prohibited by law in most states — including Minnesota — and a federal law that says “no person … shall intimidate, threaten, coerce … any other person for the purpose of interfering with the right of [that] person to vote or to vote as he may choose.” All 50 states have “speech-free zones” around polling places on Election Day. But Minnesota law also bans voters from coming to the polls wearing political badges, buttons or other insignias intended to “influence and impact” voting. It’s one of only 10 states with such a law; the others are Delaware, Kansas, Montana, New Jersey, New York, Tennessee, Texas, Vermont and South Carolina.

This is not the first time the highest court in the land has taken a look at the intersection of free speech and voting. In 1992, SCOTUS said it was not a First Amendment infringement to create a “safe zone” around polling sites, because it was intended to protect citizens’ rights to vote freely. The Burson v. Freeman decision also said Tennessee’s 100-foot safe zone was small enough to be acceptable.

But that case was more about political signs and posters than personal apparel, Shapiro said. The current case, and what the justices discussed Wednesday, was more about free speech and where to draw the line between what is and is not political speech. Justices spent more time quizzing lawyers about what would and would not be allowed — Is a #MeToo shirt political? What about a “Parkland Strong” shirt?, asked Justice Samuel Alito — than pulling up precedents or debating dry legal topics.

It made for “illuminating” arguments, said Shapiro, who thinks the challengers will prevail, and SCOTUS will strike down the Minnesota law in a decisive vote.

“It’s a weird law that’s seldom enforced,” he said. “A ruling for the challenger striking down the law isn’t going to change very much, in that intimidation and deception and deceit are still going to be illegal. But nobody is going to be turned away because they are wearing the wrong shirt.”

RARE POV: South Carolina’s proposed ban on saggy pants is not only ridiculous, but an open invitation for police abuse