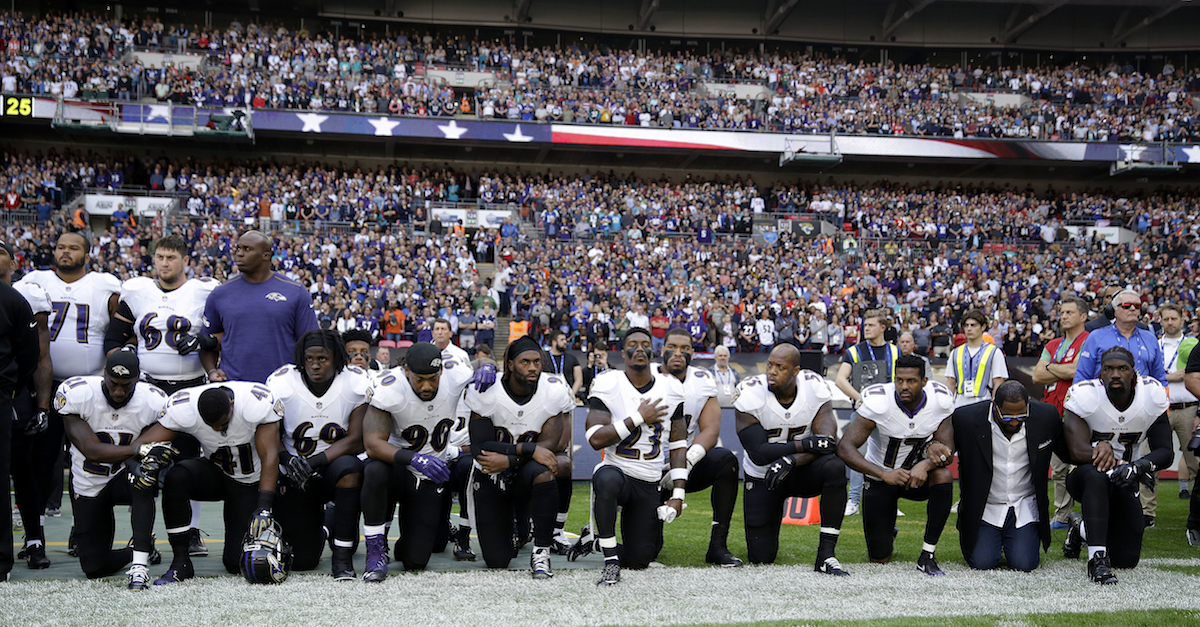 (AP Photo/Matt Dunham)
Baltimore Ravens players, including former player Ray Lewis, second from right, kneel down during the playing of the U.S. national anthem before an NFL football game against the Jacksonville Jaguars at Wembley Stadium in London, Sunday Sept. 24, 2017. (AP Photo/Matt Dunham)

The director of the Michigan State Police will lose five days of pay for sharing a Facebook post that called NFL players who kneel during the national anthem “anti-American degenerates,” Gov. Rick Snyder said Thursday.

The penalty was disclosed in the second of two statements released by Snyder, who also announced a strategy to “review the culture of state government.”

Col. Kriste Kibbey Etue has been under fire since Sept. 24 when she shared a meme on her personal Facebook page that called NFL players who kneel during the national anthem “millionaire ingrates who hate America and disrespect” soldiers and veterans.

She has apologized, especially to black lawmakers, but hasn’t publicly explained why she shared it.

Snyder had already said he wasn’t going to fire Etue, who is white. She makes $165,000 a year, so she’ll lose just under 2 percent of her pay. Etue must still work during the five days.

“Colonel Etue posted something on social media that was inappropriate. … The colonel has served honorably as an enlisted trooper for 30 years, and I hope we can come together as Michiganders to move forward and find common ground, rather than rehash past mistakes,” the Republican governor said.

The Facebook post came at a sensitive time for state police. The department said it would stop high-speed pursuits in Detroit, except in cases of serious crime, after a white trooper who was inside his patrol car shot a black teenager with a Taser. The boy crashed an all-terrain vehicle and died. The trooper has resigned and is the subject of a criminal investigation.

In his statement Thursday, Snyder said he’s ordered a review of trooper recruit practices and the standards for admission. He also said his administration will develop “cultural awareness and sensitivity training guidelines” within all state government.

The governor said a group will recommend policies on the private use of social media by state employees.

“We are the best Michigan when we are a diverse Michigan, and I will continue taking actions to ensure all state departments are working to effectively serve all residents in an impartial and inclusive manner,” Snyder said.

Democratic Sen. Vincent Gregory, who met with Etue and had wanted her to resign, told the Detroit Free Press that Snyder was taking the right steps by addressing cultural issues in government.