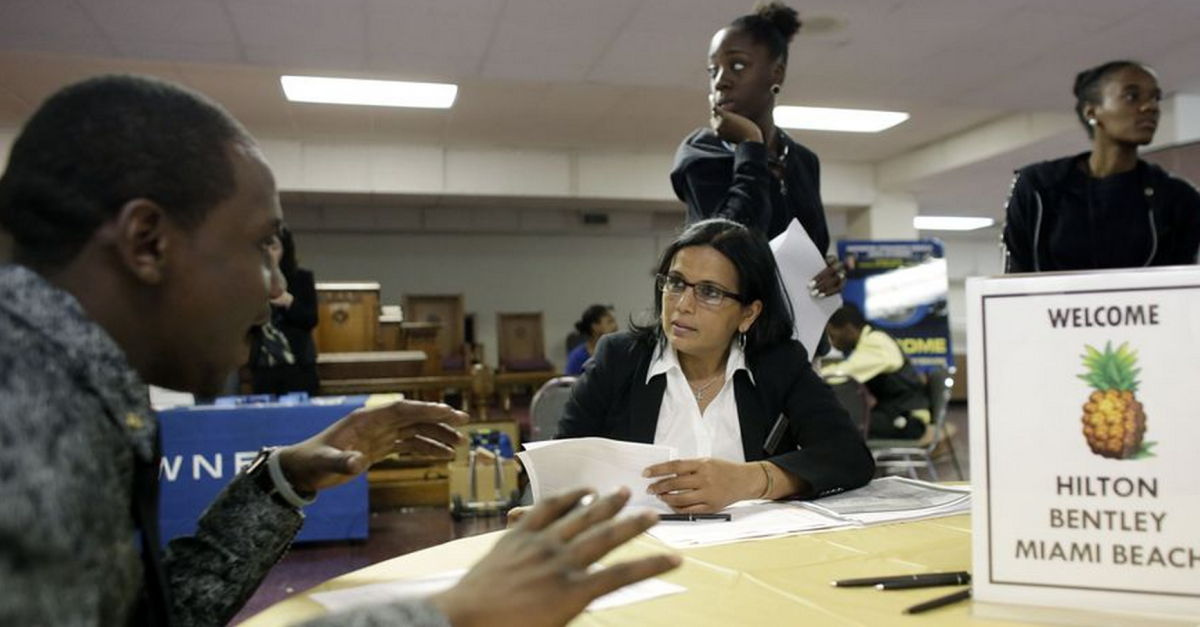 WASHINGTON — The job market remains a frustrating place for America’s 9 million unemployed — perhaps more so as hiring has accelerated along with job postings.

The pace of job growth over the past three months was the fastest in 17 years. The gains spanned nearly every industry, and some employers have finally had to dangle higher pay to attract or retain top talent.

And yet millions of job seekers still can’t find work. Some businesses remain slow to fill their openings, awaiting the ideal candidate. Many job seekers lack the skills employers require.

The January jobs report that the government issued Friday pointed to another factor, too: As hiring strengthens, more people typically start looking for jobs. As the number of job seekers grows, so does competition for work.

The number of openings has reached nearly 5 million, the most since 2001. Yet that’s barely more than half the number of people the government counts as unemployed.

For many, the transition can be maddeningly slow. Complaints abound about online job sites that seem to function more as black holes than as gateways to employment. Applicants can’t get past online portals to explain gaps in their resumes. Multiple interviews and other steps — even for low-paying jobs — can prolong the process.

Carlie Kozlowich, 23, had three interviews last year with a marketing company for a job she was told would involve “travel” and “events.” Only after accepting the job did she learn it involved selling goods at a booth in a Costco. Having amassed roughly $50,000 in debt to earn a college degree, she felt she had to turn it down.

“Three interviews just to say, ‘Would you like to try a pierogi today?'” she said.

Steven Davis, an economist at the University of Chicago, calculates that it took employers an average of 25.6 working days to fill a job in November, the latest period for which data are available. That nearly matched July’s figure of 26, the longest in the 14 years that the government has gathered the data Davis uses.

An extended hiring period can in some ways be a positive sign: It suggests that companies are having a harder time finding workers because the economy has strengthened. The number of unemployed peaked at 15.4 million in October 2009, just after the recession ended.

Still, the fact that it takes companies so long to fill vacancies, even with 9 million people unemployed, suggests that more discouraging factors may be at play.

Some companies that are seeking high-skilled workers in fields like information technology and advanced manufacturing complain about a shortage of qualified candidates. Some recruiters and online job sites describe “skills mismatches.”

Jobs in management, computers and math and architecture and engineering far outnumber job seekers in those fields, according to Indeed’s data.

That doesn’t sit well with Bill Gahan, 51, who has sought work for nearly a year after moving to Salt Lake City. Gahan worked in manufacturing and logistics for 29 years, including as a vice president for logistics at a manufacturer of hardware and software for visually impaired people.

Told that some experts think many of the unemployed lack the right skills, Gahan says, “I want to have a conversation with whoever is saying that.”

Increasingly, many economists agree with Gahan. Though skill shortages exist in some highly technical positions, if shortages of qualified workers were pervasive, employers would likely offer higher pay. Despite a sharp gain in January, average pay still hasn’t risen much.

Many employers also remain highly selective, perhaps assuming there are still legions of unemployed to choose from. They may be right: There are 6.8 million part-time workers who would prefer full-time jobs — 50 percent more than in 2007, before the recession began.

The recession also left some companies reluctant to make permanent hires. They have turned instead to temporary and contract workers.

All that has left job seekers like Stephen Jones in a bind. A lawyer, Jones hasn’t found work since moving to Windermere, Florida, more than a year ago. Besides applying for positions as a lawyer, Jones has lowered his sights and sought legal assistant and paralegal jobs. Having sent out 200-300 resumes, he’s heard back once or twice.

Many companies that want to hire don’t see the hurry.

Explorys, a health care data provider in Cleveland, plans to add 80 people to its 142-person staff this year, mostly in data analysis. The company uses a database to help hospitals manage and anticipate patients’ needs.

Cleveland is home to several major health care employers and research universities, so Explorys typically has “lots of good candidates” for jobs, says CEO Steve McHale, and tries to identify those who fit its culture and values.

“We probably say ‘no’ more than other companies,” he said.

Geography can pose a hurdle for some companies that want to hire.

Digi-Key, an online seller of electrical components, added 521 jobs last year as sales grew, raising its workforce to 3,300. Yet it’s located in Thief River Falls, Minnesota, a town of 8,500 an hour from the Canadian border.

It has offered relocation bonuses and arranged bus service to nearby cities to find applicants. But Rick Trontvet, vice president for human resources, worries that those measures won’t be enough as the company grows.

“We have so many jobs and so few people to fill them,” Trontvet says.