Instead of Waitress Job, Teen Received This Unprofessional, Rude Text 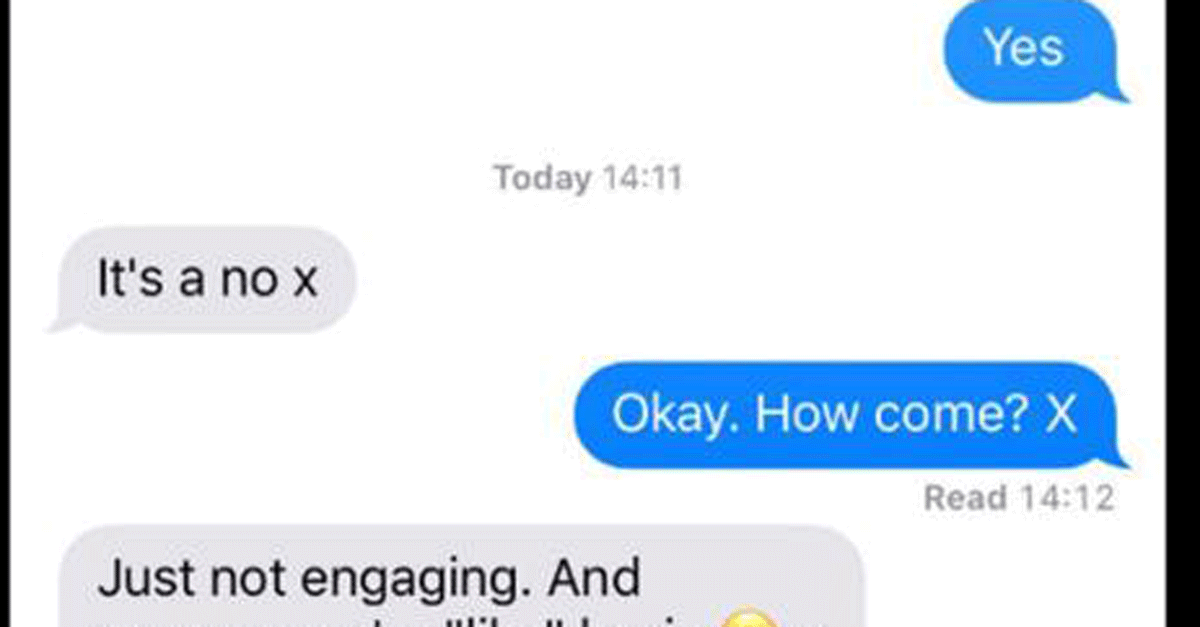 [dropcap]P[/dropcap]eople breakup via text all the time. Is it right? Sometimes. Is it wrong? Again, sometimes. We “call” in sick via text, and we cancel plans with a few taps of the thumb. Texting is a form of communication that, like it or not, isn’t going away any time soon. That being said, certain situations call for more decorum than a simple text reading “It’s a no.”

Looking for a prime example? Try the hiring process.

One 18-year-old named Megan Dixon recently fell victim to denial-by-text. Here’s how it went down:

While Dixon’s corresponding tweet handles the whole scenario well, she wasn’t thrilled with how this all played out. “At the end of the interview, I asked when I would hear back. She told me it was never more than a few days and she had my email. But I got the texts a few seconds after leaving,” Dixon told The Sun.

“I was shocked,” she continued. “The least she should have given me was some proper feedback. And the laughing face emoji was so unprofessional. It was a really bitchy thing to do.”

The “bitchy” culprit, one Shantel Wesson, represented the steakhouse chain Miller and Carter.

The Sun says, “Another message to her implied the mocking one was sent by mistake. Shantel refused to comment but a Miller and Carter spokeswoman said: ‘We can?t apologise enough to Megan. It was never our intention to be disrespectful or upset her in any way. The texts were sent in error and were intended for our manager, not the candidate.'”

The question that begs an answer is is that enough? Further, can Miller and Carter walk away from this one unscathed? Intentions aren’t a screenshot of actual texts, tweeted out to the masses.

Intentions don’t exist in a court of law (we think we’re not lawyers). Was this move all-around unforgivable, or was it an honest mistake? We’ll let you be the judge.