After calling off the search, the U.S. Navy has identified three sailors who tragically lost their lives 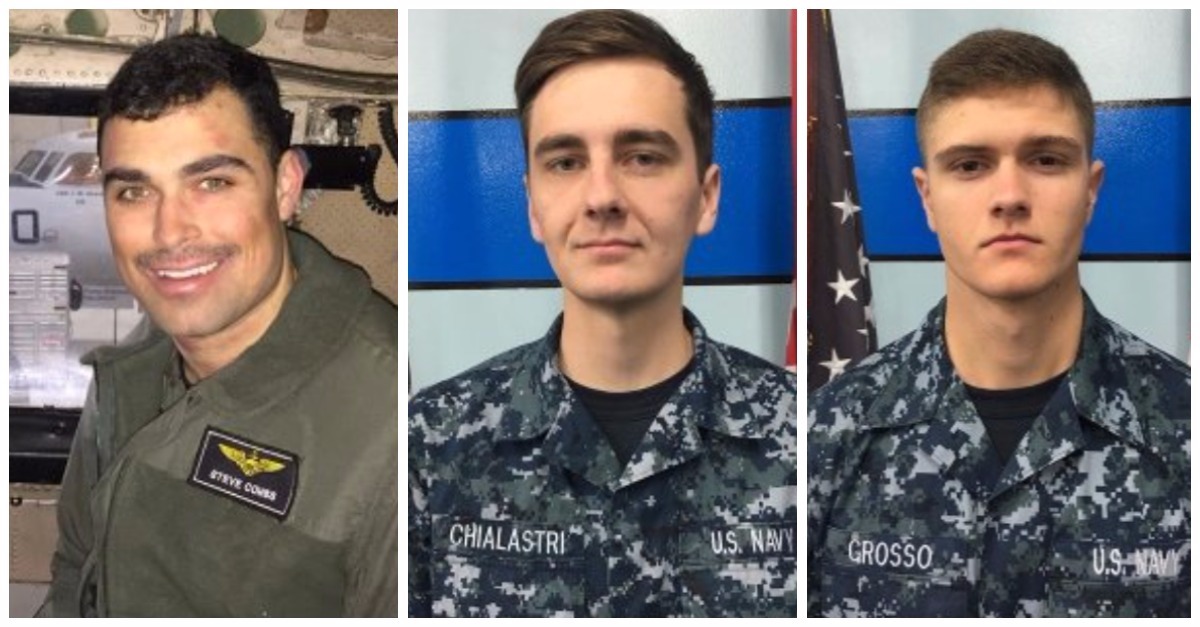 The U.S. Navy identified by name and photograph Saturday the three sailors who went missing last Wednesday after a plane crash in the Pacific Ocean.

The C-2 “Greyhound” aircraft carrying 11 crashed while en route to the USS Ronald Reagan. While eight of the passengers were rescued, three were still unaccounted for.

A massive search for the sailors followed. That search was called off on Thursday, the Seventh Fleet announced.

#BREAKING The Navy has released the names of three sailors missing after a transport plane crashed earlier this week in the Philippine Sea.

Posted by Stars and Stripes on Saturday, November 25, 2017

Their ages have not yet been disclosed. Combs and Grosso were from Florida, while Chialastri was from Louisiana.

8 personnel recovered following C2-A crash have been transferred to #USSRonaldReagan for medical evaluation and are in good condition. Search and rescue efforts for three personnel continue with @USNavy and #JMSDF ships and aircraft on scene. https://t.co/uuIWd9SUSF pic.twitter.com/rvFC81Qbqq

“Our thoughts and prayers are with the families of these Sailors,” Vice Adm. Phil Sawyer said. “Their service and sacrifice will be lasting in Seventh Fleet, and we will continue to stand the watch for them, as they did bravely for all of us.”

“The thoughts and prayers of the entire team onboard Ronald Reagan go out to the families and friends of our fallen shipmates,” Capt. Michael Wosje added. “We are thankful for our professional search and rescue teams and their incredible bravery. The entire Navy team is working together to investigate the cause of this mishap, and we will remain focused on our mission to operate forward in a safe and professional manner to ensure peace and stability in the Indo-Asia-Pacific region.”

The Navy’s Japan-based Seventh Fleet said Wednesday in a statement that a search and rescue operation was launched from the USS Ronald Reagan carrier.

The plane was taking part in an ongoing joint U.S.-Japan naval exercise in waters surrounding Okinawa from Nov. 16-26. The Navy called it the “premier training event” between the two navies, designed to increase defensive readiness and interoperability in air and sea operations.

In June, the Seventh Fleet notified families of the seven sailors who drowned after a 29,060-ton container ship called the ACX Crystal collided with the USS Fitzgerald.

"We are all deeply saddened by the tragic loss of our fellow shipmates … as details emerge, we can all be proud of the…

Divers found the missing sailors after they were able to gain access to parts of the USS Fitzgerald that were damaged in the collision.

The remains of all 10 USS John McCain Sailors have been recovered. May they all rest in peace. Salute x 10 to our fallen heroes. pic.twitter.com/uIvlmBNA7l

The Navy dismissed three-star commander of the U.S. Seventh Fleet Vice Adm. Joseph Aucoin in August after “los[ing] confidence in his ability to command.”

The prior ship collisions were deemed avoidable, widespread failures by the crews and commanders, who didn’t quickly recognize and respond to unfolding emergencies. A Navy report recommended numerous changes to address the problems, ranging from improved training to increasing sleep and stress management for sailors.