A man whose identity authorities are still working to discover was caught on camera at an Alabama gas station attempting to withdraw cash from an ATM using a card that he stole.

When he attempted to withdraw more cash than was in the account, all the while seeming suspicious to employees, he left. But as he was leaving the gas station, the trunk of his black Nissan Altima popped open and a woman jumped out and ran for her life.

According to AL.com, the 25-year-old woman was abducted at gunpoint from her apartment in Avondale. The suspect demanded money.

She said she didn’t have any and was forced into the man’s trunk. She also said he took her cell phone and wallet.

RELATED: Watch a surprised cop take control when a wanted man pops out of the trunk of a car

We can surmise that he took the woman’s debit card out of her wallet and attempted to withdraw money from her account at the ATM.

When he couldn’t get the amount of money he sought, he attempted to cut his losses — that is, if the popping the trunk was intentional. But the surveillance camera tells the story.

The owner of the the owner of Gas Land station Yosef Alsabah said there was clearly something “not right” and that it looked like he was armed.

“He was not right […] there was something going on with him,” he said. “He looked like he had a pistol in his pocket — I kept an eye on him.”

He said the man became increasingly frustrated when he couldn’t get the money.

What was “not right” became frighteningly obvious moments later.

The victim jumped out of the trunk of the moving car and ran for her life.

“I got her inside and locked the door, then called the police,” Alsabah said. The gas station owner said the woman told him she was driven to multiple ATMs where her kidnapper withdrew cash.

RELATED: Oh, deer: man hits Bambi and gets a hell of surprise when he opens his trunk

Birmingham Police have released this photo of the kidnapper and are working to track him down. 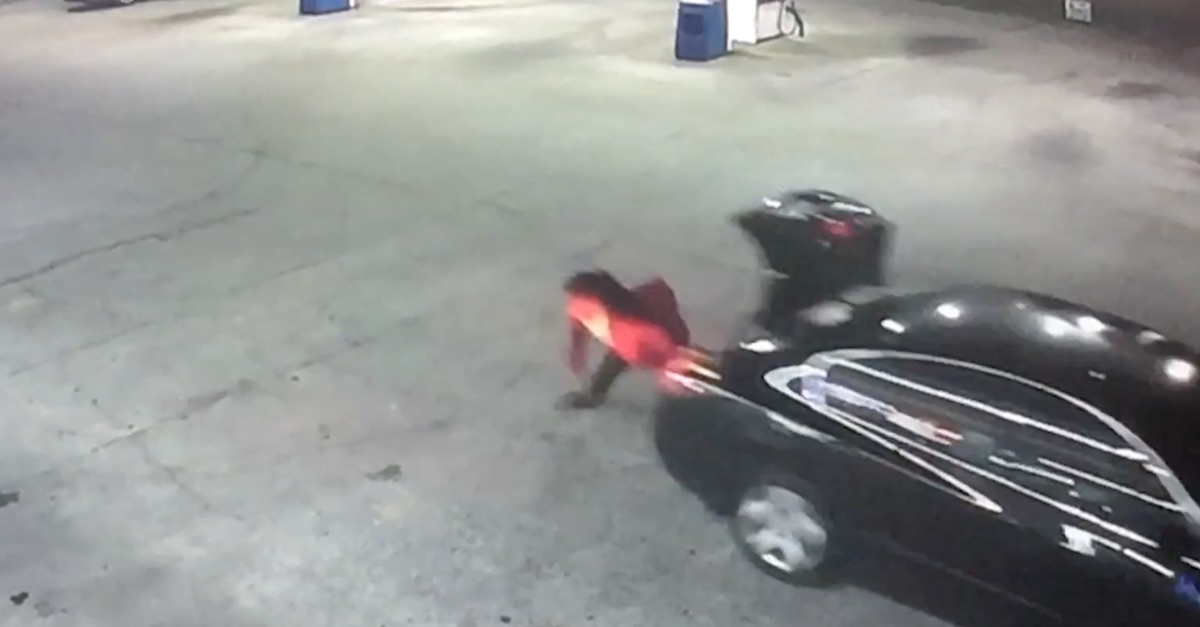