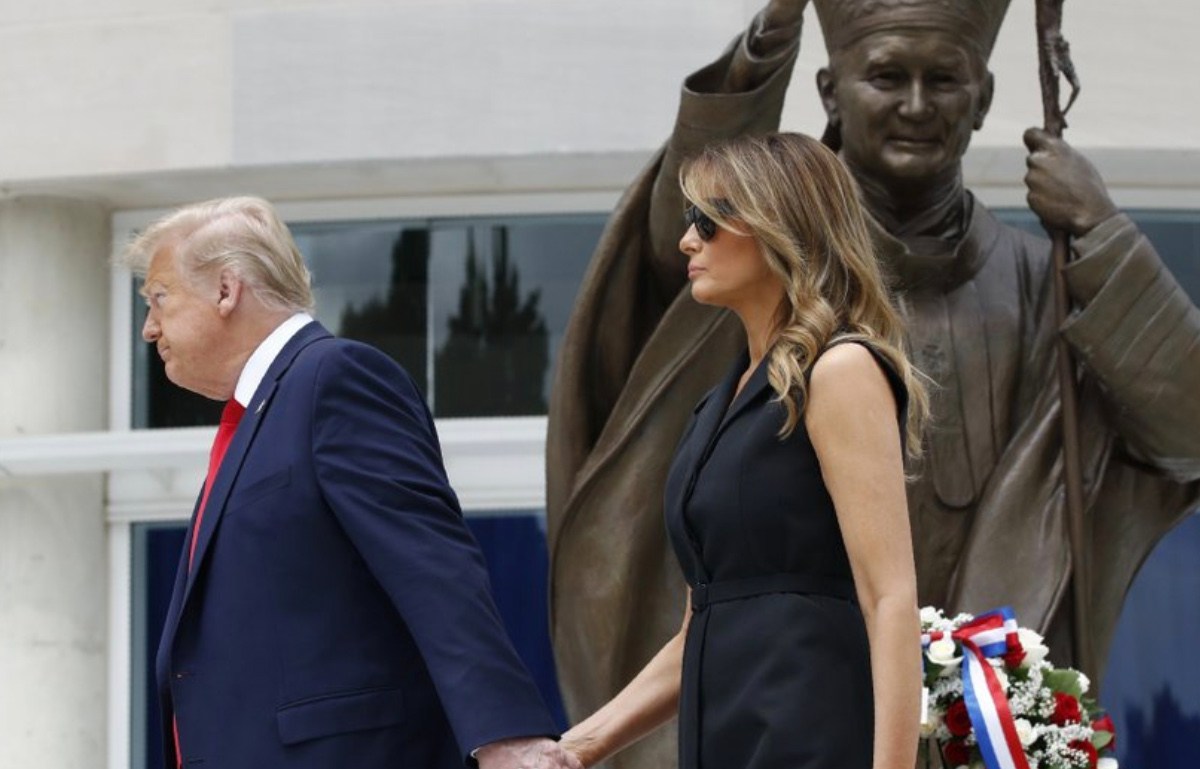 Cloaking himself in religion for the second day in a row, President Donald Trump sought to seize the moral authority to justify his hard line against demonstrators protesting the killing of another black man in police custody and at the same time mobilize his religious conservative base.

Trump signed an executive order on international religious freedom on Tuesday and traveled to the Saint John Paul II National Shrine, where he and the first lady laid a ceremonial wreath and observed “a moment of remembrance.”

A day earlier, he had held up a Bible and posed for photos in front of a historic church across from the White House that had suffered fire damage from protesters. He strode through Lafayette Park to the church after authorities forcefully broke up peaceful protests there.

Trump’s religious outreach marked his latest efforts in a series of overtures to mobilize conservative voters of faith, particularly the white evangelical Christians who are among his most loyal supporters. The furious, politically charged response to his gestures from less pro-Trump faith leaders, however, suggested his efforts to lock in one part of his base could backfire by turning off other religious voters.

Tuesday’s shrine visit was originally set as a venue for Trump to sign the religious freedom order, which he ended up signing during a private event in the Oval Office. But his tweets made clear what was on his mind as he spent much of the morning urging Republicans to vote in primaries on Tuesday that he vowed would “lead to big victories on November 3rd.”

Trump has turned to religion as he seeks to project strength and quell violent protests that have spread across the nation in response to the killing of George Floyd in Minneapolis. But religious leaders across denominations accused Trump of trying to coopt religion in an attempt to project leadership at a time of deep national strife.

The Rev. Mariann Budde, bishop of the Episcopal Diocese of Washington, said that she was “outraged” by Trump’s Monday visit to St. John’s Church and noted that Trump didn’t pray while visiting the landmark, which has been visited by sitting presidents since the early 19th century. The church sustained minor fire damage during protests Sunday night.

The Rev. Gini Gerbasi, the rector at a church in Washington’s Georgetown neighborhood, said she was “deeply shaken” after having been forcefully cleared from the Lafayette Square area Monday evening. She urged Trump to live by the Bible’s words “instead of carrying them around as a prop.”

The use of “weapons of war” to help the president “show his supporters that he’s religious,” Gerbasi told The Associated Press, defied further comment. “I can’t even go there. The layers of irony and hypocrisy and sacrilege are already thick.”

As for Tuesday’s trip to the Catholic shrine, Archbishop Wilton Gregory of Washington’s Catholic diocese said he found it “baffling and reprehensible that any Catholic facility would allow itself to be so egregiously misused and manipulated.”

Trump on Wednesday morning brushed off the critics, insisting that his visit had been well-received.
“Most religious leaders loved it,” Trump said during an interview on Fox News Radio’s “The Brian Kilmeade Show,” adding, “It’s only the other side that didn’t like it.”

White House counselor Kellyanne Conway on Tuesday defended Trump’s visit to St. John’s as a powerful symbol to those who set the church ablaze, telling Fox News Channel, “We don’t look into other people’s hearts and souls and discern and judge what their faith is, why the president felt compelled to walk there, why he held that Bible up.”

Trump’s campaign framed his visit to St. John’s as “a powerful statement that God will always prevail by standing before the burned church, Bible in hand,” in the words of spokeswoman Sarah Matthews.

Budde challenged that narrative as she aligned with the goals of peaceful protesters, saying in an interview that “if the president was trying to capitalize on religious outrage because the church was burned, I think the real outrage was the death of George Floyd.”

Family Research Council President Tony Perkins, a Christian conservative ally of the president, lauded Trump’s visit for “sending a message that he’s not going to be intimidated, that our government is not in hiding.”

Perkins said the only thing he would have done differently, had he been shepherding the church visit, would be to ask a multiracial group of pastors to offer prayer for the nation during the crisis.

The Rev. Samuel Rodriguez, a Latino evangelical pastor who has advised Trump, said any president holding up the Bible is a “powerful image.” Rodriguez dismissed the idea that Trump’s recent forays into religious symbolism were “a dog whistle or a clarion call” to a religious base that, as he put it, is already firmly by the president’s side.

“Is he somehow shaky with the white evangelical community?” Rodriguez said of Trump.

But just months before November’s presidential election, polls show Trump struggling in key swing states, with some evidence of waning enthusiasm among some of his most loyal supporters, including white evangelical Christians.

Polling from the public Religion Research Institute, a nonpartisan nonprofit, found a double-digit decline in Trump’s support among white evangelicals and Catholics from March to April, a sign that Trump could be struggling to consolidate his appeal with a demographic he desperately needs to win.

Robert P. Jones, CEO of the institute, also cited data showing white evangelical voters are shrinking as a share of the U.S. population, meaning Trump “needs to overperform” among his core religious supporters to win in November.

About the author: Jill Colvin
Jill Colvin is a reporter with the Associated Press.
View More Articles

About the author: Elana Schor
Elana Schor is a reporter with the Associated Press.
View More Articles