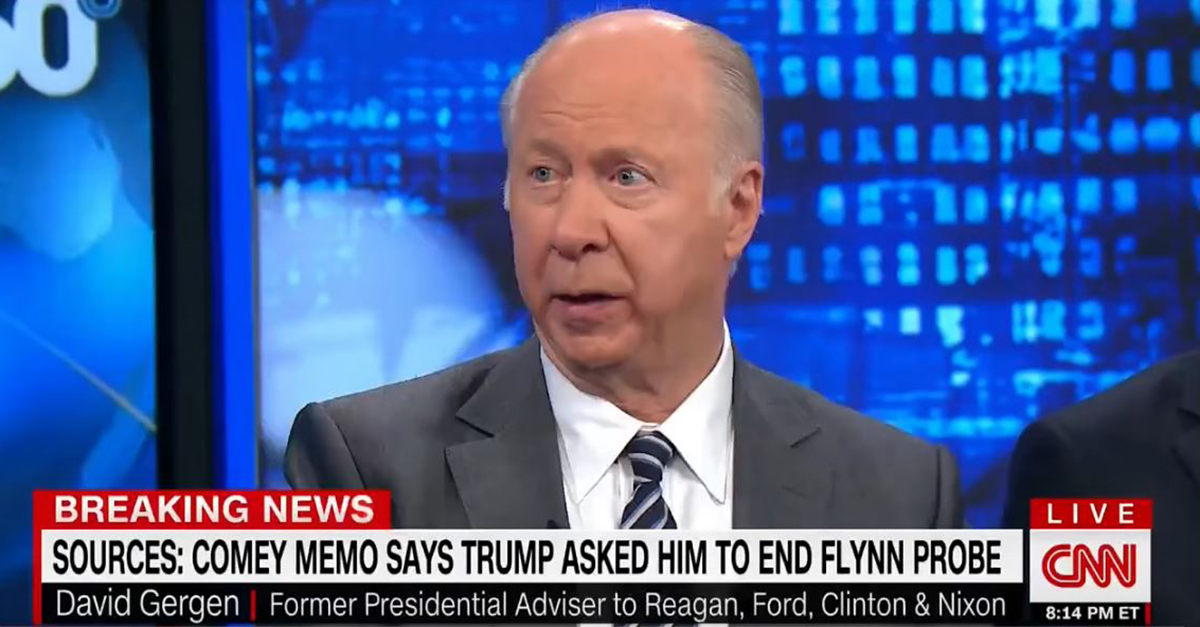 The bombshell reports keep coming and now the charge of “obstruction of justice” is being uttered by more and more reporters, analysts and politicians regarding President Trump’s actions toward former FBI director James Comey and the Russia investigation.

Tuesday night on CNN’s “Anderson Cooper 360,” veteran political analyst David Gergen became the latest to suggest the New York Times’ report that Trump asked Comey to drop the investigation into former national security adviser Mike Flynn represented obstruction of justice, and if so, impeachment is now legitimately on the table.

RELATED: For the sake of the country, Donald Trump better get his act together

“After watching the Clinton impeachment, I thought I would never see another one,” Gergen told Cooper. “But I think we’re in impeachment territory for the first time.”

And when James Comey didn’t go along with him, wasn’t his boy, he fired him, which I think is also relevant to the question of what he was trying to do. So from my point of view, this is of enormous consequence for his presidency. I think if you look at the three bombshells we’ve had, the Comey firing last week, then the sharing of this highly classified information with the Russians, of all people, and now telling Comey to drop the case, what we see is a presidency that’s starting to come apart.

Gergen, who was a former presidential adviser to four presidents both Republican and Democrat, is considered one of CNN’s more moderate panelists. Two of the presidents Gergen served — President Richard Nixon and President Bill Clinton — faced impeachment processes during their administrations. From Gergen’s perspective, it seems that Trump was trying to impede the FBI’s ability to thoroughly conduct an investigation.