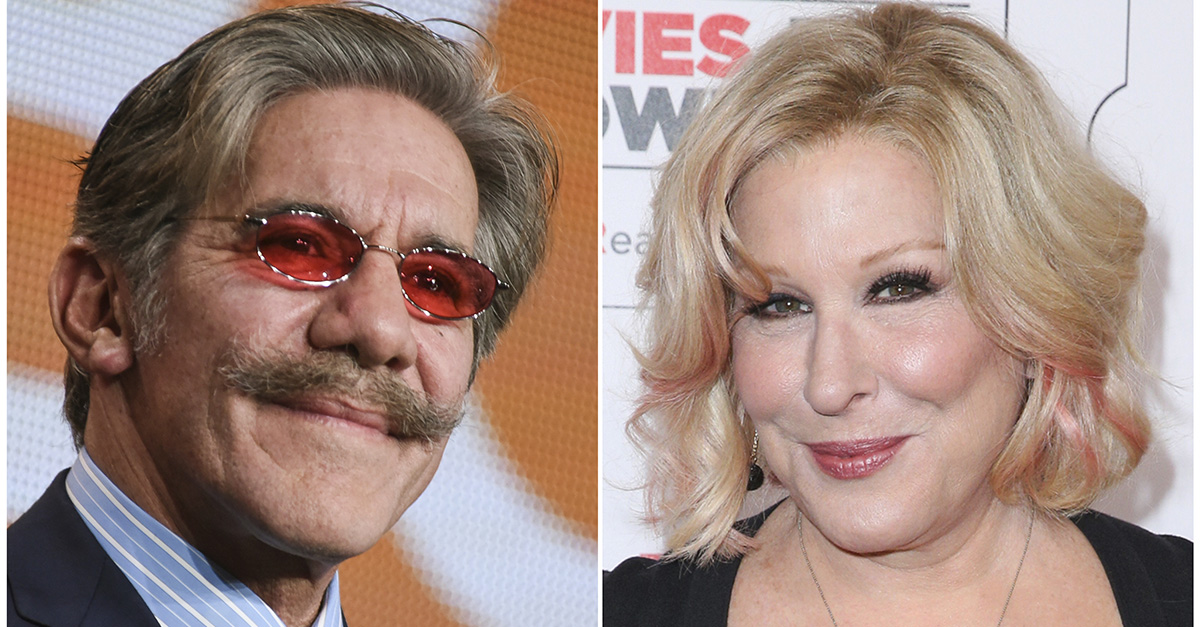 Left: Photo by Richard Shotwell; Right: Rich Fury/Invision/AP
This combination photo shows Geraldo Rivera at "The Celebrity Apprentice" panel at the NBC 2015 Winter TCA in Pasadena, Calif., on Jan. 16, 2015, left, and Bette Midler at the 15th Annual Movies for Grownups Awards in Beverly Hills, Calif., on Feb. 8, 2016. Midler is renewing an allegation of sexual misconduct against Geraldo Rivera, a day after Rivera called the news business "flirty." In a tweet posted Thursday by Midler and confirmed by her publicist, the actress-singer called on Rivera to apologize for an assault she said occurred four decades ago. (Photo by Richard Shotwell, left, and Rich Fury/Invision/AP, File)

Geraldo Rivera’s apology tour continues as he recently responded to allegations against him made by Bette Midler.

The actress reportedly alleged that the TV host groped her during an encounter in the 1970s. Rivera took to Twitter with an apology to Midler and others who he may have hurt with the release of his 1991 book “Exposing Myself.”

“27 years ago I wrote a tawdry book depicting consensual events in 1973-45 years ago-I?ve deeply regretted its distasteful & disrespectful tone & have refrained from speaking about it. I?m embarrassed & profoundly sorry to those mentioned-I have & again apologize to anyone offended,” he wrote in one tweet.

RELATED: Things got awkward between Geraldo Rivera and his Fox News colleagues after they couldn?t agree

Rivera quickly followed up with a second tweet directed specifically to Midler. “Although I recall the time @BetteMidler has alluded to much differently than she, that does not change the fact that she has a right to speak out & demand an apology from me, for in the very least, [publicly] embarrassing her all those years ago. Bette, I apologize.”

Midler outed Rivera on Nov. 30 by sharing a 1991 video of an interview with Barbara Walters with fans on Twitter.

“This was when he was very… sort of hot and he and his producer left the crew in the other room, they pushed me into my bathroom, they broke two poppers and pushed them under my nose and proceeded to grope me,” Midler said in the video and Walters responded, “groped?”

Midler continued, “Groped me. I did not offer myself up on the altar of Geraldo Rivera. He was unseemly. His behavior was unseemly.?

The actress told fans that she decided to share the video after Rivera defended shamed former “TODAY” anchor Matt Lauer following news of his firing. Rivera later apologized for the tweets which promoted Midler to share her #metoo story.

?Tomorrow is my birthday. I feel like this video was a gift from the universe to me. Geraldo may have apologized for his tweets supporting Matt Lauer, but he has yet to apologize for this,” she wrote on Thursday.