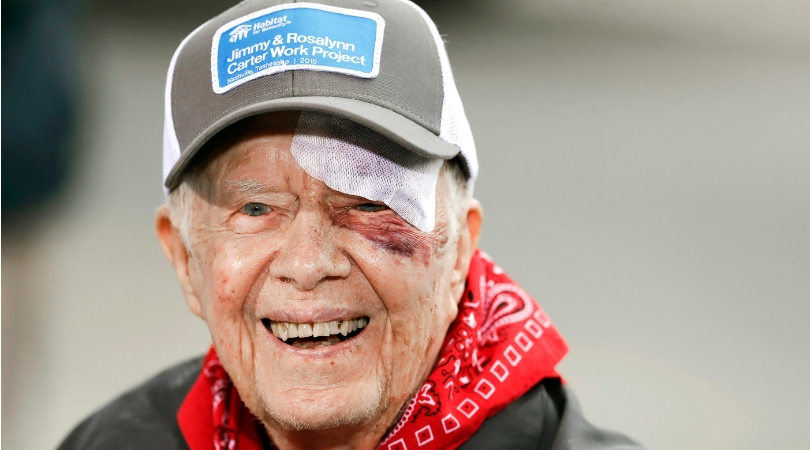 It looks like Former President Jimmy Carter is having quite a rocky month. Carter was hospitalized once more after falling at his home in Plains, Georgia. Deanna Congileo, Director of Communications for the Carter Center, released a statement saying that despite the second fall, the former President is in good spirits and is looking forward to recovering in his own home.

He was admitted to Phoebe Sumter Medical Center for observation and treatment after suffering a minor pelvic fracture. Carter, who is 95-year-old, also fell at his home earlier this month where he received 14 stitches above his brow and sustained a black eye. The injury, however, did not keep the 39th President from going out the next day and helping the nonprofit organization, Habitat for Humanity, build a home in Tennessee.

After a brief hospital visit, Carter stated he had a number one priory and that was to go to Nashville and build houses. The following day, he participated in his 36th building project with Habitat for Humanity.

President Carter, sending you ALL the healing vibes! Take it easy and we know you will be back at it in no time. Thanks for being such a shining example of kindness and strength. We need more heroes like you!

Carter appeared at the building site with his left eye bruised and swollen, wearing a bandage above his eye. He was joined by his wife, former First Lady Rosalynn Carter, who is 92-year-old. The couple recently became the longest-married first couple surpassing George and Barbara Bush with more than a whopping 73 years of marriage!

The former president is the oldest living former president in U.S. History, serving as President from 1977 to 1981. January 20, 2019, marked 38 years since he was succeeded by Ronald Raegan. He survived a cancer diagnosis in 2015 after doctors found melanoma in his liver and brain. After radiation treatment, it was later announced that he was cancer-free.