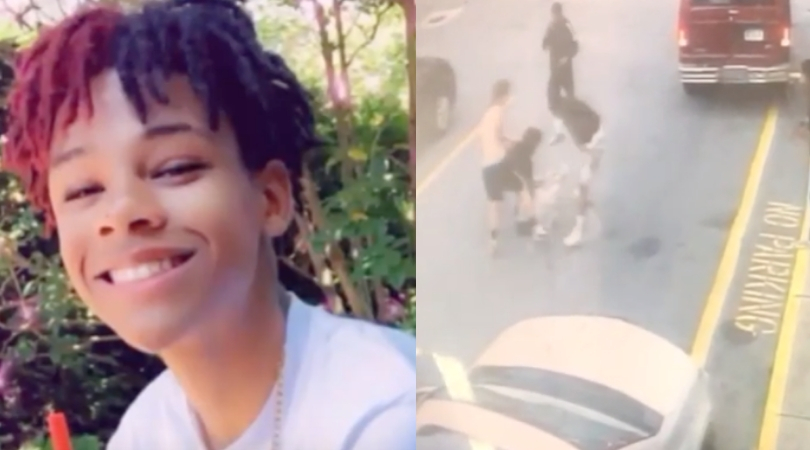 A 16-year-old boy was tragically stabbed to death in an attack that was witnessed by more than a dozen onlookers, some of who recorded video of the slaying, rather than help stop it. According to Nassau County Police, Khaseen Morris and a friend were set upon by as many as half a dozen people in an after school brawl in a strip mall parking lot in Oceanside, 20 miles east of Manhattan.

Morris was stabbed in the chest and his 17-year-old friend suffered swelling to his head and a broken arm.  Investigators believe at least 60 teenagers had gathered around the parking lot to watch the fight, while some live-streamed the fatal stabbing and posted in on social media, instead of calling 911. Nassau County Detective Lt. Stephen Fitzpatrick stated the attack appears to have been over a girl, and the “perception of who she might be dating or who she might be hanging with.”

Khaseen’s sister, Keyanna Morris, stated the senior at Oceanside High School had walked a girl home from a party earlier this week, which is what could have led to his slaying. The girl then allegedly told her ex-boyfriend that another boy had walked her home, which caused one of the attackers to get jealous. Nassau County Executive Laura Curran said additional police officers will patrol Oceanside High School and neighboring school districts.

The country has reached out to the District to ensure students have the mental health resources to support students. Through a statement, Curran stated, “I want to plead with all our residents — not just our young people: If you see someone in serious danger, please use your phone to get help — not likes and shares.”

18-year-old Tyler Flach was arrested and charged with murder in connection with the death of Morris. While in court he pleaded not guilty to murder charges and was ordered by the judge to be held without bail. He faces a second-degree murder charge.